From formulasearchengine
Revision as of 13:50, 17 December 2014 by en>Deeday-UK (→‎top: it's understood that details are below the lead)
(diff) ← Older revision | Latest revision (diff) | Newer revision → (diff)
Jump to navigation Jump to search 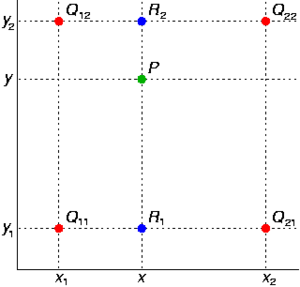 The four red dots show the data points and the green dot is the point at which we want to interpolate.

Example of bilinear interpolation on the unit square with the z-values 0, 1, 1 and 0.5 as indicated. Interpolated values in between represented by color.

The key idea is to perform linear interpolation first in one direction, and then again in the other direction. Although each step is linear in the sampled values and in the position, the interpolation as a whole is not linear but rather quadratic in the sample location.

We first do linear interpolation in the x-direction. This yields

We proceed by interpolating in the y-direction.

This gives us the desired estimate of f(x, y).

Note that we will arrive at the same result if the interpolation is done first along the y-direction and then along the x-direction.

Or equivalently, in matrix operations:

Contrary to what the name suggests, the bilinear interpolant is not linear; but it is the product of two linear functions.

Alternatively, the interpolant can be written as

In this geometric visualisation, the value at the black spot is the sum of the value at each coloured spot multiplied by the area of the rectangle of the same colour, divided by the total area of all four rectangles.

In both cases, the number of constants (four) correspond to the number of data points where f is given. The interpolant is linear along lines parallel to either the

is set constant. Along any other straight line, the interpolant is quadratic. However, even if the interpolation is not linear in the position (x and y), it is linear in the amplitude, as it is apparent from the equations above: all the coefficient bj, j=1..4, are proportional to the value of the function f(,).

In computer vision and image processing, bilinear interpolation is one of the basic resampling techniques.

In texture mapping, it is also known as bilinear filtering or bilinear texture mapping, and it can be used to produce a reasonably realistic image. An algorithm is used to map a screen pixel location to a corresponding point on the texture map. A weighted average of the attributes (color, alpha, etc.) of the four surrounding texels is computed and applied to the screen pixel. This process is repeated for each pixel forming the object being textured.[1]

When an image needs to be scaled up, each pixel of the original image needs to be moved in a certain direction based on the scale constant. However, when scaling up an image by a non-integral scale factor, there are pixels (i.e., holes) that are not assigned appropriate pixel values. In this case, those holes should be assigned appropriate RGB or grayscale values so that the output image does not have non-valued pixels.

Bilinear interpolation considers the closest 2x2 neighborhood of known pixel values surrounding the unknown pixel's computed location. It then takes a weighted average of these 4 pixels to arrive at its final, interpolated value. The weight on each of the 4 pixel values is based on the computed pixel's distance (in 2D space) from each of the known points.[2] 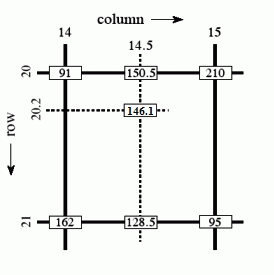 As seen in the example on the right, the intensity value at the pixel computed to be at row 20.2, column 14.5 can be calculated by first linearly interpolating between the values at column 14 and 15 on each rows 20 and 21, giving

and then interpolating linearly between these values, giving

This algorithm reduces some of the visual distortion caused by resizing an image to a non-integral zoom factor, as opposed to nearest neighbor interpolation, which will make some pixels appear larger than others in the resized image. Bilinear interpolation tends, however, to produce a greater number of interpolation artifacts (such as aliasing, blurring, and edge halos) than more computationally demanding techniques such as bicubic interpolation.[3]