In statistics and in probability theory, distance correlation is a measure of statistical dependence between two random variables or two random vectors of arbitrary, not necessarily equal dimension. An important property is that this measure of dependence is zero if and only if the random variables are statistically independent. This measure is derived from a number of other quantities that are used in its specification, specifically: distance variance, distance standard deviation and distance covariance. These take the same roles as the ordinary moments with corresponding names in the specification of the Pearson product-moment correlation coefficient.

These distance-based measures can be put into an indirect relationship to the ordinary moments by an alternative formulation (described below) using ideas related to Brownian motion, and this has led to the use of names such as Brownian covariance and Brownian distance covariance. 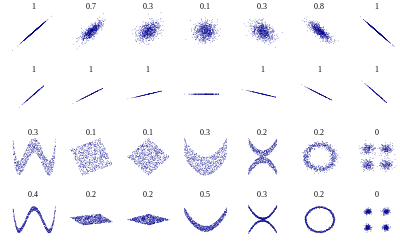 Several sets of (x, y) points, with the Distance correlation coefficient of x and y for each set. Compare to the graph on correlation

Let us start with the definition of the sample distance covariance. Let (Xk, Yk), k= 1, 2, ..., n be a statistical sample from a pair of real valued or vector valued random variables (X, Y). First, compute all pairwise distances

where || ⋅ || denotes Euclidean norm. That is, compute the n by n distance matrices (aj, k) and (bj, k). Then take all doubly centered distances

is the j-th row mean,

is thek-th column mean, and

is the grand mean of the distance matrix of the X sample. The notation is similar for the b values. (In the matrices of centered distances (Aj, k) and (Bj,k) all rows and all columns sum to zero.) The squared sample distance covariance is simply the arithmetic average of the products Aj, k Bj, k:

The statistic Tn = n dCov2n(X, Y) determines a consistent multivariate test of independence of random vectors in arbitrary dimensions. For an implementation see dcov.test function in the energy package for R.[4]

Finally, define the population value of squared distance covariance of X and Y as

One can show that this is equivalent to the following definition:

where E denotes expected value, and

are independent and identically distributed. Distance covariance can be expressed in terms of Pearson’s covariance, cov, as follows:

This identity shows that the distance covariance is not the same as the covariance of distances, cov(||X-X' ||, ||Y-Y' ||). This can be zero even if X and Y are not independent.

where ϕX, Y(s, t), ϕX(s), and ϕY(t) are the characteristic functions of (X, Y), X, and Y, respectively, p, q denote the Euclidean dimension of X and Y, and thus of s and t, and cp, cq are constants. The weight function

is an independent and identically distributed copy of

and has the same distribution as

The sample distance variance is the square root of

which is a relative of Corrado Gini’s mean difference introduced in 1912 (but Gini did not work with centered distances).

The distance standard deviation is the square root of the distance variance.

For easy computation of sample distance correlation see the dcor function in the energy package for R.[4]

implies that dimensions of the linear subspaces spanned by

samples respectively are almost surely equal and if we assume that these subspaces are equal, then in this subspace

for all constant vectors

(iii) If the random vectors

Equality holds if and only if

are both constants, or

are both constants, or

This last property is the most important effect of working with centered distances.

is a biased estimator of

if and only if every sample observation is identical.

for all constant vectors

Distance covariance can be generalized to include powers of Euclidean distance. Define

are independent if and only if

. It is important to note that this characterization does not hold for exponent

; in this case for bivariate

is a deterministic function of the Pearson correlation.[2] If

powers of the corresponding distances,

in a metric space with metric

This is non-negative for all such

has negative type if

is isometric to a subset of a Hilbert space.[10] If both metric spaces have strong negative type, then

Brownian covariance is motivated by generalization of the notion of covariance to stochastic processes. The square of the covariance of random variables X and Y can be written in the following form:

where E denotes the expected value and the prime denotes independent and identically distributed copies. We need the following generalization of this formula. If U(s), V(t) are arbitrary random processes defined for all real s and t then define the U-centered version of X by

whenever the subtracted conditional expected value exists and denote by YV the V-centered version of Y.[3][11][12] The (U,V) covariance of (X,Y) is defined as the nonnegative number whose square is

whenever the right-hand side is nonnegative and finite. The most important example is when U and V are two-sided independent Brownian motions /Wiener processes with expectation zero and covariance |s| + |t| - |s-t| = 2 min(s,t). (This is twice the covariance of the standard Wiener process; here the factor 2 simplifies the computations.) In this case the (U,V) covariance is called Brownian covariance and is denoted by

There is a surprising coincidence: The Brownian covariance is the same as the distance covariance:

On the other hand, if we replace the Brownian motion with the deterministic identity function id then Covid(X,Y) is simply the absolute value of the classical Pearson covariance,