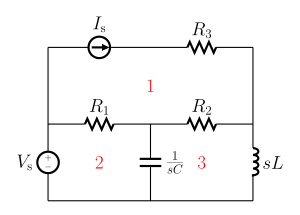 Figure 1: Essential meshes of the planar circuit labeled 1, 2, and 3. R1, R2, R3, 1/sc, and Ls represent the impedance of the resistors, capacitor, and inductor values in the s-domain. Vs and is are the values of the voltage source and current source, respectively.

Mesh analysis (or the mesh current method) is a method that is used to solve planar circuits for the currents (and indirectly the voltages) at any place in the circuit. Planar circuits are circuits that can be drawn on a plane surface with no wires crossing each other. A more general technique, called loop analysis (with the corresponding network variables called loop currents) can be applied to any circuit, planar or not. Mesh analysis and loop analysis both make use of Kirchhoff’s voltage law to arrive at a set of equations guaranteed to be solvable if the circuit has a solution.[1] Mesh analysis is usually easier to use when the circuit is planar, compared to loop analysis.[2] 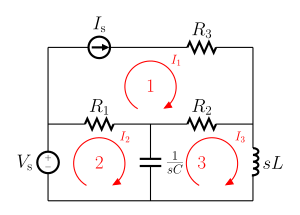 Figure 2: Circuit with mesh currents labeled as i1, i2, and i3. The arrows show the direction of the mesh current.

Setting up the equations

Figure 3: Circuit with a supermesh. Supermesh occurs because the current source is in between the essential meshes.