Probability theory is the branch of mathematics concerned with probability, the analysis of random phenomena.[1] The central objects of probability theory are random variables, stochastic processes, and events: mathematical abstractions of non-deterministic events or measured quantities that may either be single occurrences or evolve over time in an apparently random fashion. If an individual coin toss or the roll of dice is considered to be a random event, then if repeated many times the sequence of random events will exhibit certain patterns, which can be studied and predicted. Two representative mathematical results describing such patterns are the law of large numbers and the central limit theorem.

As a mathematical foundation for statistics, probability theory is essential to many human activities that involve quantitative analysis of large sets of data. Methods of probability theory also apply to descriptions of complex systems given only partial knowledge of their state, as in statistical mechanics. A great discovery of twentieth century physics was the probabilistic nature of physical phenomena at atomic scales, described in quantum mechanics.

The mathematical theory of probability has its roots in attempts to analyze games of chance by Gerolamo Cardano in the sixteenth century, and by Pierre de Fermat and Blaise Pascal in the seventeenth century (for example the "problem of points"). Christiaan Huygens published a book on the subject in 1657[2] and in the 19th century a big work was done by Laplace in what can be considered today as the classic interpretation.[3]

Consider an experiment that can produce a number of outcomes. The set of all outcomes is called the sample space of the experiment. The power set of the sample space is formed by considering all different collections of possible results. For example, rolling an honest die produces one of six possible results. One collection of possible results corresponds to getting an odd number. Thus, the subset {1,3,5} is an element of the power set of the sample space of die rolls. These collections are called events. In this case, {1,3,5} is the event that the die falls on some odd number. If the results that actually occur fall in a given event, that event is said to have occurred.

Probability is a way of assigning every "event" a value between zero and one, with the requirement that the event made up of all possible results (in our example, the event {1,2,3,4,5,6}) be assigned a value of one. To qualify as a probability distribution, the assignment of values must satisfy the requirement that if you look at a collection of mutually exclusive events (events that contain no common results, e.g., the events {1,6}, {3}, and {2,4} are all mutually exclusive), the probability that one of the events will occur is given by the sum of the probabilities of the individual events.[5] 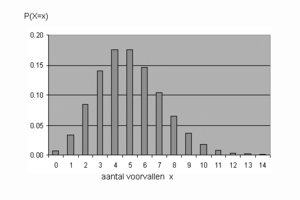 For example, if the event is "occurrence of an even number when a die is rolled", the probability is given by

, since 3 faces out of the 6 have even numbers and each face has the same probability of appearing.

Modern definition: The modern definition starts with a finite or countable set called the sample space, which relates to the set of all possible outcomes in classical sense, denoted by

. It is then assumed that for each element

is attached, which satisfies the following properties:

of the sample space

. The probability of the event 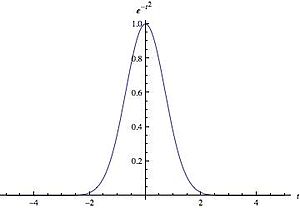 Continuous probability theory deals with events that occur in a continuous sample space.

Modern definition: If the outcome space of a random variable X is the set of real numbers (

) or a subset thereof, then a function called the cumulative distribution function (or cdf)

. That is, F(x) returns the probability that X will be less than or equal to x.

is absolutely continuous, i.e., its derivative exists and integrating the derivative gives us the cdf back again, then the random variable X is said to have a probability density function or pdf or simply density

, the probability of the random variable X being in

In case the probability density function exists, this can be written as

These concepts can be generalized for multidimensional cases on

and other continuous sample spaces.

The raison d'être of the measure-theoretic treatment of probability is that it unifies the discrete and the continuous cases, and makes the difference a question of which measure is used. Furthermore, it covers distributions that are neither discrete nor continuous nor mixtures of the two.

is the Dirac delta function.

Other distributions may not even be a mix, for example, the Cantor distribution has no positive probability for any single point, neither does it have a density. The modern approach to probability theory solves these problems using measure theory to define the probability space:

on it, a measure

is called a probability measure if

is the Borel σ-algebra on the set of real numbers, then there is a unique probability measure on

for any cdf, and vice versa. The measure corresponding to a cdf is said to be induced by the cdf. This measure coincides with the pmf for discrete variables and pdf for continuous variables, making the measure-theoretic approach free of fallacies.

The probability of a set

where the integration is with respect to the measure

Along with providing better understanding and unification of discrete and continuous probabilities, measure-theoretic treatment also allows us to work on probabilities outside

, as in the theory of stochastic processes. For example to study Brownian motion, probability is defined on a space of functions.

{{#invoke:main|main}} In probability theory, there are several notions of convergence for random variables. They are listed below in the order of strength, i.e., any subsequent notion of convergence in the list implies convergence according to all of the preceding notions.

converges weakly to the random variable

if their respective cumulative distribution functions

converge to the cumulative distribution function

Convergence in probability: The sequence of random variables

is said to converge towards the random variable

is said to converge towards the random variable

{{#invoke:main|main}} Common intuition suggests that if a fair coin is tossed many times, then roughly half of the time it will turn up heads, and the other half it will turn up tails. Furthermore, the more often the coin is tossed, the more likely it should be that the ratio of the number of heads to the number of tails will approach unity. Modern probability provides a formal version of this intuitive idea, known as the law of large numbers. This law is remarkable because it is not assumed in the foundations of probability theory, but instead emerges from these foundations as a theorem. Since it links theoretically derived probabilities to their actual frequency of occurrence in the real world, the law of large numbers is considered as a pillar in the history of statistical theory and has had widespread influence.[6]

The law of large numbers (LLN) states that the sample average

of a sequence of independent and identically distributed random variables

converges towards their common expectation

, provided that the expectation of

It follows from the LLN that if an event of probability p is observed repeatedly during independent experiments, the ratio of the observed frequency of that event to the total number of repetitions converges towards p.

for all i, so that

{{#invoke:main|main}} "The central limit theorem (CLT) is one of the great results of mathematics." (Chapter 18 in[7]) It explains the ubiquitous occurrence of the normal distribution in nature.

be independent random variables with mean

Then the sequence of random variables

converges in distribution to a standard normal random variable.

Notice that for some classes of random variables the classic central limit theorem works rather fast (see Berry–Esseen theorem), for example the distributions with finite first, second and third moment from the exponential family, on the other hand for some random variables of the heavy tail and fat tail variety, it works very slow or may not work at all: in such cases one may use the Generalized Central Limit Theorem (GCLT).

An English translation by Nathan Morrison appeared under the title Foundations of the Theory of Probability (Chelsea, New York) in 1950, with a second edition in 1956.

A lively introduction to probability theory for the beginner.