Solenoid valves are the most frequently used control elements in fluidics. Their tasks are to shut off, release, dose, distribute or mix fluids. They are found in many application areas. Solenoids offer fast and safe switching, high reliability, long service life, good medium compatibility of the materials used, low control power and compact design.

Besides the plunger-type actuator which is used most frequently, pivoted-armature actuators and rocker actuators are also used. 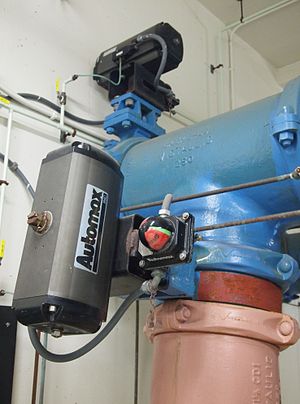 The solenoid valve (small black box at the top of the photo) with input air line (small green tube) used to actuate a larger rack and pinion actuator (gray box) which controls the water pipe valve.

When high pressures and large orifices are encountered, then high forces are required. To generate those forces, an internally piloted solenoid valve design may be possible.[1] In such a design, the line pressure is used to generate the high valve forces; a small solenoid controls how the line pressure is used. Internally piloted valves are used in dishwashers and irrigation systems where the fluid is water, the pressure might be Template:Convert and the orifice diameter might be Template:Convert.

In some solenoid valves the solenoid acts directly on the main valve. Others use a small, complete solenoid valve, known as a pilot, to actuate a larger valve. While the second type is actually a solenoid valve combined with a pneumatically actuated valve, they are sold and packaged as a single unit referred to as a solenoid valve. Piloted valves require much less power to control, but they are noticeably slower. Piloted solenoids usually need full power at all times to open and stay open, where a direct acting solenoid may only need full power for a short period of time to open it, and only low power to hold it.

A direct acting solenoid valve typically operates in 5 to 10 milliseconds. The operation time of a piloted valve depends on its size; typical values are 15 to 150 milliseconds.[4]

While there are multiple design variants, the following is a detailed breakdown of a typical solenoid valve design.

A solenoid valve has two main parts: the solenoid and the valve. The solenoid converts electrical energy into mechanical energy which, in turn, opens or closes the valve mechanically. A direct acting valve has only a small flow circuit, shown within section E of this diagram (this section is mentioned below as a pilot valve). In this example, a diaphragm piloted valve multiplies this small pilot flow, by using it to control the flow through a much larger orifice.

Solenoid valves may use metal seals or rubber seals, and may also have electrical interfaces to allow for easy control. A spring may be used to hold the valve opened (normally open) or closed (normally closed) while the valve is not activated. 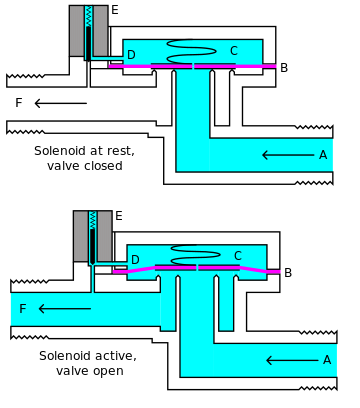 The diagram to the right shows the design of a basic valve, controlling the flow of water in this example. At the top figure is the valve in its closed state. The water under pressure enters at A. B is an elastic diaphragm and above it is a weak spring pushing it down. The diaphragm has a pinhole through its center which allows a very small amount of water to flow through it. This water fills the cavity C on the other side of the diaphragm so that pressure is equal on both sides of the diaphragm, however the compressed spring supplies a net downward force. The spring is weak and is only able to close the inlet because water pressure is equalized on both sides of the diaphragm.

Once the diaphragm closes the valve, the pressure on the outlet side of its bottom is reduced, and the greater pressure above holds it even more firmly closed. Thus, the spring is irrelevant to holding the valve closed.

The above all works because the small drain passage D was blocked by a pin which is the armature of the solenoid E and which is pushed down by a spring. If current is passed through the solenoid, the pin is withdrawn via magnetic force, and the water in chamber C drains out the passage D faster than the pinhole can refill it. The pressure in chamber C drops and the incoming pressure lifts the diaphragm, thus opening the main valve. Water now flows directly from A to F.

When the solenoid is again deactivated and the passage D is closed again, the spring needs very little force to push the diaphragm down again and the main valve closes. In practice there is often no separate spring; the elastomer diaphragm is molded so that it functions as its own spring, preferring to be in the closed shape.

Example core tubes. Non-magnetic core tubes are used to isolate the fluid from the coil. The core tube encloses the plugnut, the core spring, and the core. The coil slips over the core tube; a retaining clip engages the depression near the closed end of the core tube and holds the coil on the core tube.

Solenoid valve designs have many variations and challenges.

The core or plunger is the magnetic component that moves when the solenoid is energized. The core is coaxial with the solenoid. The core's movement will make or break the seals that control the movement of the fluid. When the coil is not energized, springs will hold the core in its normal position.

The plugnut is also coaxial.

The solenoid coil consists of many turns of copper wire that surround the core tube and induce the movement of the core. The coil is often encapsulated in epoxy. The coil also has an iron frame that provides a low magnetic path resistance.

The valve body must be compatible with the fluid; common materials are brass, stainless steel, aluminum, and plastic.[10]

The seals must be compatible with the fluid.

Many variations are possible on the basic, one-way, one-solenoid valve described above:

Besides controlling the flow of air and fluids, solenoids are used in pharmacology experiments, especially for patch-clamp, which can control the application of agonist or antagonist.[15]

In 1910, ASCO Numatics became the first company to develop and manufacture the solenoid valve.[16][17]