This modern form of Stokes' theorem is a vast generalization of a classical result first discovered by Lord Kelvin, who communicated it to George Stokes in July 1850.[1][2] Stokes set the theorem as a question on the 1854 Smith's Prize exam, which led to the result bearing his name.[2] This classical Kelvin–Stokes theorem relates the surface integral of the curl of a vector field F over a surface Σ in Euclidean three-space to the line integral of the vector field over its boundary ∂Σ:

This classical statement, as well as the classical Divergence theorem and Green's Theorem, are simply special cases of the general formulation stated above.

The fundamental theorem of calculus states that the integral of a function f over the interval [a, b] can be calculated by finding an antiderivative F of f:

be an oriented smooth manifold of dimension n and let

be an n-differential form that is compactly supported on

. First, suppose that α is compactly supported in the domain of a single, oriented coordinate chart {U, φ}. In this case, we define the integral of

More generally, the integral of

is defined as follows: Let {ψi} be a partition of unity associated with a locally finite cover {Ui, φi} of (consistently oriented) coordinate charts, then define the integral

denotes the boundary of

with its induced orientation, then 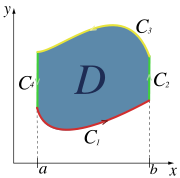 A "normal" integration manifold (here called D instead of

is the exterior derivative, which is defined using the manifold structure only. On the r.h.s., a circle is sometimes used within the integral sign to stress the fact that the (n-1)-manifold

is closed.[3] The r.h.s. of the equation is often used to formulate integral laws; the l.h.s. then leads to equivalent differential formulations (see below).

The theorem is often used in situations where

A proof becomes particularly simple if the submanifold

is a so-called "normal manifold", as in the figure on the r.h.s., which can be segmented into vertical stripes (e.g. parallel to the xn direction), such that after a partial integration concerning this variable, nontrivial contributions come only from the upper and lower boundary surfaces (coloured in yellow and red, respectively), where the complementary mutual orientations are visible through the arrows.

Differential k-forms can be integrated over a k-simplex in a natural way, by pulling back to Rk. Extending by linearity allows one to integrate over chains. This gives a linear map from the space of k-forms to the k-th group in the singular cochain, Sk*, the linear functionals on Sk. In other words, a k-form

De Rham's theorem shows that this homomorphism is in fact an isomorphism. So the converse to 1 and 2 above hold true. In other words, if {ci} are cycles generating the k-th homology group, then for any corresponding real numbers, {ai}, there exist a closed form,

The general form of the Stokes theorem using differential forms is more powerful and easier to use than the special cases. Because in Cartesian coordinates the traditional versions can be formulated without the machinery of differential geometry they are more accessible, older and have familiar names. The traditional forms are often considered more convenient by practicing scientists and engineers but the non-naturalness of the traditional formulation becomes apparent when using other coordinate systems, even familiar ones like spherical or cylindrical coordinates. There is potential for confusion in the way names are applied, and the use of dual formulations.

An illustration of the Kelvin–Stokes theorem, with surface

and the "normal" vector n.

One consequence of the formula is that the field lines of a vector field with zero curl cannot be closed contours.

The formula can be rewritten as:

These variants are frequently used:

The above listed subset of Maxwell's equations are valid for electromagnetic fields expressed in SI units. In other systems of units, such as CGS or Gaussian units, the scaling factors for the terms differ. For example, in Gaussian units, Faraday's law of induction and Ampère's law take the forms[4][5]