-quadratic forms, particularly in the context of surgery theory.

The theory is 2-local: away from 2, ε-quadratic forms are equivalent to ε-symmetric forms: half the symmetrization map (below) gives an explicit isomorphism.

Given a module M over a *-ring R, let B(M) be the space of bilinear forms on M, and let T: B(M) → B(M) be the "conjugate transpose" involution B(u,v) ↦ B(v,u)*. Let ε = ±1; then εT is also an involution. Define the ε-symmetric forms as the invariants of εT, and the ε-quadratic forms are the coinvariants.

As an exact sequence,

As kernel (algebra) and cokernel,

The notation Qε(M), Qε(M) follows the standard notation MG, MG for the invariants and coinvariants for a group action, here of the order 2 group (an involution).

More generally, one can take for ε ∈ R any element such that ε*ε =1. ε = ±1 always satisfy this, but so does any element of norm 1, such as complex numbers of unit norm.

For instance, in the ring

(the integral lattice for the quadratic form 2x2-2x+1), with complex conjugation,

In terms of matrices, (we take V to be 2-dimensional):

which is a quotient map with kernel

An intuitive way to understand an ε-quadratic form is to think of it as a quadratic refinement of its associated ε-symmetric form.

For instance, in defining a Clifford algebra over a general field or ring, one quotients the tensor algebra by relations coming from the symmetric form and the quadratic form: vw + wv = 2B(v,w) and

. If 2 is invertible, this second relation follows from the first (as the quadratic form can be recovered from the associated bilinear form), but at 2 this additional refinement is necessary.

. The standard hyperbolic ε-quadratic form is needed for the definition of L-theory.

For the field of two elements R = F2 there is no difference between (+1)-quadratic and (−1)-quadratic forms, which are just called quadratic forms. The Arf invariant of a nonsingular quadratic form over F2 is an F2-valued invariant with important applications in both algebra and topology, and plays a role similar to that played by the discriminant of a quadratic form in characteristic not equal to two.

Template:Rellink The free part of the middle homology group (with integer coefficients) of an oriented even-dimensional manifold has an ε-symmetric form, via Poincaré duality, the intersection form. In the case of singly even dimension

this is skew-symmetric, while for doubly even dimension

this is symmetric. Geometrically this corresponds to intersection, where two n/2-dimensional submanifolds in an n-dimensional manifold generically intersect in a 0-dimensional submanifold (a set of points), by adding codimension. For singly even dimension the order switches sign, while for doubly even dimension order does not change sign, hence the ε-symmetry. The simplest cases are for the product of spheres, where the product

respectively give the symmetric form

In dimension two, this yields a torus, and taking the connected sum of g tori yields the surface of genus g, whose middle homology has the standard hyperbolic form. 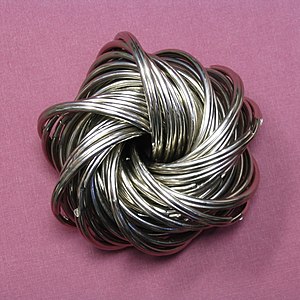 In the standard embedding of the torus, a (1,1) curve self-links, thus

For the standard embedded torus, the skew-symmetric form is given by

(with respect to the standard symplectic basis), and the skew-quadratic refinement is given by xy with respect to this basis: Q(1,0) = Q(0,1)=0: the basis curves don't self-link; and Q(1,1) = 1: a (1,1) self-links, as in the Hopf fibration. (This form has Arf invariant 0, and thus this embedded torus has Kervaire invariant 0.)

A key application is in algebraic surgery theory, where even L-groups are defined as Witt groups of ε-quadratic forms, by C.T.C.Wall