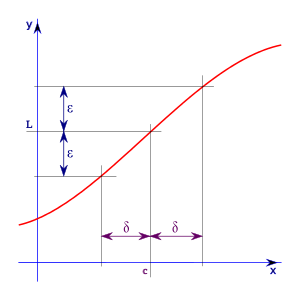 Whenever a point x is within δ units of c, f(x) is within ε units of L

) definition of limit in his Cours d'Analyse, but occasionally used

arguments in proofs. The definitive modern statement was ultimately provided by Karl Weierstrass.[1][2]

Isaac Newton was aware, in the context of the derivative concept, that the limit of the ratio of evanescent quantities was not itself a ratio, as when he wrote:

Those ultimate ratios ... are not actually ratios of ultimate quantities, but limits ... which they can approach so closely that their difference is less than any given quantity...

Occasionally Newton explained limits in terms similar to the epsilon-delta definition.[3] Augustin-Louis Cauchy gave a definition of limit in terms of a more primitive notion he called a variable quantity. He never gave an epsilon-delta definition of limit (Grabiner 1981). Some of Cauchy's proofs contain indications of the epsilon, delta method. Whether or not his foundational approach can be considered a harbinger of Weierstrass's is a subject of scholarly dispute. Grabiner feels that it is, while Schubring (2005) disagrees{{ safesubst:#invoke:Unsubst||$N=Dubious |date=__DATE__ |$B= {{#invoke:Category handler|main}}[dubious – discuss] }}.[1]

Let f be a function. To say that

means that f(x) can be made as close as desired to L by making the independent variable x close enough, but not equal, to the value c.

The letters ε and δ can be understood as "error" and "distance", and in fact Cauchy used ε as an abbreviation for "error" in some of his work.[1] In these terms, the error (ε) in the measurement of the value at the limit can be made as small as desired by reducing the distance (δ) to the limit point.

This definition also works for functions with more than one argument. For such functions, δ can be understood as the radius of a circle or a sphere or some higher-dimensional analogy centered at the point where the existence of a limit is being proven, in the domain of the function and, for which, every point inside maps to a function value less than ε away from the value of the function at the limit point.

definition of the limit of a function is as follows:[4]

be a function defined on a subset

be a limit point of

be a real number. Then

is defined to mean

such that for all

Let us prove the statement that

This is easily shown through graphical understandings of the limit, and as such serves as a strong basis for introduction to proof. According to the formal definition above, a limit statement is correct if and only if confining

. In this specific case, this means that the statement is true if and only if confining

units of 5 will inevitably confine

units of 12. The overall key to showing this implication is to demonstrate how

must be related to each other such that the implication holds. Mathematically, we want to show that

Simplifying, factoring, and dividing 3 on the right hand side of the implication yields

which immediately gives the required result if we choose

Thus the proof is completed. The key to the proof lies in the ability of one to choose boundaries in

, and then conclude corresponding boundaries in

, which in this case were related by a factor of 3, which is entirely due to the slope of 3 in the line

A function f is said to be continuous at c if it is both defined at c and its value at c equals the limit of f as x approaches c:

f is said to be continuous on an interval I if it is continuous at every point c of I.

Keisler proved that a hyperreal definition of limit reduces the quantifier complexity by two quantifiers.[5] Namely,

converges to a limit L as

tends to a if and only if for every infinitesimal e, the value