Aberrations of the eye

The eye, like any other optical system, suffers from a number of specific optical aberrations. The optical quality of the eye is limited by optical aberrations, diffraction and scatter.[1] Correction of spherocylindrical refractive errors has been possible for nearly two centuries following Airy's development of method's to measure and correct ocular astigmatism. It has only recently become possible to measure the aberrations of the eye and with the advent of refractive surgery it might be possible to correct certain types of irregular astigmatism.

The appearance of visual complaints such as halos, glare and monocular diplopia after corneal refractive surgery has long been correlated with the induction of optical aberrations. Several mechanisms may explain the increase in the amount of higher-order aberrations with conventional eximer laser refractive procedures: a change in corneal shape toward oblateness or prolateness (after myopic and hyperopic ablations respectively), insufficient optical zone size and imperfect centration. These adverse effects are particularly noticeable when the pupil is large.[2]

Wavefront approach to aberrations of the eye

A wavefront is a surface over which an optical disturbance has a constant phase. Rays and wavefronts are two mutually complementary approaches to light propagation. Wavefronts are always normal (perpendicular) to the rays.

In normal population the dominant aberrations are the ordinary second-order spherocylindrical focus errors, which are called refractive errors. Higher order aberrations are a relatively small component, comprising about 10% of the eye’s total aberrations.[3] High order aberrations increase with age and mirror symmetry exists between the right and the left eyes.[4] 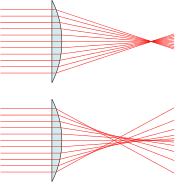 There are numerous higher-order aberrations, of which only spherical aberration, coma and trefoil are of clinical interest.

Spherical aberration is the cause of night myopia and is commonly increased after myopic LASIK and surface ablation. It results in halos around point images. Spherical aberration exacerbates myopia in low light (night myopia). In brighter conditions, the pupil constricts, blocking the more peripheral rays and minimizing the effect of spherical aberration. As the pupil enlarges, more peripheral rays enter the eye and the focus shifts anteriorly, making the patient slightly more myopic in low-light conditions. In general, the increase in overall wave aberration with pupil size has been reported to increase to approximately the second power of the pupil radius. This is because of the fact that most wave aberration is due to the 2nd order aberrations which have a square radius dependency.[5] The effect of spherical aberration increases as the fourth power of the pupil diameter. Doubling pupil diameter increases spherical aberration 16 times.[7] Thus, a small change in pupil size can cause a significant change in refraction. This possibility should be considered in patients who have fluctuating vision despite well-healed corneas following keratorefractive surgery. 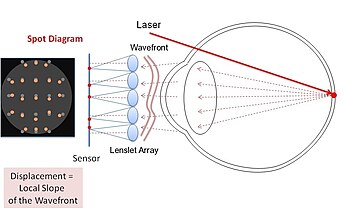 Many techniques for measuring the eye’s aberrations have been described, The most common technique is Shack-Hartmann aberrometry. Other methods include Tscherning systems, ray tracing and Skiascopy methods.[2][8]

Quantitative comparisons between different eyes and conditions are usually made using RMS (root mean square). In order to measure RMS, for each type of aberration the difference between the aberration and mean value is squared and averaged across the pupil area. Different kinds of aberrations may have equal RMS across the pupil but have different effects on vision, therefore, RMS error is unrelated to visual performance. The majority of eyes have total RMS values less than 0.3 µm.[6]

The most common method of classifying the shapes of aberration maps is to consider each map as the sum of fundamental shapes or basis functions. One popular set of basis functions are the Zernike polynomials.[2] Each aberration may be positive or negative in value and induces predictable alterations in the image quality.[9] Because there is no limit to the number of terms that may be used by Zernike polynomials, vision scientists use the first 15 polynomials, based on the fact that they are enough to obtain a highly accurate description of the most common aberrations found in human eye.[10] Among these the most important Zernike coefficients affecting visual quality are coma, spherical aberration, and trefoil.[6]

Zernike polynomials are usually expressed in terms of polar coordinates (ρ,θ), where ρ is radial coordinate and θ is the angle. The advantage of expressing the aberrations in terms of these polynomials includes the fact that the polynomials are independent of one another. For each polynomial the mean value of the aberration across the pupil is zero and the value of the coefficient gives the RMS error for that particular aberration (i.e. the coefficients show the relative contribution of each Zernike mode to the total wavefront error in the eye).[4] However these polynomials have the disadvantage that their coefficients are only valid for the particular pupil diameter for which they are determined.

In each Zernike polynomial

are usually called secondary Astigmatism and should not cause confusion. The superscript m is called the angular frequency and denotes the number of times the Wavefront pattern repeats itself.[4] 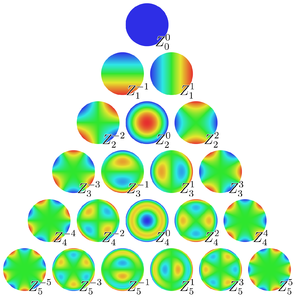 Plots of Zernike polynomials in the unit disk

Customized Wavefront-guided refractive corneal laser treatments are designed to reduce existing aberrations and to help prevent the creation of new aberrations.[6] The wavefront map of the eye may be transferred to a Lasik system and enable the surgeon to treat the aberration. Perfect alignment of the treatment and the pupil on which the Wavefront is measured is required, which is usually achieved through iris feature detection. An efficient eye tracking system and small spot size laser is necessary for treatment . Wavefront customization of ablation increases the depth of ablation because additional corneal tissue must be ablated to compensate for the high order aberrations.[2] Actual results with Wavefront guided LASIK showed that not only it cannot remove HOA but also the optical aberrations are increased. However, the amount of increase in aberrations are less than conventional Lasik.[12] Corneal optical aberrations after photorefractive keratectomy with a larger ablation zone and a transition zone are less pronounced and more physiologic than those associated with first-generation (5 mm) ablations with no transition zone.[13]

Wavefront customized lenses can be used in eyeglasses. Based on Wavefront map of the eye and with the use of laser a lens is shaped to compensate for the aberrations of the eye and then put in the eyeglasses. Ultraviolet Laser can alter the refractive index of curtain lens materials such as epoxy polymer on a point by point basis in order to generate the desired refractive profile.[1]

Wavefront customized contact lenses can theoretically correct HOA. The rotation and decentration reduces the predictability of this method.[1]