An acid–base reaction is a chemical reaction that occurs between an acid and a base. Several concepts exist that provide alternative definitions for the reaction mechanisms involved and their application in solving related problems. Despite several differences in definitions, their importance becomes apparent as different methods of analysis when applied to acid–base reactions for gaseous or liquid species, or when acid or base character may be somewhat less apparent. The first of these scientific concepts of acids and bases was provided by the French chemist Antoine Lavoisier, circa 1776.[1] 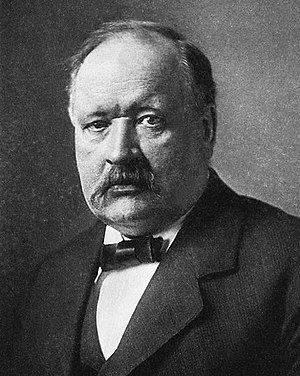 The first modern definition of acids and bases was devised by Svante Arrhenius. A hydrogen theory of acids, it followed from his 1884 work with Friedrich Wilhelm Ostwald in establishing the presence of ions in aqueous solution and led to Arrhenius receiving the Nobel Prize in Chemistry in 1903.

As defined by Arrhenius:

This causes the protonation of water, or the creation of the hydronium (H3O+) ion.[5] Thus, in modern times, the use of H+ is regarded as a shorthand for H3O+, because it is now known that a bare proton does not exist as a free species in aqueous solution.[6]

The Arrhenius definitions of acidity and alkalinity are restricted to aqueous solutions, and refer to the concentration of the solvent ions. Under this definition, pure H2SO4 and HCl dissolved in toluene are not acidic, and molten NaOH and solutions of calcium amide in liquid ammonia are not alkaline.

Overall, to qualify as an Arrhenius acid, upon the introduction to water, the chemical must either cause, directly or otherwise:

Conversely, to qualify as an Arrhenius base, upon the introduction to water, the chemical must either cause, directly or otherwise:

The universal aqueous acid–base definition of the Arrhenius concept is described as the formation of a water molecule from a proton and hydroxide ion. This leads to the definition that in Arrhenius acid–base reactions, a salt and water are formed from the reaction between an acid and a base.[2] This is a neutralization reaction - the acid and base properties of H+ and OH− are neutralized, for they combine to form H2O, the water molecule. The acid-base neutralization reaction can be put into a word equation:

The positive ion from a base and the negative ion from an acid form a salt together - in other words, an acid-base neutralization reaction is a double-replacement reaction. For example, when a neutralization reaction takes place between hydrochloric acid (HCl) and sodium hydroxide (NaOH), the products are sodium chloride (common table salt) and water.

One of the limitations of the Arrhenius definition is its reliance on water solutions. Edward C. Franklin studied the acid–base reactions in liquid ammonia in 1905 and pointed out the similarities to the water-based Arrhenius theory. Albert F. O. Germann, working with liquid Template:Chem, formulated the solvent-based theory in 1925, thereby generalizing the Arrhenius definition to cover aprotic solvents.[7]

Germann pointed out that in many solutions, there are ions in equilibrium with the neutral solvent molecules:

For example, water and ammonia undergo such dissociation into hydronium and hydroxide, and ammonium and amide, respectively:

Some aprotic systems also undergo such dissociation, such as dinitrogen tetroxide into nitrosonium and nitrate, antimony trichloride into dichloroantimonium and tetrachloroantimonate, and phosgene into chlorocarboxonium and chloride:

Nitric acid can be a base in liquid sulfuric acid:

The unique strength of this definition shows in describing the reactions in aprotic solvents; for example, in liquid Template:Chem:

Because the solvent system definition depends on the solute as well as on the solvent itself, a particular solute can be either an acid or a base depending on the choice of the solvent: Template:Chem is a strong acid in water, a weak acid in acetic acid, and a weak base in fluorosulfonic acid; this characteristic of the theory has been seen as both a strength and a weakness, because some substances (such as Template:Chem and Template:Chem) have been seen to be acidic or basic on their own right. On the other hand, solvent system theory has been criticized as being too general to be useful. Also, it has been thought that there is something intrinsically acidic about hydrogen compounds, a property not shared by non-hydrogenic solvonium salts.[10]

The Brønsted–Lowry definition, formulated in 1923, independently by Johannes Nicolaus Brønsted in Denmark and Martin Lowry in England, is based upon the idea of protonation of bases through the de-protonation of acids – that is, the ability of acids to "donate" hydrogen ions (H+)—otherwise known as protons—to bases, which "accept" them.[11] It is important to note that the theory does not refer to the removal of a proton from the nucleus of an atom, which would require levels of energy not attainable through the simple dissociation of acids, but to removal of a hydrogen ion (H+).

Unlike the previous definitions, the Brønsted–Lowry definition does not refer to the formation of salt and solvent, but instead to the formation of conjugate acids and conjugate bases, produced by the transfer of a proton from the acid to the base.[2][11] In this approach, acids and bases are fundamentally different in behavior from salts, which are seen as electrolytes, subject to the theories of Debye, Onsager, and others. An acid and a base react not to produce a salt and a solvent, but to form a new acid and a new base. The concept of neutralization is thus absent.[10] Brønsted–Lowry acid–base behavior is formally independent of any solvent, making it more all-encompassing than the Arrhenius model.

The general formula for acid–base reactions according to the Brønsted–Lowry definition is:

For example, a Brønsted-Lowry model for the dissociation of hydrochloric acid (HCl) in aqueous solution would be the following:

The removal of H+ from the HCl produces the chloride ion, Cl−, the conjugate base of the acid. The addition of H+ to the H2O (acting as a base) forms the hydronium ion, H3O+, the conjugate acid of the base.

Water is amphoteric—that is, it can act as both an acid and a base. The Brønsted-Lowry model explains this, showing the dissociation of water into low concentrations of hydronium and hydroxide ions:

This equation is demonstrated in the image below:

As an example of water acting as an acid, consider an aqueous solution of ammonia (NH3)

Furthermore, in the Brønsted-Lowry model, the solvent does not necessarily have to be water. For example, consider the reaction of ammonia, a base, with acetic acid (CH3COOH) in absence of water.

The Brønsted–Lowry model calls hydrogen-containing substances (like HCl) acids. Thus, some substances, which many chemists considered to be acids, such as SO3 or BCl3, are excluded from this classification due to lack of hydrogen. Gilbert N. Lewis wrote in 1938, "To restrict the group of acids to those substances that contain hydrogen interferes as seriously with the systematic understanding of chemistry as would the restriction of the term oxidizing agent to substances containing oxygen."[10] Furthermore, KOH and KNH2 are not considered Brønsted bases, but rather salts containing the bases OH− and NH2−.

Template:Rellink The hydrogen requirement of Arrhenius and Brønsted–Lowry was removed by the Lewis definition of acid–base reactions, devised by Gilbert N. Lewis in 1923,[13] in the same year as Brønsted–Lowry, but it was not elaborated by him until 1938.[10] Instead of defining acid–base reactions in terms of protons or other bonded substances, the Lewis definition defines a base (referred to as a Lewis base) to be a compound that can donate an electron pair, and an acid (a Lewis acid) to be a compound that can receive this electron pair.[14]

In this system, an acid does not exchange atoms with a base, but combines with it. For example, consider this classical aqueous acid–base reaction:

The result of this reaction is the formation of an ammonia–silver adduct.

In reactions between Lewis acids and bases, there is the formation of an adduct[14] when the highest occupied molecular orbital (HOMO) of a molecule, such as Template:Chem with available lone electron pair(s) donates lone pairs of electrons to the electron-deficient molecule's lowest unoccupied molecular orbital (LUMO) through a co-ordinate covalent bond; in such a reaction, the HOMO-interacting molecule acts as a base, and the LUMO-interacting molecule acts as an acid.[14] In highly-polar molecules, such as boron trifluoride (Template:Chem),[14] the most electronegative element pulls electrons towards its own orbitals, providing a more positive charge on the less-electronegative element and a difference in its electronic structure due to the axial or equatorial orbiting positions of its electrons, causing repulsive effects from lone pair – bonding pair (Lp–Bp) interactions between bonded atoms in excess of those already provided by bonding pair – bonding pair (Bp–Bp) interactions.[14] Adducts involving metal ions are referred to as co-ordination compounds.[14]

This acid–base theory was a revival of oxygen theory of acids and bases, proposed by German chemist Hermann Lux[15][16] in 1939, further improved by Håkon Flood circa 1947[17] and is still used in modern geochemistry and electrochemistry of molten salts. This definition describes an acid as an oxide ion (Template:Chem) acceptor and a base as an oxide ion donor. For example:[18]

{{#invoke:main|main}} In 1963,[19] Ralph Pearson proposed an advanced qualitative concept known as Hard Soft Acid Base principle, later made quantitative with help of Robert Parr in 1984. 'Hard' applies to species that are small, have high charge states, and are weakly polarizable. 'Soft' applies to species that are large, have low charge states and are strongly polarizable. Acids and bases interact, and the most stable interactions are hard–hard and soft–soft. This theory has found use in organic and inorganic chemistry.

Mikhail Usanovich developed a general theory that does not restrict acidity to hydrogen-containing compounds, but his approach, published in 1938, was even more general than Lewis theory.[10] Usanovich's theory can be summarized as defining an acid as anything that accepts negative species or donates positive ones, and a base as the reverse. This defined the concept of redox (oxidation-reduction) as a special case of acid-base reactions

Some examples of Usanovich acid-base reactions include:

{{#invoke:main|main}} An acid–alkali reaction is a special case of an acid–base reaction, where the base used is also an alkali. When an acid reacts with an alkali it forms a metal salt and water. Acid–alkali reactions are also a type of neutralization reaction.

In general, acid–alkali reactions can be simplified to

To produce hydroxide ions in water, the alkali breaks apart into ions as below:

The first scientific concept of acids and bases was provided by Lavoisier circa 1776. Since Lavoisier's knowledge of strong acids was mainly restricted to oxoacids, such as Template:Chem (nitric acid) and Template:Chem (sulfuric acid), which tend to contain central atoms in high oxidation states surrounded by oxygen, and since he was not aware of the true composition of the hydrohalic acids (HF, HCl, HBr, and HI), he defined acids in terms of their containing oxygen, which in fact he named from Greek words meaning "acid-former" (from the Greek οξυς (oxys) meaning "acid" or "sharp" and γεινομαι (geinomai) meaning "engender"). The Lavoisier definition was held as absolute truth for over 30 years, until the 1810 article and subsequent lectures by Sir Humphry Davy in which he proved the lack of oxygen in H2S, H2Te, and the hydrohalic acids. However, Davy failed to develop a new theory, concluding that "acidity does not depend upon any particular elementary substance, but upon peculiar arrangement of various substances".[10] One notable modification of oxygen theory was provided by Berzelius, who stated that acids are oxides of nonmetals while bases are oxides of metals.

Circa 1838 Justus von Liebig proposed[20] that an acid is a hydrogen-containing substance in which the hydrogen could be replaced by a metal.[21] This redefinition was based on his extensive work on the chemical composition of organic acids, finishing the doctrinal shift from oxygen-based acids to hydrogen-based acids started by Davy. Liebig's definition, while completely empirical, remained in use for almost 50 years until the adoption of the Arrhenius definition.[22]