In mathematics, an algebraic number is a number that is a root of a non-zero polynomial in one variable with rational coefficients (or equivalently — by clearing denominators — with integer coefficients). Numbers such as π that are not algebraic are said to be transcendental. Almost all real and complex numbers are transcendental. (Here "almost all" has the sense "all but a countable set"; see Properties.)

The field of algebraic numbers 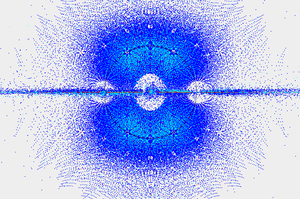 All numbers that can be obtained from the integers using a finite number of integer additions, subtractions, multiplications, divisions, and taking nth roots (where n is a positive integer) are algebraic. The converse, however, is not true: there are algebraic numbers that cannot be obtained in this manner. All of these numbers are solutions to polynomials of degree ≥5. This is a result of Galois theory (see Quintic equations and the Abel–Ruffini theorem). An example of such a number is the unique real root of the polynomial x5 − x − 1 (which is approximately 1.167304).