In magnetostatics, the force of attraction or repulsion between two current-carrying wires (see first figure below) is often called Ampère's force law. The physical origin of this force is that each wire generates a magnetic field, as defined by the Biot–Savart law, and the other wire experiences a magnetic force as a consequence, as defined by the Lorentz force.

The best-known and simplest example of Ampère's force law, which underlies the definition of the ampere, the SI unit of current, states that the force per unit length between two straight parallel conductors is

where kA is the magnetic force constant, r is the separation of the wires, and I1, I2 are the direct currents carried by the wires. This is a good approximation for finite lengths if the distance between the wires is small compared to their lengths, but large compared to their diameters. The value of kA depends upon the system of units chosen, and the value of kA decides how large the unit of current will be. In the SI system,[1] [2]

with μ0 the magnetic constant, defined in SI units as[3][4]

The general formulation of the magnetic force for arbitrary geometries is based on iterated line integrals and combines the Biot–Savart law and Lorentz force in one equation as shown below. [5]

To determine the force between wires in a material medium, the magnetic constant is replaced by the actual permeability of the medium. 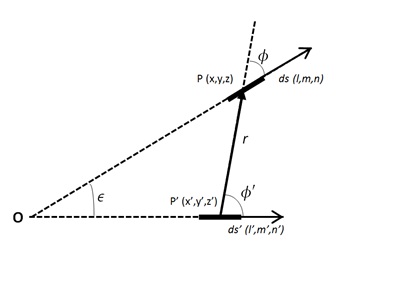 The form of Ampere's force law commonly given was derived by Maxwell and is one of several expressions consistent with the original experiments of Ampere and Gauss. The x-component of the force between two linear currents I and I’, as depicted in the diagram to the right, was given by Ampere in 1825 and Gauss in 1833 as follows:[8]

Following Ampere, a number of scientists, including Wilhelm Weber, Rudolf Clausius, James Clerk Maxwell, Bernhard Riemann and Walter Ritz, developed this expression to find a fundamental expression of the force. Through differentiation, it can be shown that:

and also the identity:

With these expressions, Ampere's force law can be expressed as:

Ampere's results can be expressed in the form:

As Maxwell noted, terms can be added to this expression, which are derivatives of a function Q(r) and, when integrated, cancel each other out. Thus, Maxwell gave "the most general form consistent with the experimental facts" for the force on ds arising from the action of ds':[9]

Q is a function of r, according to Maxwell, which "cannot be determined, without assumptions of some kind, from experiments in which the active current forms a closed circuit." Taking the function Q(r) to be of the form:

We obtain the general expression for the force exerted on ds by ds:

Integrating around s' eliminates k and the original expression given by Ampere and Gauss is obtained. Thus, as far as the original Ampere experiments are concerned, the value of k has no significance. Ampere took k=-1; Gauss took k=+1, as did Grassmann and Clausius, although Clausius omitted the S component. In the non-ethereal electron theories, Weber took k=-1 and Riemann took k=+1. Ritz left k undetermined in his theory. If we take k = -1, we obtain the Ampere expression:

Using the vector identity for the triple cross product, we may express this result as

When integrated around ds' the second term is zero, and thus we find the form of Ampere's force law given by Maxwell:

Start from the general formula:

and the differential element of wire 2 is at

. By properties of line integrals,

Therefore the integral is

If wire 1 is also infinite, the integral diverges, because the total attractive force between two infinite parallel wires is infinity. In fact, we want to know the attractive force per unit length of wire 1. Therefore, assume wire 1 has a large but finite length

. Then the force vector felt by wire 1 is:

As expected, the force that the wire feels is proportional to its length. The force per unit length is:

The direction of the force is along the y-axis, representing wire 1 getting pulled towards wire 2 if the currents are parallel, as expected. The magnitude of the force per unit length agrees with the expression for