In complex analysis, a branch of mathematics, analytic continuation is a technique to extend the domain of a given analytic function. Analytic continuation often succeeds in defining further values of a function, for example in a new region where an infinite series representation in terms of which it is initially defined becomes divergent.

The step-wise continuation technique may, however, come up against difficulties. These may have an essentially topological nature, leading to inconsistencies (defining more than one value). They may alternatively have to do with the presence of mathematical singularities. The case of several complex variables is rather different, since singularities then cannot be isolated points, and its investigation was a major reason for the development of sheaf cohomology. 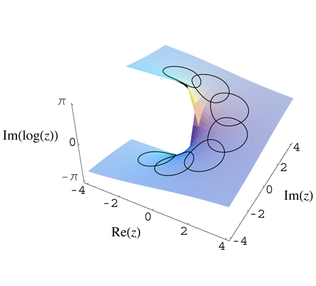 then F is called an analytic continuation of f. In other words, the restriction of F to U is the function f we started with.

Analytic continuations are unique in the following sense: if V is the connected domain of two analytic functions F1 and F2 such that U is contained in V and for all z in U

on all of V. This is because F1 − F2 is an analytic function which vanishes on the open, connected domain U of f and hence must vanish on its entire domain. This follows directly from the identity theorem for holomorphic functions.

A common way to define functions in complex analysis proceeds by first specifying the function on a small domain only, and then extending it by analytic continuation. In practice, this continuation is often done by first establishing some functional equation on the small domain and then using this equation to extend the domain. Examples are the Riemann zeta function and the gamma function.

The power series defined below is generalized by the idea of a germ. The general theory of analytic continuation and its generalizations are known as sheaf theory.

Formal definition of a germ

Note that without loss of generality, here and below, we will always assume that a maximal such r was chosen, even if that r is ∞. Also note that it would be equivalent to begin with an analytic function defined on some small open set. We say that the vector

Any vector g = (z0, α0, α1, ...) is a germ if it represents a power series of an analytic function around z0 with some radius of convergence r > 0. Therefore, we can safely speak of the set of germs

The topology of the set of germs

Let g and h be germs. If |h0 − g0| < r where r is the radius of convergence of g and if the power series defined by g and h specify identical functions on the intersection of the two domains, then we say that h is generated by (or compatible with) g, and we write g ≥ h. This compatibility condition is neither transitive, symmetric nor antisymmetric. If we extend the relation by transitivity, we obtain a symmetric relation, which is therefore also an equivalence relation on germs (but not an ordering). This extension by transitivity is one definition of analytic continuation. The equivalence relation will be denoted

We can define a topology on

define a basis of open sets for the topology on

A connected component of

(i.e., an equivalence class) is called a sheaf. We also note that the map defined by φg(h) = h0 from Ur(g) to C where r is the radius of convergence of g, is a chart. The set of such charts forms an atlas for

is a Riemann surface.

This germ has a radius of convergence of 1, and so there is a sheaf S corresponding to it. This is the sheaf of the logarithm function.

The uniqueness theorem for analytic functions also extends to sheaves of analytic functions: if the sheaf of an analytic function contains the zero germ (i.e., the sheaf is uniformly zero in some neighborhood) then the entire sheaf is zero. Armed with this result, we can see that if we take any germ g of the sheaf S of the logarithm function, as described above, and turn it into a power series f(z) then this function will have the property that exp(f(z)) = z. If we had decided to use a version of the inverse function theorem for analytic functions, we could construct a wide variety of inverses for the exponential map, but we would discover that they are all represented by some germ in S. In that sense, S is the "one true inverse" of the exponential map.

Suppose that a power series has radius of convergence r and defines an analytic function f inside that disc. Consider points on the circle of convergence. A point for which there is a neighbourhood on which f has an analytic extension is regular, otherwise singular. The circle is a natural boundary if all its points are singular.

More generally, we may apply the definition to any open connected domain on which f is analytic, and classify the points of the boundary of the domain as regular or singular: the domain boundary is then a natural boundary if all points are singular, in which case the domain is a domain of holomorphy.

In the above language this means that if G is a simply connected domain, and S is a sheaf whose set of base points contains G, then there exists an analytic function f on G whose germs belong to S.

For a power series

the circle of convergence is a natural boundary. Such a power series is called lacunary. This theorem has been substantially generalized by Eugen Fabry (see Fabry's gap theorem) and George Pólya.

has the convergence disc of f around z0 as a natural boundary.

The proof of this theorem makes use of Hadamard's gap theorem.