Angles may be trisected via a Neusis construction, but this uses tools outside the Greek framework of an unmarked straightedge and a compass.

Angle trisection is a classic problem of compass and straightedge constructions of ancient Greek mathematics. It concerns construction of an angle equal to one third of a given arbitrary angle, using only two tools: an unmarked straightedge, and a compass.

The problem as stated is generally impossible to solve, as shown by Pierre Wantzel (1837). Wantzel's proof relies on ideas from the field of Galois theory—in particular, trisection of an angle corresponds to the solution of a certain cubic equation, which is not possible using the given tools. Note that the fact that there is no way to trisect an angle in general with just a compass and a straightedge does not mean that there is no trisectible angle: for example, it is relatively straightforward to trisect a right angle (that is, to construct an angle of measure 30 degrees).

It is, however, possible to trisect an arbitrary angle by using tools other than straightedge and compass. For example, neusis construction, also known to ancient Greeks, involves simultaneous sliding and rotation of a marked straightedge, which cannot be achieved with the original tools. Other techniques were developed by mathematicians over centuries.

Because it is defined in simple terms, but complex to prove unsolvable, the problem of angle trisection is a frequent subject of pseudomathematical attempts at solution by naive enthusiasts. The "solutions" often involve mistaken interpretations of the rules, or are simply incorrect.[1]

Bisection of arbitrary angles has long been solved.

Using only an unmarked straightedge and a compass, Greek mathematicians found means to divide a line into an arbitrary set of equal segments, to draw parallel lines, to bisect angles, to construct many polygons, and to construct squares of equal or twice the area of a given polygon.

Construct an angle equal to one-third of a given arbitrary angle (or divide it into three equal angles), using only two tools:

Rulers. The displayed ones are marked — an ideal straightedge is un-marked 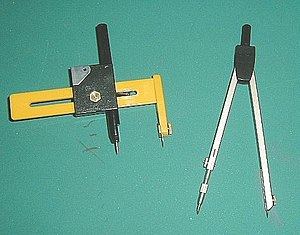 Pierre Wantzel published a proof of the impossibility of trisecting an arbitrary angle in 1837.[2] The problem of constructing an angle of a given measure

because one may pass from one solution to the other by a compass and straightedge construction. It follows that, given a segment that is defined to have unit length, the problem of angle trisection is equivalent to constructing a segment whose length is the root of a cubic polynomial — since by the triple-angle formula,

This allows us to reduce the original geometric problem to a purely algebraic problem.

. Then by the triple-angle formula,

is degree 3, if it is reducible over by Q then it has a rational root. By the rational root theorem, this root must be 1 or −1, but both are clearly not roots. Therefore

is irreducible over by Q, and the minimal polynomial for cos(20°) is of degree 3.

Many people (who presumably are unaware of the above result, misunderstand it, or incorrectly reject it) have proposed methods of trisecting the general angle. Some of these methods provide reasonable approximations; others (some of which are mentioned below) involve tools not permitted in the classical problem. The mathematician Underwood Dudley has detailed some of these failed attempts in his book The Trisectors.[3]

Angles which can be trisected

However, some angles can be trisected. For example, for any constructible angle

. There are angles which are not constructible, but are trisectible. For example,

is such an angle: five copies of

combine to make an angle of measure

, which is a full circle plus the desired

. More generally, for a positive integer

, an angle of measure

is trisectible if and only if

is a prime number, this angle is constructible if and only if

is a Fermat prime.

may be trisected if and only if

is reducible over the field extension Q

The proof is a relatively straightforward generalization of the proof given above that a 60-degree angle is not trisectible.[5]

The general problem of angle trisection is solvable by using additional tools, and thus going outside of the original Greek framework of compass and straightedge.

{{#invoke:main|main}} Trisection, like many constructions impossible by ruler and compass, can easily be accomplished by the more powerful operations of paper folding, or origami. Huzita's axioms (types of folding operations) can construct cubic extensions (cube roots) of given lengths, whereas ruler-and-compass can construct only quadratic extensions (square roots).

With an auxiliary curve

There are certain curves called trisectrices which, if drawn on the plane using other methods, can be used to trisect arbitrary angles.[7]

With a marked ruler

Another means to trisect an arbitrary angle by a "small" step outside the Greek framework is via a ruler with two marks a set distance apart. The next construction is originally due to Archimedes, called a Neusis construction, i.e., that uses tools other than an un-marked straightedge. The diagrams we use show this construction for an acute angle, but it indeed works for any angle up to 180 degrees.

This requires three facts from geometry (at right): 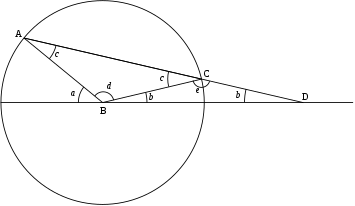 Let l be the horizontal line in the diagram on the right. Angle a (left of point B) is the subject of trisection. First, a point A is drawn at an angle's ray, one unit apart from B. A circle of radius AB is drawn. Then, the markedness of the ruler comes into play: one mark of the ruler is placed at A and the other at B. While keeping the ruler (but not the mark) touching A, the ruler is slid and rotated until one mark is on the circle and the other is on the line l. The mark on the circle is labeled C and the mark on the line is labeled D. This ensures that CD = AB. A radius BC is drawn to make it obvious that line segments AB, BC, and CD all have equal length. Now, Triangles ABC and BCD are isosceles, thus (by Fact 3 above) each has two equal angles.

Hypothesis: Given AD is a straight line, and AB, BC, and CD are all equal length,

, and the theorem is proved.

Again, this construction stepped outside the framework of allowed constructions by using a marked straightedge.

Thomas Hutcheson published an article in the Mathematics Teacher[8] that used a string instead of a compass and straight edge. A string can be used as either a straight edge (by stretching it) or a compass (by fixing one point and identifying another), but can also wrap around a cylinder, the key to Hutcheson's solution.

A tomahawk trisecting an angle. The handle forms one trisector and the blue line shown forms the other.

A "tomahawk" is a geometric shape consisting of a semicircle and two orthogonal line segments, such that the length of the shorter segment is equal to the circle radius. Trisection is executed by leaning the end of the tomahawk's shorter segment on one ray, the circle's edge on the other, so that the "handle" (longer segment) crosses the angle's vertex; the trisection line runs between the vertex and the center of the semicircle.

Note that while a tomahawk is constructible with compass and straightedge, it is not generally possible to construct a tomahawk in any desired position. Thus, the above construction does not contradict the nontrisectibility of angles with ruler and compass alone.

The tomahawk produces the same geometric effect as the paper-folding method: the distance between circle center and the tip of the shorter segment is twice the distance of the radius, which is guaranteed to contact the angle. It is also equivalent to the use of an architects L-Ruler (Carpenter's Square).

An angle can be trisected with a device that is essentially a four-pronged version of a compass, with linkages between the prongs designed to keep the three angles between adjacent prongs equal.[9]

Other means of trisection