An angular mil, also mil, is a unit of angle. The exact definition varies between users, see below. All versions of the angular mil are approximately the same size as a trigonometric milliradian.

The milliradian (circle/6283.185…) was first invented in the mid nineteenth Century by Charles-Marc Dapples (1837–1920), an engineer and professor at the University of Lausanne.[1] Degrees and minutes were the usual units of angular measurement but others were being proposed, with “grads” (circle/400) under various names having considerable popularity in much of northern Europe. However, Imperial Russia used a different approach, dividing a circle into equilateral triangles (60°, circle/6) and hence 600 units to a circle.

Around the time of the start of World War I, France was experimenting with the use of milliemes (circle/6400) for use with artillery sights instead of decigrades (circle/4000). The United Kingdom was also trialing them to replace degrees and minutes. They were adopted by France although decigrades also remained in use throughout World War I. Other nations also used decigrades. The United States, which copied many French artillery practices, adopted mils (circle/6400). Before 2007 the Swedish defence forces used "streck" (circle/6300, streck meaning lines or marks) (together with degrees for some navigation) which is closer to the milliradian but then changed to NATO mils. After the Bolshevik Revolution and the adoption of the metric system of measurement (e.g. artillery replaced “units of base” with meters) the Red Army expanded the 600 unit circle into a 6000 mil one. Hence the Russian mil has nothing to do with milliradians as its origin.

In the 1950s, NATO adopted metric units of measurement for land and general use. Mils, meters, and kilograms became standard, although degrees remained in use for naval and air purposes, reflecting civil practices.

Use of the Mil-dot system is possible because it is concerned with small angles, and at small angles:

This allows a user to dispense with trigonometry and use simple ratios to determine size and distance with acceptable accuracy for rifle and short distance artillery calculations. 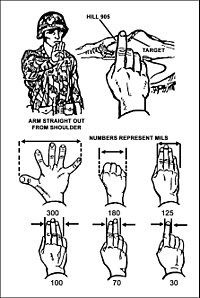 The angular mil is commonly used by military organizations. Its relationship to the trigonometric radian gives rise to the handy property of subtension: One mil approximately subtends one metre at a distance of one thousand metres. More formally the small angle approximation for skinny triangles shows that the angle in radians approximates to the sine of the angle.

When out in the field angle can be measured by using calibrated optics or quite approximately ones fingers and hands. With an outstretched arm one finger is approximately 30 mils wide, a fist 150 mils and a spread hand 300 mils.

Artillery spotters typically use their calibrated binoculars to walk fire onto a target. Here they know the approximate range to the target and so can read off the angle (+ quick calculation) to give the left/right corrections in metres.

Artillery uses angular measurement in gun laying, the azimuth between the gun and its target many kilometres away and the elevation angle of the barrel. This means that artillery uses mils to graduate indirect fire azimuth sights (called dial sights or panoramic telescopes), their associated instruments (directors or aiming circles), their elevation sights (clinometers or quadrants), together with their manual plotting devices, firing tables and fire control computers.

Mildot chart as used by snipers

Many telescopic sights used on rifles have reticles that are marked in angular mils, and these are generally called Mil-dot scopes. The Mil-dots serve two purposes, range estimation and trajectory correction.

With a Mil-dot reticle-equipped scope the distance to an object can be estimated with a fair degree of accuracy by a trained user by determining how many angular mils an object of known size subtends. Once the distance is known, the drop of the bullet at that range (see external ballistics), converted back into angular mils, can be used to adjust the aiming point. Generally Mil-dot scopes have both horizontal and vertical crosshairs marked; the horizontal and vertical marks are used for range estimation and the vertical marks for bullet drop compensation. Trained users, however, can also use the horizontal dots to compensate for bullet drift due to wind. Mil-dot reticle-equipped scopes are most suited for long shots under uncertain conditions, such as those encountered by military and law enforcement snipers, varmint hunters and other field shooters. These riflemen must be able to aim at varying targets at unknown (sometimes long) distances, so accurate compensation for bullet drop is required.

Users of the metric system, (which includes most of the world's military forces by whom this system was developed), can much more easily use a Mil-dot reticle since the mental arithmetic is much simpler. It is always decimal.

To determine the distance or range to a target of known size at an unknown distance this formula can be applied:

This is otherwise simplified as:

When used with some riflescopes of variable objective magnification and fixed reticle magnification (where the reticle is in the second focal plane), this can be modified to:

(However, a user should verify this with their individual scope since some are not calibrated at 10x.)

Knowing these relationships, you can set up a target range by drawing a vertical or horizontal line onto our target that is 3.6 inches long then backing up until the line is exactly one mil long in your scope for a 100 yard range, 7.2 inches for 200 yards, 10.8 inches for 300 yards, etc.

Definitions of the angular mil