This article refers to the animal. For the Indonesian-made military vehicle, see Anoa (armoured personnel carrier).

Anoa, also known as midget buffalo and sapiutan, are a subgenus of Bubalus comprising two species native to Indonesia: the mountain anoa (Bubalus quarlesi) and the lowland anoa (Bubalus depressicornis). Both live in undisturbed rainforest, and are essentially miniature water buffalo. They are similar in appearance to a deer, weighing Template:Convert.

Both are found on the island of Sulawesi and the nearby island of Buton in Indonesia. They apparently live singly or in pairs, rather than in herds like most cattle, except when the cows are about to give birth. One young is born per year.

Both species of anoa have been classified as endangered since the 1960s, and the population continues to decrease. Fewer than 5000 animals of each species likely remain. Reasons for their decline include hunting for hide, horns and meat by the local peoples and loss of habitat due to the advancement of settlement. Currently, hunting is the more serious factor in most areas. 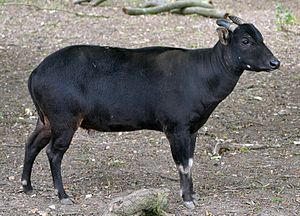 The lowland anoa (Bubalus depressicornis) is a small bovid, standing barely over Template:Convert at the shoulder. They are also known as anoa de Ilanura or anoa des plaines. It is most closely allied to the larger Asiatic buffaloes, showing the same reversal of the direction of the hair on their backs. The horns are peculiar for their upright direction and comparative straightness, although they have the same triangular section as in other buffaloes. White spots are sometimes present below the eyes, and there may be white markings on the legs and back; the absence or presence of these white markings may be indicative of distinct races. The horns of the cows are very small. The nearest allies of the anoa appear to be certain extinct buffaloes, the remains of which are found in the Siwalik Hills of northern India. In habits, the animal appears to resemble the Indian buffalo. It is usually solitary, living in lowland forests and wetlands, browsing on plants and understory.

Mountain anoa (Bubalus quarlesi) are also known as anoa de montana, anoa de Quarle, anoa des montagnes, anoa pegunungan, and Quarle's anoa. Standing at Template:Convert at the shoulder, it is even smaller than the lowland anoa and the smallest of all wild cattle. They also have longer, woolier hair that moults every February to April, showing faint spots on the head, neck and limbs.[1]