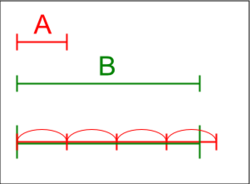 Illustration of the Archimedean property.

In abstract algebra and analysis, the Archimedean property, named after the ancient Greek mathematician Archimedes of Syracuse, is a property held by some algebraic structures, such as ordered or normed groups, and fields. Roughly speaking, it is the property of having no infinitely large or infinitely small elements. It was Otto Stolz who gave the axiom of Archimedes its name because it appears as Axiom V of Archimedes’ On the Sphere and Cylinder.[1]

The notion arose from the theory of magnitudes of Ancient Greece; it still plays an important role in modern mathematics such as David Hilbert's axioms for geometry, and the theories of ordered groups, ordered fields, and local fields.

This can be made precise in various contexts with slightly different ways of formulation. For example, in the context of ordered fields, one has the axiom of Archimedes which formulates this property, where the field of real numbers is Archimedean, but that of rational functions in real coefficients is not.

History and origin of the name of the Archimedean property

The concept is named after the ancient Greek geometer and physicist Archimedes of Syracuse.

The Archimedean property appears in Book V of Euclid's Elements as Definition 4:

Magnitudes are said to have a ratio to one another which can, when multiplied, exceed one another.

Because Archimedes credited it to Eudoxus of Cnidus it is also known as the "Theorem of Eudoxus"[2] or the Eudoxus axiom.

Archimedes used infinitesimals in heuristic arguments, although he denied that those were finished mathematical proofs.

Let x and y be positive elements of a linearly ordered group G. Then x is infinitesimal with respect to y (or equivalently, y is infinite with respect to x) if, for every natural number n, the multiple nx is less than y, that is, the following inequality holds:

The group G is Archimedean if there is no pair x,y such that x is infinitesimal with respect to y.

An ordered field has some additional nice properties.

In this setting, an ordered field K is Archimedean precisely when the following statement, called the axiom of Archimedes, holds:

Let x be any element of K. Then there exists a natural number n such that n > x.

Alternatively one can use the following characterization:

For any positive ε in K, there exists a natural number n, such that 1/n < ε.

. Then, F is said to be Archimedean if for any non-zero

there exists a natural number n such that

Similarly, a normed space is Archimedean if a sum of

, has norm greater than one for sufficiently large

. A field with an absolute value or a normed space is either Archimedean or satisfies the stronger condition, referred to as the ultrametric triangle inequality,

The concept of a non-Archimedean normed linear space was introduced by A. F. Monna.[3]

Archimedean property of the real numbers

The field of the rational numbers can be assigned one of a number of absolute value functions, including the trivial function

One should note that the Archimedean property of real numbers holds also in constructive analysis, even though the least upper bound property may fail in that context.

{{#invoke:main|main}} For an example of an ordered field that is not Archimedean, take the field of rational functions with real coefficients. (A rational function is any function that can be expressed as one polynomial divided by another polynomial; we will assume in what follows that this has been done in such a way that the leading coefficient of the denominator is positive.) To make this an ordered field, one must assign an ordering compatible with the addition and multiplication operations. Now f > g if and only if f − g > 0, so we only have to say which rational functions are considered positive. Call the function positive if the leading coefficient of the numerator is positive. (One must check that this ordering is well defined and compatible with addition and multiplication.) By this definition, the rational function 1/x is positive but less than the rational function 1. In fact, if n is any natural number, then n(1/x) = n/x is positive but still less than 1, no matter how big n is. Therefore, 1/x is an infinitesimal in this field.

4. For any x in K the set of integers greater than x has a least element. (If x were a negative infinite quantity every integer would be greater than it.)

6. The rationals are dense in K with respect to both sup and inf. (That is, every element of K is the sup of some set of rationals, and the inf of some other set of rationals.) Thus an Archimedean field is any dense ordered extension of the rationals, in the sense of any ordered field that densely embeds its rational elements.