Template:Distinguish Template:Standard model of particle physics A baryon is a composite subatomic particle made up of three quarks (as distinct from mesons, which are composed of one quark and one antiquark). Baryons and mesons belong to the hadron family of particles, which are the quark-based particles. The name "baryon" comes from the Greek word for "heavy" (βαρύς, barys), because, at the time of their naming, most known elementary particles had lower masses than the baryons.

As quark-based particles, baryons participate in the strong interaction, whereas leptons, which are not quark-based, do not. The most familiar baryons are the protons and neutrons that make up most of the mass of the visible matter in the universe. Electrons (the other major component of the atom) are leptons.

Until recently, it was believed that some experiments showed the existence of pentaquarks — "exotic" baryons made of four quarks and one antiquark.[1][2] The particle physics community as a whole did not view their existence as likely in 2006,[3] and in 2008, considered evidence to be overwhelmingly against the existence of the reported pentaquarks.[4]

Baryons are strongly interacting fermions — that is, they experience the strong nuclear force and are described by Fermi−Dirac statistics, which apply to all particles obeying the Pauli exclusion principle. This is in contrast to the bosons, which do not obey the exclusion principle.

Nearly all matter that may be encountered or experienced in everyday life is baryonic matter, which includes atoms of any sort, and provides those with the quality of mass. Non-baryonic matter, as implied by the name, is any sort of matter that is not composed primarily of baryons. Those might include neutrinos or free electrons dark matter, such as supersymmetric particles, axions, or black holes.

The very existence of baryons is also a significant issue in cosmology because it is assumed that the Big Bang produced a state with equal amounts of baryons and antibaryons. The process by which baryons came to outnumber their antiparticles is called baryogenesis.

Experiments are consistent with the number of quarks in the universe being a constant and, to be more specific, the number of baryons being a constant {{ safesubst:#invoke:Unsubst||date=__DATE__ |$B= {{#invoke:Category handler|main}}{{#invoke:Category handler|main}}[citation needed] }}; in technical language, the total baryon number appears to be conserved. Within the prevailing Standard Model of particle physics, the number of baryons may change in multiples of three due to the action of sphalerons, although this is rare and has not been observed under experiment. Some grand unified theories of particle physics also predict that a single proton can decay, changing the baryon number by one; however, this has not yet been observed under experiment. The excess of baryons over antibaryons in the present universe is thought to be due to non-conservation of baryon number in the very early universe, though this is not well understood. 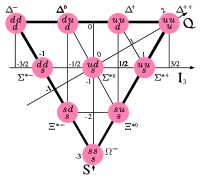 Combinations of three u, d or s quarks forming baryons with a spin-Template:Frac form the uds baryon decuplet 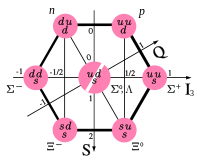 Combinations of three u, d or s quarks forming baryons with a spin-Template:Frac form the uds baryon octet

The concept of isospin was first proposed by Werner Heisenberg in 1932 to explain the similarities between protons and neutrons under the strong interaction.[5] Although they had different electric charges, their masses were so similar that physicists believed they were actually the same particle. The different electric charges were explained as being the result of some unknown excitation similar to spin. This unknown excitation was later dubbed isospin by Eugene Wigner in 1937.[6]

where the n's are the number of up and down quarks and antiquarks.

In the "isospin picture", the four Deltas and the two nucleons were thought to be the different states of two particles. However in the quark model, Deltas are different states of nucleons (the N++ or N− are forbidden by Pauli's exclusion principle). Isospin, although conveying an inaccurate picture of things, is still used to classify baryons, leading to unnatural and often confusing nomenclature.

The strangeness flavour quantum number S (not to be confused with spin) was noticed to go up and down along with particle mass. The higher the mass, the lower the strangeness (the more s quarks). Particles could be described with isospin projections (related to charge) and strangeness (mass) (see the uds octet and decuplet figures on the right). As other quarks were discovered, new quantum numbers were made to have similar description of udc and udb octets and decuplets. Since only the u and d mass are similar, this description of particle mass and charge in terms of isospin and flavour quantum numbers works well only for octet and decuplet made of one u, one d, and one other quark, and breaks down for the other octets and decuplets (for example, ucb octet and decuplet). If the quarks all had the same mass, their behaviour would be called symmetric, as they would all behave in exactly the same way with respect to the strong interaction. Since quarks do not have the same mass, they do not interact in the same way (exactly like an electron placed in an electric field will accelerate more than a proton placed in the same field because of its lighter mass), and the symmetry is said to be broken.

It was noted that charge (Q) was related to the isospin projection (I3), the baryon number (B) and flavour quantum numbers (S, C, B′, T) by the Gell-Mann–Nishijima formula:[8]

where S, C, B′, and T represent the strangeness, charm, bottomness and topness flavour quantum numbers, respectively. They are related to the number of strange, charm, bottom, and top quarks and antiquark according to the relations:

meaning that the Gell-Mann–Nishijima formula is equivalent to the expression of charge in terms of quark content:

{{#invoke:main|main}} Spin (quantum number S) is a vector quantity that represents the "intrinsic" angular momentum of a particle. It comes in increments of Template:Frac ħ (pronounced "h-bar"). The ħ is often dropped because it is the "fundamental" unit of spin, and it is implied that "spin 1" means "spin 1 ħ". In some systems of natural units, ħ is chosen to be 1, and therefore does not appear anywhere.

If the universe were reflected in a mirror, most of the laws of physics would be identical — things would behave the same way regardless of what we call "left" and what we call "right". This concept of mirror reflection is called intrinsic parity or parity (P). Gravity, the electromagnetic force, and the strong interaction all behave in the same way regardless of whether or not the universe is reflected in a mirror, and thus are said to conserve parity (P-symmetry). However, the weak interaction does distinguish "left" from "right", a phenomenon called parity violation (P-violation).

Based on this, one might think that, if the wavefunction for each particle (in more precise terms, the quantum field for each particle type) were simultaneously mirror-reversed, then the new set of wavefunctions would perfectly satisfy the laws of physics (apart from the weak interaction). It turns out that this is not quite true: In order for the equations to be satisfied, the wavefunctions of certain types of particles have to be multiplied by −1, in addition to being mirror-reversed. Such particle types are said to have negative or odd parity (P = −1, or alternatively P = –), while the other particles are said to have positive or even parity (P = +1, or alternatively P = +).

For baryons, the parity is related to the orbital angular momentum by the relation:[12]

As a consequence, baryons with no orbital angular momentum (L = 0) all have even parity (P = +).

It is also a widespread (but not universal) practice to follow some additional rules when distinguishing between some states that would otherwise have the same symbol.[8]