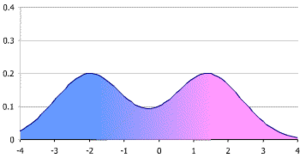 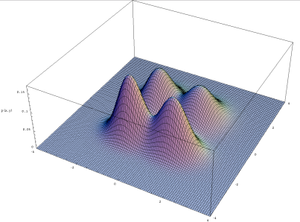 In statistics, a bimodal distribution is a continuous probability distribution with two different modes. These appear as distinct peaks (local maxima) in the probability density function, as shown in Figure 1.

More generally, a multimodal distribution is a continuous probability distribution with two or more modes, as illustrated in Figure 3.

This classification has since been modified slightly:

Under this classification bimodal distributions are classified as type S or U.

Bimodal distributions occur both in mathematics and in the natural sciences.

where a and b are constant and x and y are distributed as normal variables with a mean of 0 and a standard deviation of 1. R has a known density that can be expressed as a confluent hypergeometric function.[3]

Examples of variables with bimodal distributions include the time between eruptions of certain geysers, the color of galaxies, the size of worker weaver ants, the age of incidence of Hodgkin's lymphoma, the speed of inactivation of the drug isoniazid in US adults, the absolute magnitude of novae, and the circadian activity patterns of those crepuscular animals that are active both in morning and evening twilight. In fishery science multimodal length distributions reflect the different year classes and can thus be used for age distribution- and growth estimates of the fish population[4] Sediments are usually distributed in a bimodal fashion.

where Y and Z are unimodal random variables and

is a mixture coefficient.

Mixtures with two distinct components need not be bimodal and two component mixtures of unimodal component densities can have more than two modes. There is no immediate connection between the number of components in a mixture and the number of modes of the resulting density.

In biology four factors are known to contribute to bimodal distributions of population sizes:

The distribution of fitness effects of mutations for both whole genomes[5][6] and individual genes[7] is also frequently found to be bimodal with most mutations being either neutral or lethal with relatively few having intermediate effect.

where gi is a probability distribution and p is the mixing parameter.

and Si and Ki are the skewness and kurtosis of the ith distribution.

It is not uncommon to encounter situations where an investigator believes that the data comes from a mixture of two normal distributions. Because of this, this mixture has been studied in some detail.[11]

A mixture of two normal distributions has five parameters to estimate: the two means, the two variances and the mixing parameter. A mixture of two normal distributions with equal standard deviations is bimodal only if their means differ by at least twice the common standard deviation.[8] Estimates of the parameters is simplified if the variances can be assumed to be equal (the homoscedastic case).

A mixture of two approximately equal mass normal distributions have a negative kurtosis since the two modes on either side of the center of mass effectively flatten out the distribution.

Mixtures of other distributions require additional parameters to be estimated.

where p is the mixing parameter and d is

where μ1 and μ2 are the means of the two normal distributions and σ1 and σ2 are their standard deviations.

Although several have been suggested, there is no presently generally agreed summary statistic (or set of statistics) to quantify the parameters of a general bimodal distribution. For a mixture of two normal distributions the mean and standard deviation along with the mixing parameter (a weighing system for the combination) are usually used - a total of five parameters.

A statistic that may be useful is Ashman's D:[15]

where μ1, μ2 are the means and σ1 σ2 are the standard deviations.

The bimodality index assumes that the distribution is a sum of two normal distributions with equal variances but differing means.[16] It is defined as follow:

where μ1, μ2 are the means and σ is the common standard deviation.

where p is the mixing parameter.

This index assumes that the distribution is a mixture of two normal distributions with means (μ1 and μ2) and standard deviations (σ1 and σ2):[17]

Sarle's bimodality coefficient b is[18]

where γ is the skewness and κ is the kurtosis. The kurtosis is here defined to be the standardised fourth moment around the mean. The value of b lies between 0 and 1.[19] The logic behind this coefficient is that a bimodal distribution will have very low kurtosis, an asymmetric character, or both - all of which increase this coefficient.

The formula for a finite sample is[20]

The value of b for the uniform distribution is 5/9. This is also its value for the exponential distribution. Values greater than 5/9 may indicate a bimodal or multimodal distribution. The maximum value (1.0) is reached only by a Bernoulli distribution with only two distinct values or the sum of two different Dirac delta functions.

The distribution of this statistic is unknown. It is related to a statistic proposed earlier by Pearson - the difference between the kurtosis and the square of the skewness (vide infra).

This is the ratio of the left and right peaks.[17] Mathematically

where Al and Ar are the amplitudes of the left and right peaks respectively.

where Al and Ar are the amplitudes of the left and right peaks respectively and Pi is the logarithm taken to the base 2 of the proportion of the distribution in the ith interval. The maximal value of B is 1.

A number of tests are available to determine if a data set is distributed in a bimodal (or multimodal) fashion.

In the study of sediments particle size is frequently bimodal. Empirically it has been found useful to plot the frequency against the log( size ) of the particles.[22][23] This usually gives a clear separation of the particles into a bimodal distribution. In geological applications the logarithm is normally taken to the base 2. The log transformed values are referred to as phi (Φ) units. This system is known as the Krumbein (or phi) scale.

An alternative method is to plot the log of the particle size against the cumulative frequency. This graph will usually consist two reasonably straight lines with a connecting line corresponding to the antimode.

Approximate values for several statistics can be derived from the graphic plots.[22]

where Mean is the mean, StdDev is the standard deviation, Skew is the skewness, Kurt is the kurtosis and φx is the value of the variate φ at the xth percentage of the distribution.

A necessary but not sufficient condition for a symmetrical distribution to be bimodal is that the kurtosis be less than three.[24][25] Here the kurtosis is defined to be the standardised fourth moment around the mean. The reference given prefers to use the excess kurtosis - the kurtosis less 3.

Pearson in 1894 was the first to devise a procedure to test whether a distribution could be resolved into two normal distributions.[26] This method required the solution of a ninth order polynomial. In a subsequent paper Pearson reported that for any distribution skewness2 + 1 < kurtosis.[19] Later Pearson showed that[27]

where b2 is the kurtosis and b1 is the square of the skewness. Equality holds only for the two point Bernoulli distribution or the sum of two different Dirac delta functions. These are the most extreme cases of bimodality possible. The kurtosis in both these cases is 1. Since they are both symmetrical their skewness is 0 and the difference is 1.

Baker proposed a transformation to convert a bimodal to a unimodal distribution.[28]

A method based on the score and Wald tests has been proposed.[34] This method can distinguish between unimodal and bimodal distributions when the underlying distributions are known.

Statistical tests for the antimode are known.[35]

Otsu's method is commonly employed in computer graphics to determine the optimal separation between two distributions.

The dip test is available for use in R.[1] The values for the dip statistic values range between 0 to 1. Values less than 0.05 indicating significant bimodality and values greater than 0.05 but less than 0.10 suggesting bimodality with marginal significance.

Silverman introduced a bootstrap method for the number of modes.[36] The test uses a fixed bandwidth which reduces the power of the test and its interpretability. Under smoothed densities may have an excessive number of modes whose count during bootstrapping is unstable.

Additional tests are available for a number of special cases

This distribution is bimodal for certain values of is parameters. A test for these values has been described.[45]

Assuming that the distribution is known to be bimodal or has been shown to be bimodal by one or more of the tests above, it is frequently desirable to fit a curve to the data. This may be difficult.

Bayesian methods may be useful in difficult cases.

Assuming that the distribution is a mixture of two normal distributions then the expectation-maximization algorithm may be used to determine the parameters. Several programmes are available for this including Cluster.[46]

The mixtools package also available for R can test for and estimate the parameters of a number of different distributions.[47]

Another package for a mixture of two right tailed gamma distributions is available.[48]

Several other packages for R are available to fit mixture models: these include flexmix,[49] mcclust,[50] mixdist[51]

The programme SWRC ﬁt can fit a number of bimodal distributions.[3]

The statistical programme SAS can also fit a variety of mixed distributions with the command PROCFREQ.