Bremsstrahlung (Template:IPA-de, from bremsen{{#invoke:Category handler|main}} "to brake" and Strahlung{{#invoke:Category handler|main}} "radiation", i.e. "braking radiation" or "deceleration radiation") is electromagnetic radiation produced by the deceleration of a charged particle when deflected by another charged particle, typically an electron by an atomic nucleus. The moving particle loses kinetic energy, which is converted into a photon, thus satisfying the law of conservation of energy. The term is also used to refer to the process of producing the radiation. Bremsstrahlung has a continuous spectrum, which becomes more intense and whose peak intensity shifts toward higher frequencies as the change of the energy of the accelerated particles increases.

Strictly speaking, braking radiation is any radiation due to the acceleration of a charged particle, which includes synchrotron radiation, cyclotron radiation, and the emission of electrons and positrons during beta decay. However, the term is frequently used in the more narrow sense of radiation from electrons (from whatever source) slowing in matter.

Bremsstrahlung emitted from plasma is sometimes referred to as free-free radiation. This refers to the fact that the radiation in this case is created by charged particles that are freeTemplate:Clarify both before and after the deflection (acceleration) that caused the emission.

{{#invoke:main|main}} A charged particle accelerating in a vacuum radiates power, as described by the Larmor formula and its relativistic generalizations. Although the term "bremsstrahlung" is usually reserved for charged particles accelerating in matter, not vacuum, the formulas are similar.{{ safesubst:#invoke:Unsubst||date=__DATE__ |$B= {{#invoke:Category handler|main}}{{#invoke:Category handler|main}}[citation needed] }} (In this respect, bremsstrahlung differs from Cherenkov radiation, another kind of braking radiation which occurs only in matter, and not in a vacuum.)

(the velocity of the particle divided by the speed of light),

is the Lorentz factor,

signifies a time derivative of

, and q is the charge of the particle. This is commonly written in the mathematically equivalent form:[2]

In the case where velocity is parallel to acceleration (for example, linear motion), the formula simplifies to[3]

) (a case that arises in circular particle accelerators known as synchrotrons), the total power radiated reduces to

, we see that the total radiated power goes as

, which accounts for why electrons lose energy to bremsstrahlung radiation much more rapidly than heavier charged particles (e.g., muons, protons, alpha particles). This is the reason a TeV energy electron-positron collider (such as the proposed International Linear Collider) cannot use a circular tunnel (requiring constant acceleration), while a proton-proton collider (such as the Large Hadron Collider) can utilize a circular tunnel. The electrons lose energy due to bremsstrahlung at a rate

times higher than protons do.

The most general formula for radiated power as a function of angle is:[2]

is a unit vector pointing from the particle towards the observer, and

is an infinitesimal bit of solid angle.

In the case where velocity is parallel to acceleration (for example, linear motion), this simplifies to[2]

is the angle between

and the direction of observation.

, and is also suppressed near

. This plot is for the quantum case

In a plasma, the free electrons continually collide with the ions, producing bremsstrahlung. A complete analysis requires accounting for both binary Coulomb collisions as well as collective (dielectric) behavior. A detailed treatment is given by Bekefi,[4] while a simplified one is given by Ichimaru.[5] In this section we follow Bekefi's dielectric treatment, with collisions included approximately via the cutoff wavenumber

Consider a uniform plasma, with thermal electrons distributed according to the Maxwell–Boltzmann distribution with the temperature

sr of solid angle, and in both polarizations) of the bremsstrahlung radiated, is calculated to be

is the electron plasma frequency,

is the number density of electrons and ions,

is the classical radius of electron,

is the Boltzmann constant, and

is the speed of light. The first bracketed factor is the index of refraction of a light wave in a plasma, and shows that emission is greatly suppressed for

(this is the cutoff condition for a light wave in a plasma; in this case the light wave is evanescent). This formula thus only applies for

is defined in the exponential integral article, and the unitless quantity

is a maximum or cutoff wavenumber, arising due to binary collisions, and can vary with ion species. Roughly,

(typical in plasmas that are not too cold), where

eV is the Hartree energy, and

is the classical Coulomb distance of closest approach.

For the usual case

is approximate, in that it neglects enhanced emission occurring for

, we can approximate E1 as

is the Euler–Mascheroni constant. The leading, logarithmic term is frequently used, and resembles the Coulomb logarithm that occurs in other collisional plasma calculations. For

the log term is negative, and the approximation is clearly inadequate. Bekefi gives corrected expressions for the logarithmic term that match detailed binary-collision calculations.

The total emission power density, integrated over all frequencies, is

; it is always positive. For

The first bracketed factor has units of 1/volume, while the second has units of power. Note the appearance of the fine-structure constant

due to the quantum nature of

. In practical units, a commonly used version of this formula for

This formula is 1.59 times the one given above, with the difference due to details of binary collisions. Such ambiguity is often expressed by introducing Gaunt factor

where everything is expressed in the CGS units.

Relativistic corrections to the emission of a 30-keV photon by an electron impacting on a proton.

For very high temperatures there are relativistic corrections to this formula, that is, additional terms of the order of 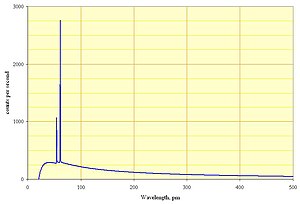 Spectrum of the X-rays emitted by an X-ray tube with a rhodium target, operated at 60 kV. The continuous curve is due to bremsstrahlung, and the spikes are characteristic K lines for rhodium. The curve goes to zero at 21 pm in agreement with the Duane–Hunt law, as described in the text.

{{#invoke:main|main}} In an X-ray tube, electrons are accelerated in a vacuum by an electric field and shot into a piece of metal called the "target". X-rays are emitted as the electrons slow down (decelerate) in the metal. The output spectrum consists of a continuous spectrum of X-rays, with additional sharp peaks at certain energies (see graph on right). The continuous spectrum is due to bremsstrahlung, while the sharp peaks are characteristic X-rays associated with the atoms in the target. For this reason, bremsstrahlung in this context is also called continuous X-rays.[16]

The shape of this continuum spectrum is approximately described by Kramers' law.

The spectrum has a sharp cutoff at low wavelength, which is due to the limited energy of the incoming electrons. For example, if an electron in the tube is accelerated through 60 kV, then it will acquire a kinetic energy of 60 keV, and when it strikes the target it can create X-rays with energy of at most 60 keV, by conservation of energy. (This upper limit corresponds to the electron coming to a stop by emitting just one X-ray photon. Usually the electron emits many photons, and each has an energy less than 60 keV.) A photon with energy of at most 60 keV has wavelength of at least 21 pm, so the continuous X-ray spectrum has exactly that cutoff, as seen in the graph. More generally the formula for the low-wavelength cutoff is:[17]

where h is Planck's constant, c is the speed of light, V is the voltage that the electrons are accelerated through, e is the elementary charge, and pm is picometres. This is called the Duane–Hunt law.

The "inner" bremsstrahlung (also known as "internal bremsstrahlung") arises from the creation of the electron and its loss of energy (due to the strong electric field in the region of the nucleus undergoing decay) as it leaves the nucleus. Such radiation is a feature of beta decay in nuclei, but it is occasionally (less commonly) seen in the beta decay of free neutrons to protons, where it is created as the beta electron leaves the proton.

In electron and positron emission by beta decay the photon's energy comes from the electron-nucleon pair, with the spectrum of the bremsstrahlung decreasing continuously with increasing energy of the beta particle. In electron capture, the energy comes at the expense of the neutrino, and the spectrum is greatest at about one third of the normal neutrino energy, decreasing to zero electromagnetic energy at normal neutrino energy. Note that in the case of electron capture, bremsstrahlung is emitted even though no charged particle is emitted. Instead, the bremsstrahlung radiation may be thought of as being created as the captured electron is accelerated toward being absorbed. Such radiation may be at frequencies that are the same as soft gamma radiation, but it exhibits none of the sharp spectral lines of gamma decay, and thus is not technically gamma radiation.

The internal process is to be contrasted with the "outer" bremsstrahlung due to the impingement on the nucleus of electrons coming from the outside (i.e., emitted by another nucleus), as discussed above.[18]

In some cases, e.g. Template:Chem, the bremsstrahlung produced by shielding the beta radiation with the normally used dense materials (e.g. lead) is itself dangerous; in such cases, shielding must be accomplished with low density materials, e.g. Plexiglass (lucite), plastic, wood, or water;[19] as the atomic number is lower for these materials, the intensity of bremsstrahlung is significantly reduced but a larger thickness of shielding is required to stop the electrons (beta radiation).

The dominant luminous component in a cluster of galaxies is the 107 to 108 kelvin intracluster medium. The emission from the intracluster medium is characterized by thermal bremsstrahlung. This radiation is in the energy range of X-rays and can be easily observed with space-based telescopes such as Chandra X-ray Observatory, XMM-Newton, ROSAT, ASCA, EXOSAT, Suzaku, RHESSI and future missions like IXO [2] and Astro-H [3].

The complete quantum mechanical description was first performed by Bethe and Heitler.[20] They assumed plane waves for electrons which scatter at the nucleus of an atom, and derived a cross section which relates the complete geometry of that process to the frequency of the emitted photon. The quadruply differential cross section which shows a quantum mechanical symmetry to pair production, is:

is the atomic number,

the reduced Planck's constant and

the speed of light. The kinetic energy

is the mass of an electron. Conservation of energy gives

is the photon energy. The directions of the emitted photon and the scattered electron are given by

is the momentum of the photon.

The differentials are given as

The range of validity is given by the Born approximation

where this relation has to be fulfilled for the velocity

of the electron in the initial and final state.

For practical applications (e.g. in Monte Carlo codes) it can be interesting to focus on the relation between the frequency

of the emitted photon and the angle between this photon and the incident electron. Köhn and Ebert [21] integrated the quadruply differential cross section by Bethe and Heitler over

An analysis of the doubly differential cross section above shows that electrons whose kinetic energy is larger than the rest energy (511 keV) emit photons in forward direction while electrons with a small energy emit photons isotropically.

One mechanism which is important for small atomic numbers

, is the scattering of a free electron at the shell electrons of an atom or molecule.[24] Since electron-electron bremsstrahlung is a function of

and the usual electron-nucleus bremsstrahlung is a function of

, electron-electron bremsstrahlung is negligible for metals. For air, however, it plays an important role in the production of terrestrial gamma-ray flashes.[25]