An illustration of a bump function in two variables.

In mathematics, a bump function is a function f : Rn → R on a Euclidean space Rn which is both smooth (in the sense of having continuous derivatives of all orders) and compactly supported. The space of all bump functions on Rn is denoted

. The dual space of this space endowed with a suitable topology is the space of distributions.

is an example of a bump function in one dimension. It is clear from the construction that this function has compact support, since a function of the real line has compact support if and only if it has bounded support. The proof of smoothness follows along the same lines as for the related function discussed in the Non-analytic smooth function article. This function can be interpreted as the Gaussian function

scaled to fit into the unit disc: the substitution 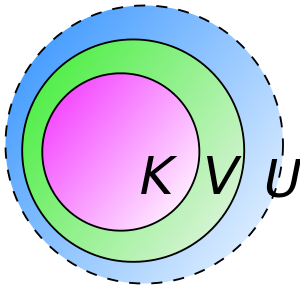 An illustration of the sets in the construction.

It is possible to construct bump functions "to specifications". Stated formally, if K is an arbitrary compact set in n dimensions and U is an open set containing K, there exists a bump function φ which is 1 on K and 0 outside of U. Since U can be taken to be a very small neighborhood of K, this amounts to being able to construct a function that is 1 on K and falls off rapidly to 0 outside of K, while still being smooth.

The construction proceeds as follows. One considers a compact neighborhood V of K contained in U, so K ⊂ Vo ⊂ V ⊂ U. The characteristic function

a bit, by taking the convolution of

from the previous section and performing appropriate scalings.

While bump functions are smooth, they cannot be analytic unless they vanish identically. This is a simple consequence of the identity theorem.

Bump functions are often used as mollifiers, as smooth cutoff functions, and to form smooth partitions of unity. They are the most common class of test functions used in analysis.

from above can be analyzed by a saddle-point method, and decays asymptotically as