is a real number, is a specific type of metric space. Intuitively, triangles in a

space, the curvature is bounded from above by

. A notable special case is

spaces are known as Hadamard spaces after the French mathematician Jacques Hadamard.

was coined by Mikhail Gromov in 1987 and is an acronym for Élie Cartan, Aleksandr Danilovich Aleksandrov and Victor Andreevich Toponogov (although Toponogov never explored curvature bounded above in publications). 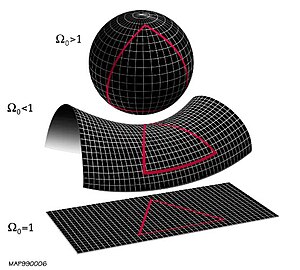 For a real number

can be joined by a geodesic segment, an arc length parametrized continuous curve

be a triangle in

with geodesic segments as its sides.

is said to satisfy the

inequality if there is a comparison triangle

in the model space

, with sides of the same length as the sides of

, such that distances between points on

is said to be a

space if every geodesic triangle

with perimeter less than

is said to be a space with curvature

if every point of

has a geodesically convex

neighbourhood. A space with curvature

may be said to have non-positive curvature.

equipped with the induced length metric is not a

As a special case, a complete CAT(0) space is also known as a Hadamard space; this is by analogy with the situation for Hadamard manifolds. A Hadamard space is contractible (it has the homotopy type of a single point) and, between any two points of a Hadamard space, there is a unique geodesic segment connecting them (in fact, both properties also hold for general, possibly incomplete, CAT(0) spaces). Most importantly, distance functions in Hadamard spaces are convex: if σ1, σ2 are two geodesics in X defined on the same interval of time I, then the function I → R given by

is convex in t.

space. Then the following properties hold: