Caesium chloride or cesium chloride, is the inorganic compound with the formula CsCl. This colorless solid is an important source of caesium ions in a variety of applications. Its crystal structure forms a major structural type where each caesium ion is coordinated by 8 chlorine ions. Caesium chloride crystals are thermally stable, but easily dissolve in water and concentrated hydrochloric acid, and therefore gradually disintegrate in the ambient conditions due to moisture. Caesium chloride occurs naturally in mineral waters and as an impurity in carnallite (up to 0.002%), sylvite and kainite. Less than 20 tonnes of CsCl is produced annually worldwide, mostly from a caesium-bearing mineral pollucite.[1]

Caesium chloride is widely used in isopycnic centrifugation for separating various types of DNA. It is a reagent in analytical chemistry, where it is used to identify ions by the color and morphology of the precipitate. When enriched in radioisotopes, such as 137CsCl or 131CsCl, caesium chloride is used in nuclear medicine applications such as treatment of cancer and diagnosis of myocardial infarction. Another form of cancer treatment was studied using conventional non-radioactive CsCl. Whereas conventional caesium chloride has a rather low toxicity to humans and animals, the radioactive form easily contaminates the environment due to the high solubility of CsCl in water. Spread of 137CsCl powder from a 93-gram container in 1987 in Goiânia, Brazil, resulted in one of the worst-ever radiation spill accidents killing four and directly affecting more than 100,000 people. 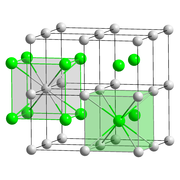 The caesium chloride structure adopts a primitive cubic lattice with a two-atom basis, where both atoms have eightfold coordination. The chloride atoms lie upon the lattice points at the edges of the cube, while the caesium atoms lie in the holes in the center of the cubes. This structure is shared with CsBr and CsI and many binary metallic alloys. In contrast, the other alkaline halides have the sodium chloride (rocksalt) structure.[2] When both ions are similar in size (Cs+ ionic radius 174 pm for this coordination number, Cl− 181 pm) the CsCl structure is adopted, when they are different (Na+ ionic radius 102 pm, Cl− 181 pm) the sodium chloride structure is adopted. Upon heating to above 450 °C, the normal caesium chloride structure (α-CsCl) converts to the β-CsCl form with the rocksalt structure (space group FmTemplate:Overlinem).[3][4]

Caesium chloride is colorless in the form of large crystals and white when powdered. It readily dissolves in water with the maximum solubility increasing from 1865 g/L at 20 °C to 2705 g/L at 100 °C.[5][6] The crystals are very hygroscopic and gradually disintegrate at ambient conditions.[7] Caesium chloride does not form hydrates.[8]

Despite its wide band gap of about 8.35 eV at 80 K,[15] caesium chloride weakly conducts electricity, and the conductivity is not electronic but ionic. The conductivity has a value of the order 10−7 S/cm at 300 °C. It occurs through nearest-neighbor jumps of lattice vacancies, and the mobility is much higher for the Cl- than Cs+ vacancies. The conductivity increases with temperature up to about 450 °C, with an activation energy changing from 0.6 to 1.3 eV at about 260 °C. It then sharply drops by two orders of magnitude because of the phase transition from the α-CsCl to β-CsCl phase. The conductivity is also suppressed by application of pressure (about 10 times decrease at 0.4 GPa) which reduces the mobility of lattice vacancies.[4]

Caesium chloride completely dissociates upon dissolution in water, and the Cs+ cations are solvated in dilute solution. CsCl converts to caesium sulfate upon being heated in concentrated sulfuric acid or heated with caesium hydrogen sulfate at 550–700 °С:[18]

In laboratory, CsCl can be obtained by treating caesium hydroxide, carbonate, caesium bicarbonate, or caesium sulfide with hydrochloric acid:

Caesium chloride occurs naturally as an impurity in the halide minerals carnallite (KMgCl3·6H2O with up to 0.002% CsCl),[22] sylvite (KCl) and kainite (MgSO4·KCl·3H2O),[23] and in mineral waters. For example, the water of Bad Dürkheim spa, which was used in isolation of caesium, contained about 0.17 mg/L of CsCl.[24] None of these minerals are commercially important.

On industrial scale, CsCl is produced from the mineral pollucite, which is powdered and treated with hydrochloric acid at elevated temperature. The extract is treated with antimony chloride, iodine monochloride, or cerium(IV) chloride to give the poorly soluble double salt, e.g.:[25]

Treatment of the double with hydrogen sulfide gives CsCl:[25]

High-purity CsCl is also produced from recrystallized Cs[ICl2] (and Cs[ICl4]) by thermal decomposition:[26]

Only about 20 tonnes of caesium compounds, with a major contribution from CsCl, were being produced annually around the 1970s[27] and 2000s worldwide.[28] Caesium chloride enriched with caesium-137 for radiation therapy applications is produced at a single facility Mayak in the Ural Region of Russia[29] and is sold internationally through a UK dealer. The salt is synthesized at 200 °C because of its hygroscopic nature and sealed in a thimble-shaped steel container which is then enclosed into another steel casing. The sealing is required to protect the salt from moisture.[30]

Caesium chloride is the main precursor to caesium metal by high temperature reduction:[27]

An analogous reaction – heating CsCl with calcium in vacuum in presence of phosphorus was first reported in 1905 by the French chemist M. L. Hackspill[31] and is still used industrially.[27]

Caesium chloride is widely used in centrifugation in a technique known as isopycnic centrifugation. Centripetal and diffusive forces establish a density gradient that allow separation of mixtures on the basis of their molecular density. This technique allows separation of DNA of different densities (e.g. DNA fragments with differing A-T or G-C content).[27] This application requires a solution with high density and yet relatively low viscosity, and CsCl suits it because of its high solubility in water, high density owing to the large mass of Cs, as well as low viscosity and high stability of CsCl solutions.[25]

Caesium chloride is rarely used in organic chemistry. It can act as a phase transfer catalyst reagent in selected reactions. One of these reactions is the synthesis of glutamic acid derivatives

where TBAB is tetrabutylammonium bromide (interphase catalyst) and CPME is a cyclopentyl methyl ether (solvent).[33]

Another reaction is substitution of tetranitromethane[34]

where DMF is dimethylformamide (solvent).

Caesium chloride is a reagent in traditional analytical chemistry used for detecting inorganic ions via the color and morphology of the precipitates.[35] Quantitative concentration measurement of some of these ions, e.g. Mg2+, with inductively coupled plasma mass spectrometry, is used to evaluate the hardness of water.[36]

It is also used for detection of the following ions:[37]

Medical properties of caesium chloride were studied back in 1888 by Ivan Pavlov and S. S. Botkin. They found that CsCl and RbCl induce long-term narrowing of the blood vessels (vasoconstriction) and the associated increase in the blood pressure (hypertension), stimulating the cardiovascular activity. These properties were then applied in the treatment of cardiovascular diseases.[38]

Later research indicated that CsCl alleviates cardiac dysrhythmia and that the life expectancy is higher in regions characterized by elevated levels of CsCl in water and food. Preliminary results indicate that CsCl can be used in the treatment of depressions.[39] The neurological action of CsCl is related to the protection of neurons from apoptosis and activation of caspase 3 caused by reduced potassium content.[40]

Several reports suggested that non-radioactive caesium chloride can be used in a complex treatment of some forms of cancer.[39][41][42] However, it has been linked to the deaths of over 50 patients, when it was used as part of a scientifically unvalidated cancer treatment.[43] The American Cancer Society state that "available scientific evidence does not support claims that non-radioactive cesium chloride supplements have any effect on tumors."[44]

Caesium chloride composed of radioisotopes such as 137CsCl and 131CsCl,[45][46] is used in nuclear medicine, including treatment of cancer (brachytherapy) and diagnosis of myocardial infarction.[47][48] In the production of radioactive sources, it is normal to choose a chemical form of the radioisotope which would not be readily dispersed in the environment in the event of an accident. For instance, radiothermal generators (RTGs) often use strontium titanate, which is insoluble in water. For teletherapy sources, however, the radioactive density (Ci in a given volume) needs to be very high, which is not possible with known insoluble caesium compounds. A thimble-shaped container of radioactive caesium chloride provides the active source.

Caesium chloride is used in the preparation of electrically conducting glasses[46][49] and screens of cathode ray tubes.[27] In conjunction with rare gases CsCl is used as a non-toxic reagent in excimer lamps: a gas-discharge source of ultraviolet light which uses, for example, electrically excited XeCl excimer molecules.[50] Other uses include activation of electrodes in welding;[51] manufacture of mineral water, beer[52] and drilling muds;[53] repellents[54] and high-temperature solders.[55] High-quality CsCl single crystals have a wide transparency range from UV to the infrared and therefore had been used for cuvettes, prisms and windows in optical spectrometers;[27] this use was discontinued with the development of less hygroscopic materials.

CsCl is a potent inhibitor of HCN channels which carry the h-current in excitable cells such as neurons.[56] It can therefore be useful as a tool in electrophyisiology experiments in neuroscience.

Caesium chloride has a low toxicity to human and animals.[57] Its median lethal dose (LD50) in mice is 2300 mg per kilogram of body weight for oral administration and 910 mg/kg for intravenous injection.[58] The low toxicity of CsCl is related to its ability to lower the concentration of potassium in the body and partly substitute it in biochemical processes.[59] However, caesium chloride powder can irritate the mucous membranes and cause asthma.[53]

Because of its high solubility in water, caesium chloride is highly mobile and can even diffuse through concrete. This is a drawback for its radioactive form which urges a search for more stable radioisotope materials. Commercial sources of radioactive caesium chloride are well sealed in a double steel enclosure.[30] However, in the Goiânia accident in Brazil, such a source containing about 93 gram of 137CsCl, was stolen from an abandoned hospital and forced open by two scavengers. The blue glow emitted in the dark by the radioactive caesium chloride attracted the thieves and their relatives who were unaware of the associated dangers and spread the powder. This resulted in one of the worst radiation spill accidents in which 4 people died within a month from the exposure, 20 showed signs of radiation sickness, 249 people were contaminated with radioactive caesium chloride, and about a thousand received a dose exceeding a yearly amount of background radiation. More than 110,000 people overwhelmed the local hospitals, and several city blocks had to be demolished in the cleanup operations. In the first days of the contamination, stomach disorders and nausea due to radiation sickness were experienced by several people, but only after several days one person associated the symptoms with the powder and brought a sample to the authorities.[60][61]