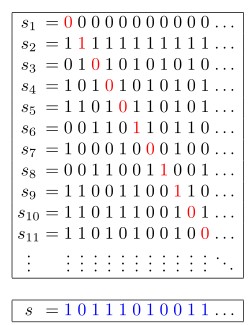 An illustration of Cantor's diagonal argument (in base 2) for the existence of uncountable sets. The sequence at the bottom cannot occur anywhere in the enumeration of sequences above.

An infinite set may have the same cardinality as a proper subset of itself, as the depicted bijection f(x)=2x from the natural to the even numbers demonstrates. Nevertheless, infinite sets of different cardinalities exist, as Cantor's diagonal argument shows.

In set theory, Cantor's diagonal argument, also called the diagonalisation argument, the diagonal slash argument or the diagonal method, was published in 1891 by Georg Cantor as a mathematical proof that there are infinite sets which cannot be put into one-to-one correspondence with the infinite set of natural numbers.[1] Such sets are now known as uncountable sets, and the size of infinite sets is now treated by the theory of cardinal numbers which Cantor began.

The diagonal argument was not Cantor's first proof of the uncountability of the real numbers; it was actually published much later than his first proof, which appeared in 1874.[2] However, it demonstrates a powerful and general technique that has since been used in a wide range of proofs, also known as diagonal arguments by analogy with the argument used in this proof. The most famous examples are perhaps Russell's paradox, the first of Gödel's incompleteness theorems, and Turing's answer to the Entscheidungsproblem.

In his 1891 article, Cantor considered the set T of all infinite sequences of binary digits (i.e. consisting only of 0es and 1s). First, he constructively shows the following theorem:

If s1, s2, … , sn, … is any enumeration of elements from T, then there is always an element s of T which corresponds to no sn in the enumeration.

To prove this, given an enumeration of arbitrary members from T, like e.g.

he constructs the sequence s by choosing its nth digit as complementary to the nth digit of sn, for every n. In the example, this yields:

By construction, s differs from each sn, since their nth digits differ (highlighted in the example). Hence, s cannot occur in the enumeration.

Based on this theorem, Cantor then uses an indirect argument to show that:

The set T is uncountable.

He assumes for contradiction that T was countable. Then (all) its elements could be written as an enumeration s1, s2, … , sn, … . Applying the above theorem to this enumeration would produce a sequence s not belonging to the enumeration. This contradicts the assumption, so T must be uncountable.

The interpretation of Cantor's result will depend upon one's view of mathematics. To constructivists, the argument shows no more than that there is no bijection between the natural numbers and T. It does not rule out the possibility that the latter are subcountable. In the context of classical mathematics, this is impossible, and the diagonal argument establishes that, although both sets are infinite, there are actually more infinite sequences of ones and zeros than there are natural numbers. 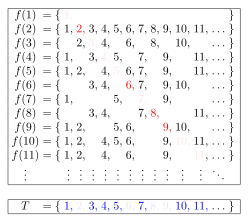 Illustration of the generalized diagonal argument: The set T = {n∈ℕ: n∉f(n)} at the bottom cannot occur anywhere in the range of f:ℕ→P(ℕ). The example mapping f happens to correspond to the example enumeration s in the above picture.

A generalized form of the diagonal argument was used by Cantor to prove Cantor's theorem: for every set S the power set of S, i.e., the set of all subsets of S (here written as P(S)), has a larger cardinality than S itself. This proof proceeds as follows:

Let f be any function from S to P(S). It suffices to prove f cannot be surjective. That means that some member T of P(S), i.e., some subset of S, is not in the image of f. As a candidate consider the set:

Russell's Paradox has shown us that naive set theory, based on an unrestricted comprehension scheme, is contradictory. Note that there is a similarity between the construction of T and the set in Russell's paradox. Therefore, depending on how we modify the axiom scheme of comprehension in order to avoid Russell's paradox, arguments such as the non-existence of a set of all sets may or may not remain valid.

The diagonal argument shows that the set of real numbers is "bigger" than the set of natural numbers (and therefore, the integers and rationals as well). Therefore, we can ask if there is a set whose cardinality is "between" that of the integers and that of the reals. This question leads to the famous continuum hypothesis. Similarly, the question of whether there exists a set whose cardinality is between |S| and |P(S)| for some infinite S leads to the generalized continuum hypothesis.

Analogues of the diagonal argument are widely used in mathematics to prove the existence or nonexistence of certain objects. For example, the conventional proof of the unsolvability of the halting problem is essentially a diagonal argument. Also, diagonalization was originally used to show the existence of arbitrarily hard complexity classes and played a key role in early attempts to prove P does not equal NP. In 2008, diagonalization was used to "slam the door" on Laplace's demon.[3]

The above proof fails for W. V. Quine's "New Foundations" set theory (NF). In NF, the naive axiom scheme of comprehension is modified to avoid the paradoxes by introducing a kind of "local" type theory. In this axiom scheme,

is not a set — i.e., does not satisfy the axiom scheme. On the other hand, we might try to create a modified diagonal argument by noticing that

The proof follows by the fact that if f were indeed a map onto P(S), then we could find r in S, such that f({r}) coincides with the modified diagonal set, above. We would conclude that if r is not in f({r}), then r is in f({r}) and vice-versa.

It is not possible to put P1(S) in a one-to-one relation with S, as the two have different types, and so any function so defined would violate the typing rules for the comprehension scheme.