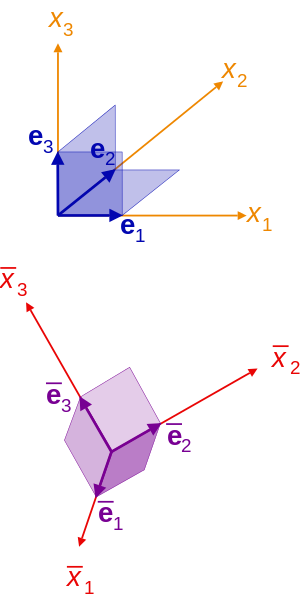 In geometry and linear algebra, a Cartesian tensor uses an orthonormal basis to represent a tensor in a Euclidean space in the form of components. Converting a tensor's components from one such basis to another is through an orthogonal transformation.

Use of Cartesian tensors occurs in physics and engineering, such as with the Cauchy stress tensor and the moment of inertia tensor in rigid body dynamics. Sometimes general curvilinear coordinates are convenient, as in high-deformation continuum mechanics, or even necessary, as in general relativity. While orthonormal bases may be found for some such coordinate systems (e.g. tangent to spherical coordinates), Cartesian tensors may provide considerable simplification for applications in which rotations of rectilinear coordinate axes suffice. The transformation is a passive transformation, since the coordinates are changed and not the physical system.

In 3d Euclidean space, ℝ3, the standard basis is ex, ey, ez. Each basis vector points along the x-, y-, and z-axes, and the vectors are all unit vectors (or normalized), so the basis is orthonormal.

Throughout, when referring to Cartesian coordinates in three dimensions, a right-handed system is assumed and this is much more common than a left-handed system in practice, see orientation (vector space) for details.

For Cartesian tensors of order 1, a Cartesian vector a can be written algebraically as a linear combination of the basis vectors ex, ey, ez:

where the coordinates of the vector with respect to the Cartesian basis are denoted ax, ay, az. It is common and helpful to display the basis vectors as column vectors

when we have a coordinate vector in a column vector representation:

A row vector representation is also legitimate, although in the context of general curvilinear coordinate systems the row and column vector representations are used separately for specific reasons – see Einstein notation and covariance and contravariance of vectors for why.

The term "component" of a vector is ambiguous: it could refer to:

A more general notation is tensor index notation, which has the flexibility of numerical values rather than fixed coordinate labels. {{safesubst:#invoke:anchor|main}}The Cartesian labels are replaced by tensor indices in the basis vectors ex ↦ e1, ey ↦ e2, ez ↦ e3 and coordinates Ax ↦ A1, Ay ↦ A2, Az ↦ A3. In general, the notation e1, e2, e3 refers to any basis, and A1, A2, A3 refers to the corresponding coordinate system; although here they are restricted to the Cartesian system. Then:

It is standard to use the Einstein notation – the summation sign for summation over an index repeated only twice within a term may be suppressed for notational conciseness:

An advantage of the index notation over coordinate-specific notations is the independence of the dimension of the underlying vector space, i.e. the same expression on the right hand side takes the same form in higher dimensions (see below). Previously, the Cartesian labels x, y, z were just labels and not indices. (It is informal to say "i = x, y, z").

A dyadic tensor T is an order 2 tensor formed by the tensor product ⊗ of two Cartesian vectors a and b, written T = a ⊗ b. Analogous to vectors, it can be written as a linear combination of the tensor basis ex ⊗ ex ≡ exx, ex ⊗ ey ≡ exy, ..., ez ⊗ ez ≡ ezz (the right hand side of each identity is only an abbreviation, nothing more):

Representing each basis tensor as a matrix:

then T can be represented more systematically as a matrix:

See matrix multiplication for the notational correspondence between matrices and the dot and tensor products.

More generally, whether or not T is a tensor product of two vectors, it is always a linear combination of the basis tensors with coordinates Txx, Txy, ... Tzz:

and in matrix form:

Second order tensors occur naturally in physics and engineering when physical quantities have directional dependence in the system, often in a "stimulus-response" way. This can be mathematically seen through one aspect of tensors - they are multilinear functions. A second order tensor T which takes in a vector u of some magnitude and direction will return a vector v; of a different magnitude and in a different direction to u, in general. The notation used for functions in mathematical analysis leads us to write v = T(u),[1] while the same idea can be expressed in matrix and index notations[2] (including the summation convention), respectively:

By "linear", if u = ρr + σs for two scalars ρ and σ and vectors r and s, then in function and index notations:

and similarly for the matrix notation. The function, matrix, and index notations all mean the same thing. The matrix forms provide a clear display of the components, while the index form allows easier tensor-algebraic manipulation of the formulae in a compact manner. Both provide the physical interpretation of directions; vectors have one direction, while second order tensors connect two directions together. One can associate a tensor index or coordinate label with a basis vector direction.

The previous idea can be continued: if T takes in two vectors p and q, it will return a scalar r. In function notation we write r = T(p, q), while in matrix and index notations (including the summation convention) respectively:

The tensor T is linear in both input vectors. When vectors and tensors are written without reference to components, and indices are not used, sometimes a dot · is placed where summations over indices (known as tensor contractions) are taken. For the above cases:[1][2]

motivated by the dot product notation:

More generally, a tensor of order m which takes in n vectors (where n is between 0 and m inclusive) will return a tensor of order m − n, see Tensor: As multilinear maps for further generalizations and details. The concepts above also apply to pseudovectors in the same way as for vectors. The vectors and tensors themselves can vary within throughout space, in which case we have vector fields and tensor fields, and can also depend on time.

Following are some examples:

For the electrical conduction example, the index and matrix notations would be:

while for the rotational kinetic energy T:

Vectors and tensors in n dimensions

In n-dimensional Euclidean space over the real numbers, ℝn, the standard basis is denoted e1, e2, e3, ... en. Each basis vector ei points along the positive xi axis, with the basis being orthonormal. Component j of ei is given by the Kronecker delta:

A vector in ℝn takes the form:

Similarly for the order 2 tensor above, for each vector a and b in ℝn:

Transformations of Cartesian vectors (any number of dimensions)

Meaning of "invariance" under coordinate transformations

Each new coordinate is a function of all the old ones, and vice versa for the inverse function:

and similarly each new basis vector is a function of all the old ones, and vice versa for the inverse function:

The determinant of L is det(L) = ±1, which corresponds to two types of orthogonal transformation: (+1) for rotations and (−1) for improper rotations (including reflections).

There are considerable algebraic simplifications, the matrix transpose is the inverse from the definition of an orthogonal transformation:

From the previous table, orthogonal transformations of covectors and contravectors are identical. There is no need to differ between raising and lowering indices, and in this context and applications to physics and engineering the indices are usually all subscripted to remove confusion for exponents. All indices will be lowered in the remainder of this article. One can determine the actual raised and lowered indices by considering which quantities are covectors or contravectors, and the relevant transformation rules.

Exactly the same transformation rules apply to any vector a, not only the position vector. If its components ai do not transform according to the rules, a is not a vector.

Despite the similarity between the expressions above, for the change of coordinates such as Template:Overlinej = Lijxi, and the action of a tensor on a vector like bi = Tijaj, L is not a tensor, but T is. In the change of coordinates, L is a matrix, used to relate two rectangular coordinate systems with orthonormal bases together. For the tensor relating a vector to a vector, the vectors and tensors throughout the equation all belong to the same coordinate system and basis.

The entries of L are partial derivatives of the new or old coordinates with respect to the old or new coordinates, respectively.

Differentiating Template:Overlinei with respect to xk:

is an element of the Jacobian matrix. There is a (partially mnemonical) correspondence between index positions attached to L and in the partial derivative: i at the top and j at the bottom, in each case, although for Cartesian tensors the indices can be lowered.

is an element of the inverse Jacobian matrix, with a similar index correspondence.

Many sources state transformations in terms of the partial derivatives:

and the explicit matrix equations in 3d are: 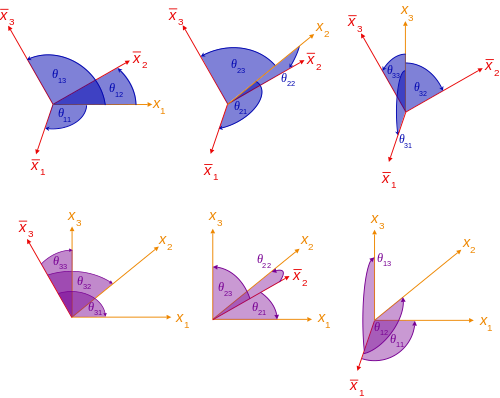 Top: Angles from the xi axes to the Template:Overlinei axes. Bottom: Vice versa.

As with all linear transformations, L depends on the basis chosen. For two orthonormal bases

Hence the components reduce to direction cosines between the Template:Overlinei and xj axes:

where θij and θji are the angles between the Template:Overlinei and xj axes. In general, θij is not equal to θji, because for example θ12 and θ21 are two different angles.

The transformation of coordinates can be written:

and the explicit matrix equations in 3d are:

The numbers ei⋅ej arranged into a matrix would form a symmetric matrix (a matrix equal to its own transpose) due to the symmetry in the dot products, in fact it is the metric tensor g. By contrast ei⋅Template:Overlinej or Template:Overlinei⋅ej do not form symmetric matrices in general, as displayed above. Therefore, while the L matrices are still orthogonal, they are not symmetric.

Transformation of the dot and cross products (three dimensions only)

The dot product and cross product occur very frequently, in applications of vector analysis to physics and engineering, examples include:

How these products transform under orthogonal transformations is illustrated below.

The dot product ⋅ of each possible pairing of the basis vectors follows from the basis being orthonormal. For perpendicular pairs we have

while for parallel pairs we have

Replacing Cartesian labels by index notation as shown above, these results can be summarized by

where δij are the components of the Kronecker delta. The Cartesian basis can be used to represent δ in this way.

In addition, each metric tensor component gij with respect to any basis is the dot product of a pairing of basis vectors:

For the Cartesian basis the components arranged into a matrix are:

so are the simplest possible for the metric tensor, namely the δ:

This is not true for general bases: orthogonal coordinates have diagonal metrics containing various scale factors (i.e. not necessarily 1), while general curvilinear coordinates could also have nonzero entries for off-diagonal components.

For the cross product × of two vectors, the results are (almost) the other way round. Again, assuming a right-handed 3d Cartesian coordinate system, cyclic permutations in perpendicular directions yield the next vector in the cyclic collection of vectors:

and replacing Cartesian labels by index notation as above, these can be summarized by:

which geometrically corresponds to the volume of a cube spanned by the orthonormal basis vectors, with sign indicating orientation (and not a "positive or negative volume"). Here, the orientation is fixed by ε123 = +1, for a right-handed system. A left-handed system would fix ε123 = −1 or equivalently ε321 = +1.

The scalar triple product can now be written:

with the geometric interpretation of volume (of the parallelepiped spanned by a, b, c) and algebraically is a determinant:[3]

This in turn can be used to rewrite the cross product of two vectors as follows:

Contrary to its appearance, the Levi-Civita symbol is not a tensor, but a pseudotensor, the components transform according to:

Therefore the transformation of the cross product of a and b is: