Centrifugal pumps are a sub-class of dynamic axisymmetric work-absorbing turbomachinery.[1] Centrifugal pumps are used to transport fluids by the conversion of rotational kinetic energy to the hydrodynamic energy of the fluid flow. The rotational energy typically comes from an engine or electric motor. The fluid enters the pump impeller along or near to the rotating axis and is accelerated by the impeller, flowing radially outward into a diffuser or volute chamber (casing), from where it exits.

Common uses include water, sewage, petroleum and petrochemical pumping. The reverse function of the centrifugal pump is a water turbine converting potential energy of water pressure into mechanical rotational energy.

According to Reti, the first machine that could be characterized as a centrifugal pump was a mud lifting machine which appeared as early as 1475 in a treatise by the Italian Renaissance engineer Francesco di Giorgio Martini.[2] True centrifugal pumps were not developed until the late 17th century, when Denis Papin built one using straight vanes. The curved vane was introduced by British inventor John Appold in 1851. 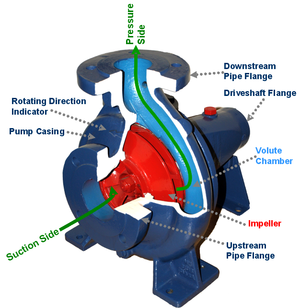 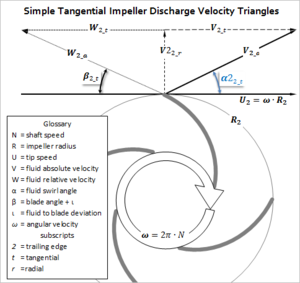 General explanation: Like most pumps, a centrifugal pump converts mechanical energy from a motor to energy of a moving fluid. A portion of the energy goes into kinetic energy of the fluid. Fluid enters axially through eye of the casing,is caught up in the impeller blades,and is whirled tangentially and radially outward until it leaves through all circumferential parts of the impeller into the diffuser part of the casing. The fluid gains both velocity and pressure while passing through the impeller. The doughnut-shaped diffuser,or scroll,section of the casing decelerates the flow and further increase the pressure.

Figure 2.1 -- the forces affect on a mass going along an impeller vane.

Applying classical mechanics theory, assuming viscosity of the liquid equal 0 and no energy loss for the work of energy transferring from impeller to the streamlines which means that, all separate flow will be uniforms (this approximations of physical reality to get the simpler as solid state mechanism than hydraulic mechanism)

Observe a mass going along a straight vane impeller (the oldest and simplest impeller), there are these forces impact on it :

1- The impeller vane push on it a force Fc, it reflect an anti force F' on the vane

Applying Bernoulli principle: The first force cause the absolute velocity of the object as circumferential speed which means dynamic head pressure

The second force create the static pressure. If a mass moves radially outward along a vane of the impeller it's orbit will be a spiral-shaped curve. We can easily calculate it’s angular speed In two dimensions the angular velocity ω is given by

So during it movement the centrifugal force Fc always present as

The centrifugal acceleration increase linearity on the radius of rotary R(variable) In constant gravitational acceleration g, static pressure of a column of water h is

Apply similar calculation we will have

the head pressure created by the backward curved vane impeller is

The necessity of the new theory

Compare the two way the old and the new description how the impeller supply energy for the object going through it we see: New way shows how the centrifugal force appear and it's effective on an object going through the impeller. while the old way only mentioned about the inertial force interaction between the impeller van and the object, which means that conservation of momentum principal can not ever describe centrifugal force including energy relation with it because it is the diametrically force it can not make the torque on the rotary shaft.

By Sir Euler in 19th Century

Another consequence of Newton’s 2nd law of mechanics is the conservation of the angular momentum (or the “moment of momentum”) which is of fundamental significance to all turbomachines. Accordingly, the change of the angular momentum is equal to the sum of the external moments. Angular momentums ρ×Q×r×cu at inlet and outlet, an external torque M and friction moments due to shear stresses Mτ are acting on an impeller or a diffuser.

Since no pressure forces are created on cylindrical surfaces in the circumferential direction, it is possible to write Eq. (1.10) as:

Base on Eq.(1.13) Sir Euler developed the head pressure equation created by the impeller see Fig.2.2

In Eq. (2) the sum of 4 front element number call static pressure,the sum of last 2 element number call velocity pressure look carefully on the Fig 2.2 and the detail equation. It is so hard ! to study and understand it. Especially and very strange that the curved respond of this equation is always linearity.

The color triangle formed by velocity vector u,c,w call 'triangle velocity" this is an important role in old academic, this rule was helpful to detail Eq.(1) become Eq.(2) and wide explained how the pump works.

is the fluid density (kg/m3)

is the energy Head added to the flow (m)

is the efficiency of the pump plant as a decimal

The head added by the pump (

) is a sum of the static lift, the head loss due to friction and any losses due to valves or pipe bends all expressed in metres of fluid. Power is more commonly expressed as kilowatts (103 W, kW) or horsepower (hp = kW*0.746). The value for the pump efficiency,

, may be stated for the pump itself or as a combined efficiency of the pump and motor system.

Vertical centrifugal pumps are also referred to as cantilever pumps. They utilize a unique shaft and bearing support configuration that allows the volute to hang in the sump while the bearings are outside the sump. This style of pump uses no stuffing box to seal the shaft but instead utilizes a "throttle bushing". A common application for this style of pump is in a parts washer.

In the mineral industry, or in the extraction of oilsand, froth is generated to separate the rich minerals or bitumen from the sand and clays. Froth contains air that tends to block conventional pumps and cause loss of prime. Over history, industry has developed different ways to deal with this problem. One approach consists of using vertical pumps with a tank. Another approach is to build special pumps with an impeller capable of breaking the air bubbles. In the pulp and paper industry holes are drilled in the impeller. Air escapes to the back of the impeller and a special expeller discharges the air back to the suction tank. The impeller may also feature special small vanes between the primary vanes called split vanes or secondary vanes. Some pumps may feature a large eye, an inducer or recirculation of pressurized froth from the pump discharge back to the suction to break the bubbles.[4]

All energy transferred to the fluid is derived from the mechanical energy driving the impeller. This can be measured at isentropic compression, resulting in a slight temperature increase (in addition to the pressure increase).

The energy usage in a pumping installation is determined by the flow required, the height lifted and the length and friction characteristics of the pipeline. The power required to drive a pump (

is the input power required (W)

is the fluid density (kg/m3)

is the energy Head added to the flow (m)

is the efficiency of the pump plant as a decimal

The head added by the pump (

) is a sum of the static lift, the head loss due to friction and any losses due to valves or pipe bends all expressed in metres of fluid. Power is more commonly expressed as kilowatts (103 W, kW) or horsepower (kW = hp*0.746). The value for the pump efficiency,

, may be stated for the pump itself or as a combined efficiency of the pump and motor system.

The energy usage is determined by multiplying the power requirement by the length of time the pump is operating.

These are some difficulties faced in centrifugal pumps:[5] File:Open Type Centrifugal Pump Impeller.ogv

An oilfield solids control system needs many centrifugal pumps to sit on or in mud tanks. The types of centrifugal pumps used are sand pumps, submersible slurry pumps, shear pumps, and charging pumps. They are defined for their different functions, but their working principle is the same.

Magnetically coupled pumps, or magnetic drive pumps, vary from the traditional pumping style, as the motor is coupled to the pump by magnetic means rather than by a direct mechanical shaft. The pump works via a drive magnet, 'driving' the pump rotor, which is magnetically coupled to the primary shaft driven by the motor.[6] They are often used where leakage of the fluid pumped poses a great risk (e.g., aggressive fluid in the chemical or nuclear industry, or electric shock - garden fountains). They have no direct connection between the motor shaft and the impeller, so no gland is needed. There is no risk of leakage, unless the casing is broken. Since the pump shaft is not supported by bearings outside the pump's housing, support inside the pump is provided by bushings. The materials of construction of these bushings and the required clearances of the parts may restrict the kinds of fluids for which this kind of pump may be used.

Eliminating the drive seals gets rid of leaks, friction loss, wear and noise. It provides complete separation of fluid from the pump drive, and nearly 100% transfer of motor power into pumping power.

The impeller of such a pump is magnetically coupled with the motor, across a separation wall which is resistant to the fluid pumped. The motor drives a rotor carrying one or several pairs of permanent magnets, and these drag around a second pair(s) of permanent magnets attached to the pump impeller.

Most centrifugal pumps are not self-priming. In other words, the pump casing must be filled with liquid before the pump is started, or the pump will not be able to function. If the pump casing becomes filled with vapors or gases, the pump impeller becomes gas-bound and incapable of pumping. To ensure that a centrifugal pump remains primed and does not become gas-bound, most centrifugal pumps are located below the level of the source from which the pump is to take its suction. The same effect can be gained by supplying liquid to the pump suction under pressure supplied by another pump placed in the suction line.