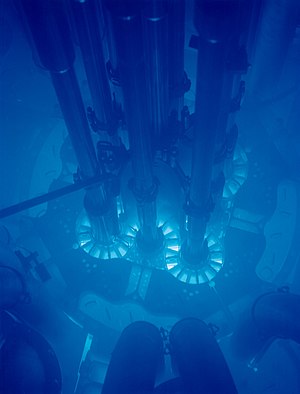 Cherenkov radiation glowing in the core of the Advanced Test Reactor. 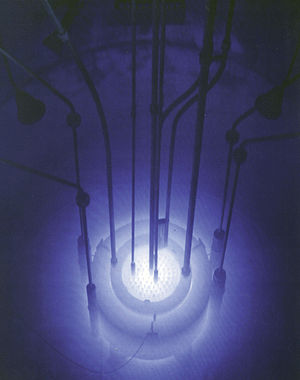 NRC photo of Cherenkov effect in the Reed Research Reactor.

Cherenkov radiation, also known as Vavilov-Cherenkov radiation, (also spelled Čerenkov or Cerenkov) is electromagnetic radiation emitted when a charged particle (such as an electron) passes through a dielectric medium at a speed greater than the phase velocity of light in that medium. The characteristic blue glow of an underwater nuclear reactor is due to Cherenkov radiation. It is named after Soviet scientist Pavel Alekseyevich Cherenkov, the 1958 Nobel Prize winner who was the first to detect it experimentally.[1] A theory of this effect was later developed within the framework of Einstein's special relativity theory by Igor Tamm and Ilya Frank, who also shared the Nobel Prize. Cherenkov radiation had been theoretically predicted by the English polymath Oliver Heaviside in papers published in 1888–1889.[2]

While electrodynamics holds that the speed of light in a vacuum is a universal constant (c), the speed at which light propagates in a material may be significantly less than c. For example, the speed of the propagation of light in water is only 0.75c. Matter can be accelerated beyond this speed (although still to less than c) during nuclear reactions and in particle accelerators. Cherenkov radiation results when a charged particle, most commonly an electron, travels through a dielectric (electrically polarizable) medium with a speed greater than that at which light would otherwise propagate in the same medium.

Moreover, the velocity that must be exceeded is the phase velocity of light rather than the group velocity of light. The phase velocity can be altered dramatically by employing a periodic medium, and in that case one can even achieve Cherenkov radiation with no minimum particle velocity, a phenomenon known as the Smith-Purcell effect. In a more complex periodic medium, such as a photonic crystal, one can also obtain a variety of other anomalous Cherenkov effects, such as radiation in a backwards direction (whereas ordinary Cherenkov radiation forms an acute angle with the particle velocity).[3]

The geometry of the Cherenkov radiation (shown for the ideal case of no dispersion).

A common analogy is the sonic boom of a supersonic aircraft or bullet. The sound waves generated by the supersonic body propagate at the speed of sound itself; as such, the waves travel slower than the speeding object and cannot propagate forward from the body, instead forming a shock front. In a similar way, a charged particle can generate a light shock wave as it travels through an insulator.

In the figure, the particle (red arrow) travels in a medium with speed

is speed of light in vacuum, and

is the refractive index of the medium. (If the medium is water, the condition is

whereas the emitted electromagnetic waves are constricted to travel the distance

Note that since this ratio is independent of time, one can take arbitrary times and achieve similar triangles. The angle stays the same, meaning that subsequent waves generated between the initial time t=0 and final time t will form similar triangles with coinciding right endpoints to the one shown.

A reverse Cherenkov effect can be experienced using materials called negative-index metamaterials (materials with a subwavelength microstructure that gives them an effective "average" property very different from their constituent materials, in this case having negative permittivity and negative permeability). This means, when a charged particle (usually electrons) passes through a medium at a speed greater than the speed of light in that medium, that particle will radiate from a cone behind itselfTemplate:Clarify, rather than in front of it (as is the case in normal materials, with both permittivity and permeability positive).[4] One can also obtain such reverse-cone Cherenkov radiation in non-metamaterial periodic media (where the periodic structure is on the same scale as the wavelength, so it cannot be treated as an effectively homogeneous metamaterial).[3]

There is a cut-off frequency above which the equation

can no longer be satisfied. The refractive index

varies with frequency (and hence with wavelength) in such a way that the intensity cannot continue to increase at ever shorter wavelengths, even for very relativistic particles (where v/c is close to 1). At X-ray frequencies, the refractive index becomes less than unity (note that in media the phase velocity may exceed c without violating relativity) and hence no X-ray emission (or shorter wavelength emissions such as gamma rays) would be observed. However, X-rays can be generated at special frequencies just below the frequencies corresponding to core electronic transitions in a material, as the index of refraction is often greater than 1 just below a resonant frequency (see Kramers-Kronig relation and anomalous dispersion).

As in sonic booms and bow shocks, the angle of the shock cone is directly related to the velocity of the disruption. The Cherenkov angle is zero at the threshold velocity for the emission of Cherenkov radiation. The angle takes on a maximum as the particle speed approaches the speed of light. Hence, observed angles of incidence can be used to compute the direction and speed of a Cherenkov radiation-producing charge.

Cherenkov radiation can be generated in the eye by charged particles hitting the vitreous humour, giving the impression of flashes,[5] as in cosmic ray visual phenomena and possibly some observations of criticality accidents.

Cherenkov radiation is widely used to facilitate the detection of small amounts and low concentrations of biomolecules.[6] Radioactive atoms such as phosphorus-32 are readily introduced into biomolecules by enzymatic and synthetic means and subsequently may be easily detected in small quantities for the purpose of elucidating biological pathways and in characterizing the interaction of biological molecules such as affinity constants and dissociation rates.

More recently, it has been used to image substances in the body.[7][8] 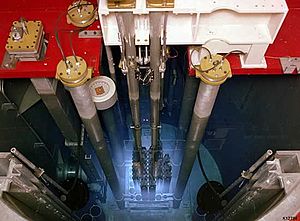 When a high-energy (TeV) gamma photon or cosmic ray interacts with the Earth's atmosphere, it may produce an electron-positron pair with enormous velocities. The Cherenkov radiation from these charged particles is used to determine the source and intensity of the cosmic ray or gamma ray, which is used for example in the Imaging Atmospheric Cherenkov Technique (IACT), by experiments such as VERITAS, H.E.S.S. and MAGIC. Similar methods are used in very large neutrino detectors, such as the Super-Kamiokande, the Sudbury Neutrino Observatory (SNO) and IceCube. In the Pierre Auger Observatory and other similar projects tanks filled with water observe the Cherenkov radiation caused by muons, electrons and positrons of particle showers which are caused by cosmic rays.

Cherenkov radiation can also be used to determine properties of high-energy astronomical objects that emit gamma rays, such as supernova remnants and blazars. This is done by projects such as STACEE, a gamma ray detector in New Mexico.

Cherenkov radiation is commonly used in experimental particle physics for particle identification. One could measure (or put limits on) the velocity of an electrically charged elementary particle by the properties of the Cherenkov light it emits in a certain medium. If the momentum of the particle is measured independently, one could compute the mass of the particle by its momentum and velocity (see four-momentum), and hence identify the particle.

The simplest type of particle identification device based on a Cherenkov radiation technique is the threshold counter, which gives an answer as to whether the velocity of a charged particle is lower or higher than a certain value (

is the speed of light, and

is the refractive index of the medium) by looking at whether this particle does or does not emit Cherenkov light in a certain medium. Knowing particle momentum, one can separate particles lighter than a certain threshold from those heavier than the threshold.

The most advanced type of a detector is the RICH, or ring imaging Cherenkov detector, developed in the 1980s. In a RICH detector, a cone of Cherenkov light is produced when a high speed charged particle traverses a suitable medium, often called radiator. This light cone is detected on a position sensitive planar photon detector, which allows reconstructing a ring or disc, the radius of which is a measure for the Cherenkov emission angle. Both focusing and proximity-focusing detectors are in use. In a focusing RICH detector, the photons are collected by a spherical mirror and focused onto the photon detector placed at the focal plane. The result is a circle with a radius independent of the emission point along the particle track. This scheme is suitable for low refractive index radiators—i.e. gases—due to the larger radiator length needed to create enough photons. In the more compact proximity-focusing design, a thin radiator volume emits a cone of Cherenkov light which traverses a small distance—the proximity gap—and is detected on the photon detector plane. The image is a ring of light, the radius of which is defined by the Cherenkov emission angle and the proximity gap. The ring thickness is determined by the thickness of the radiator. An example of a proximity gap RICH detector is the High Momentum Particle Identification Detector (HMPID),[9] a detector currently under construction for ALICE (A Large Ion Collider Experiment), one of the six experiments at the LHC (Large Hadron Collider) at CERN.