Individual left and right footprints are chiral enantiomorphs in a plane because they are mirror images while containing no mirror symmetry individually.

In geometry, a figure is chiral (and said to have chirality) if it is not identical to its mirror image, or, more precisely, if it cannot be mapped to its mirror image by rotations and translations alone. An object that is not chiral is said to be achiral. In 3 dimensions, not all achiral objects have a mirror plane. For example, a 3-dimensional object with inversion centre as its only nontrivial symmetry operation is achiral but has no mirror plane.{{ safesubst:#invoke:Unsubst||date=__DATE__ |$B= {{#invoke:Category handler|main}}{{#invoke:Category handler|main}}[citation needed] }} 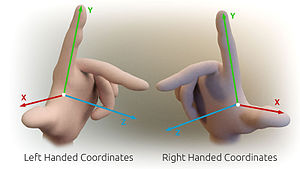 Some chiral three-dimensional objects, such as the helix, can be assigned a right or left handedness, according to the right-hand rule.

Many other familiar objects exhibit the same chiral symmetry of the human body, such as gloves and shoes. A right shoe is different from a left shoe only for being mirror images of each other. In contrast thin gloves may not be considered chiral if you can wear them inside-out.{{ safesubst:#invoke:Unsubst||date=__DATE__ |$B= {{#invoke:Category handler|main}}{{#invoke:Category handler|main}}[citation needed] }}

The J, L, S and Z-shaped tetrominoes of the popular video game Tetris also exhibit chirality, but only in a two-dimensional space. Individually they contain no mirror symmetry in the plane.

A figure is achiral if and only if its symmetry group contains at least one orientation-reversing isometry. (In Euclidean geometry any isometry can be written as

with an orthogonal matrix

is chosen to be the

-plane of the coordinate system. A center of symmetry of a figure

is chosen to be the origin of the coordinate system.) Note, however, that there are achiral figures lacking both plane and center of symmetry. An example is the figure

which is invariant under the orientation reversing isometry

and thus achiral, but it has neither plane nor center of symmetry. The figure

also is achiral as the origin is a center of symmetry, but it lacks a plane of symmetry.

Note also that achiral figures can have a center axis.

The colored bracelet in the middle is chiral in 2-dimensions, the two others are achiral. The left and right images contain a horizontal reflection line.

is chosen to be the

-axis of the coordinate system.) Consider the following pattern:

This figure is chiral, as it is not identical to its mirror image:

But if one prolongs the pattern in both directions to infinity, one receives an (unbounded) achiral figure which has no axis of symmetry. Its symmetry group is a frieze group generated by a single glide reflection.

A knot is called achiral if it can be continuously deformed into its mirror image, otherwise it is called a chiral knot. For example the unknot and the figure-eight knot are achiral, whereas the trefoil knot is chiral.