A circle is a simple closed curve which divides the plane into two regions: an interior and an exterior. In everyday use, the term "circle" may be used interchangeably to refer to either the boundary of the figure, or to the whole figure including its interior; in strict technical usage, the circle is the former and the latter is called a disk.

A circle may also be defined as a special ellipse in which the two foci are coincident and the eccentricity is 0, or the two-dimensional shape enclosing the most area per unit perimeter, using calculus of variations.

A circle is a plane figure bounded by one line, and such that all right lines drawn from a certain point within it to the bounding line, are equal. The bounding line is called its circumference and the point, its centre. 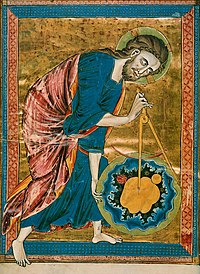 The compass in this 13th-century manuscript is a symbol of God's act of Creation. Notice also the circular shape of the halo

The word "circle" derives from the Greek κίρκος/κύκλος (kirkos/kuklos), itself a metathesis of the Homeric Greek κρίκος (krikos), meaning "hoop" or "ring".[2] The origins of the words "circus" and "circuit" are closely related. 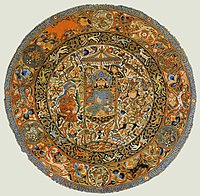 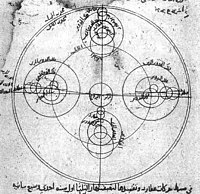 The circle has been known since before the beginning of recorded history. Natural circles would have been observed, such as the Moon, Sun, and a short plant stalk blowing in the wind on sand, which forms a circle shape in the sand. The circle is the basis for the wheel, which, with related inventions such as gears, makes much of modern machinery possible. In mathematics, the study of the circle has helped inspire the development of geometry, astronomy, and calculus.

Early science, particularly geometry and astrology and astronomy, was connected to the divine for most medieval scholars, and many believed that there was something intrinsically "divine" or "perfect" that could be found in circles.[3][4]

Some highlights in the history of the circle are: 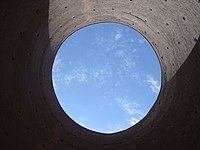 Tughrul Tower from inside

Template:Rellink The ratio of a circle's circumference to its diameter is π (pi), an irrational constant approximately equal to 3.141592654. Thus the length of the circumference C is related to the radius r and diameter d by: 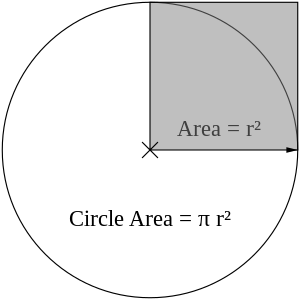 Area enclosed by a circle = π × area of the shaded square

{{#invoke:main|main}} As proved by Archimedes, the area enclosed by a circle is equal to that of a triangle whose base has the length of the circle's circumference and whose height equals the circle's radius,[7] which comes to π multiplied by the radius squared:

that is, approximately 79 percent of the circumscribing square (whose side is of length d).

The circle is the plane curve enclosing the maximum area for a given arc length. This relates the circle to a problem in the calculus of variations, namely the isoperimetric inequality. 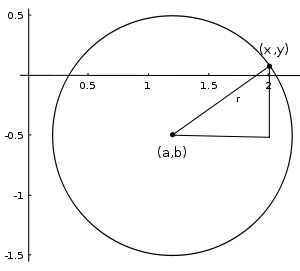 In an x–y Cartesian coordinate system, the circle with centre coordinates (a, b) and radius r is the set of all points (x, y) such that

This equation, known as the Equation of the Circle, follows from the Pythagorean theorem applied to any point on the circle: as shown in the diagram to the right, the radius is the hypotenuse of a right-angled triangle whose other sides are of length x − a and y − b. If the circle is centred at the origin (0, 0), then the equation simplifies to

where t is a parametric variable in the range 0 to 2π, interpreted geometrically as the angle that the ray from (a, b) to (x, y) makes with the x-axis.

An alternative parametrisation of the circle is:

In this parametrisation, the ratio of t to r can be interpreted geometrically as the stereographic projection of the line passing through the centre parallel to the x-axis (see Tangent half-angle substitution).

It can be proven that a conic section is a circle exactly when it contains (when extended to the complex projective plane) the points I(1: i: 0) and J(1: −i: 0). These points are called the circular points at infinity.

In polar coordinates the equation of a circle is:

where a is the radius of the circle,

is the polar coordinate of a generic point on the circle, and

In the general case, the equation can be solved for r, giving

the solution with a minus sign in front of the square root giving the same curve.

In the complex plane, a circle with a centre at c and radius (r) has the equation

. In parametric form this can be written

for real p, q and complex g is sometimes called a generalised circle. This becomes the above equation for a circle with

If y1 ≠ b then the slope of this line is

This can also be found using implicit differentiation.

and its slope is

The sagitta is the vertical segment.

Another proof of this result which relies only on two chord properties given above is as follows. Given a chord of length y and with sagitta of length x, since the sagitta intersects the midpoint of the chord, we know it is part of a diameter of the circle. Since the diameter is twice the radius, the "missing" part of the diameter is (2r − x) in length. Using the fact that one part of one chord times the other part is equal to the same product taken along a chord intersecting the first chord, we find that (2r − x)x = (y / 2)2. Solving for r, we find the required result. 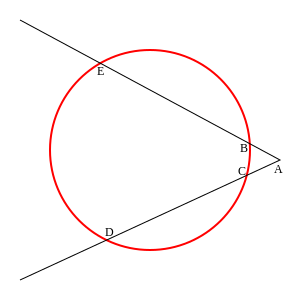 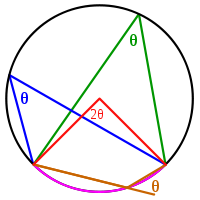 Apollonius of Perga showed that a circle may also be defined as the set of points in a plane having a constant ratio (other than 1) of distances to two fixed foci, A and B.[11][12] (The set of points where the distances are equal is the perpendicular bisector of A and B, a line.) That circle is sometimes said to be drawn about two points.

The proof is in two parts. First, one must prove that, given two foci A and B and a ratio of distances, any point P satisfying the ratio of distances must fall on a particular circle. Let C be another point, also satisfying the ratio and lying on segment AB. By the angle bisector theorem the line segment PC will bisect the interior angle APB, since the segments are similar:

Second, see[13]:p.15 for a proof that every point on the indicated circle satisfies the given ratio.

A closely related property of circles involves the geometry of the cross-ratio of points in the complex plane. If A, B, and C are as above, then the circle of Apollonius for these three points is the collection of points P for which the absolute value of the cross-ratio is equal to one:

Stated another way, P is a point on the circle of Apollonius if and only if the cross-ratio [A,B;C,P] is on the unit circle in the complex plane.

{{#invoke:see also|seealso}} If C is the midpoint of the segment AB, then the collection of points P satisfying the Apollonius condition

is not a circle, but rather a line.

Thus, if A, B, and C are given distinct points in the plane, then the locus of points P satisfying the above equation is called a "generalised circle." It may either be a true circle or a line. In this sense a line is a generalised circle of infinite radius.

Circles inscribed in or circumscribed about other figures

In every triangle a unique circle, called the incircle, can be inscribed such that it is tangent to each of the three sides of the triangle.[14]

About every triangle a unique circle, called the circumcircle, can be circumscribed such that it goes through each of the triangle's three vertices.[15]

A tangential polygon, such as a tangential quadrilateral, is any convex polygon within which a circle can be inscribed that is tangent to each side of the polygon.[16]

A cyclic polygon is any convex polygon about which a circle can be circumscribed, passing through each vertex. A well-studied example is the cyclic quadrilateral.

A hypocycloid is a curve that is inscribed in a given circle by tracing a fixed point on a smaller circle that rolls within and tangent to the given circle.

Circle as limiting case of other figures

The circle can be viewed as a limiting case of each of various other figures:

Squaring the circle is the problem, proposed by ancient geometers, of constructing a square with the same area as a given circle by using only a finite number of steps with compass and straightedge.

In 1882, the task was proven to be impossible, as a consequence of the Lindemann–Weierstrass theorem which proves that pi (π) is a transcendental number, rather than an algebraic irrational number; that is, it is not the root of any polynomial with rational coefficients.

Of a conic section