Given a population whose members can be potentially separated into a number of different sets or classes, a classification rule is a procedure in which the elements of the population set are each assigned to one of the classes.[1] A perfect test is such that every element in the population is assigned to the class it really belongs. An imperfect test is such that some errors appear, and then statistical analysis must be applied to analyse the classification. 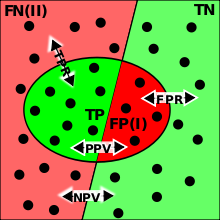 The confusion matrix can be used to derive four basic measures

Having a dataset consisting in couples x and y, where x is each element of the population and y the class it belongs to, a classification rule can be considered as a function that assigns its class to each element. A binary classification is such that the label y can take only a two values.

A classification rule or classifier is a function h that can be evaluated for any possible value of x, specifically, given the data

, h(x) will yields a similar classification

as close as possible to the true group label y.

. In a binary classification, the elements that are not correctly classified are named false positives and false negatives.

as well as possible, where the quality of this approximation needs to be judged on the basis of the statistical or probabilistic properties of the overall population from which future observations will be drawn.

When the classification function is not perfect, false results will appear. The example confusion matrix below, of the 8 actual cats, a function predicted that three were dogs, and of the six dogs, it predicted that one was a rabbit and two were cats. We can see from the matrix that the system in question has trouble distinguishing between cats and dogs, but can make the distinction between rabbits and other types of animals pretty well.

When dealing with binary classifications these concepts are simpler

Suppose that a test for a disease generates the following results:

Naively, one might think that only 5% of positive test results are false, but that is quite wrong, as we shall see.

Suppose that only 0.1% of the population has that disease, so that a randomly selected patient has a 0.001 prior probability of having the disease.

We can use Bayes' theorem to calculate the probability that a positive test result is a false positive.

On the other hand, false negatives result when a test falsely or incorrectly reports a negative result. For example, a medical test for a disease may return a negative result indicating that patient does not have a disease even though the patient actually has the disease. We can also use Bayes' theorem to calculate the probability of a false negative. In the first example above,

The probability that a negative result is a false negative is about 0.0000105 or 0.00105%. When a disease is rare, false negatives will not be a major problem with the test.

Measuring a classifier with sensitivity and specificity

In training a classifier, one may wish to measure its performance using the well-accepted metrics of sensitivity and specificity. It may be instructive to compare the classifier to a random classifier that flips a coin based on the prevalence of a disease. Suppose that the probability a person has the disease is

and the probability that they do not is

. Suppose then that we have a random classifier that guesses that the patient has the disease with that same probability

and guesses that he does not with the same probability

. With similar reasoning, the probability of a false negative is

. From the definitions above, the sensitivity of this classifier is

. With more similar reasoning, we can calculate the specificity as

The extension of this concept to non-binary classifications yields the confusion matrix.