A stereographic projection of a Clifford torus performing a simple rotation 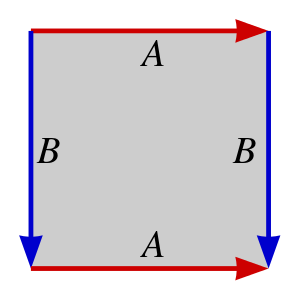 Topologically a rectangle is the fundamental polygon of a torus, with opposite edges sewn together.

The Clifford torus is also known as a square torus, because it is isometric to a square with side length 2π and with opposite sides identified. It is further known as a Euclidean 2-torus (the "2" is its topological dimension); figures drawn on it obey Euclidean geometry as if it were flat, whereas the surface of a common "doughnut"-shaped torus is positively curved on the outer rim and negatively curved on the inner. The Clifford torus cannot exist in Euclidean three-dimensional space.[1]

The unit circle S1 in R2 can be parameterized by an angle coordinate:

Then the Clifford torus is

It is also common to consider the Clifford torus as an embedded torus in C2. In two copies of C, we have the following unit circles (still parametrized by an angle coordinate):

Now the Clifford torus appears as

As before, this is an embedded submanifold, in this case of C2.

If C2 is given by coordinates (z1, z2), then the Clifford torus is given by

Instead of defining the Clifford torus as the product of two unit circles, it is also common to use two circles of radius 1/√2. (For example, Paul Norbury uses this convention when describing the Lawson Conjecture.[2]) With the alternate radius of 1/√2, the Clifford torus instead sits in the unit 3-sphere S3.

Since O(4) acts on R4 by orthogonal transformations, we can move the "standard" Clifford torus defined above to other equivalent tori via rigid rotations. The six-dimensional group O(4) acts transitively on the space of all such Clifford tori sitting inside the 3-sphere. However, this action has a two-dimensional stabilizer (see group action) since rotation in the meridional and longitudinal directions of a torus preserves the torus (as opposed to moving it to a different torus). Hence, there is actually a four-dimensional space of Clifford tori.[2]

In symplectic geometry, the Clifford torus gives an example of an embedded Lagrangian submanifold of C2 with the standard symplectic structure. (Of course, any product of embedded circles in C gives a Lagrangian torus of C2, so these need not be Clifford tori.)

The Lawson conjecture states that every minimally embedded torus in the 3-sphere with the round metric must be a Clifford torus. This conjecture was proved by Simon Brendle in 2012.