In topology and related branches of mathematics, a connected space is a topological space that cannot be represented as the union of two or more disjoint nonempty open subsets. Connectedness is one of the principal topological properties that is used to distinguish topological spaces. A stronger notion is that of a path-connected space, which is a space where any two points can be joined by a path.

An example of a space that is not connected is a plane with an infinite line deleted from it. Other examples of disconnected spaces (that is, spaces which are not connected) include the plane with a closed annulus removed, as well as the union of two disjoint open disks in two-dimensional Euclidean space.

For a topological space X the following conditions are equivalent:

The maximal connected subsets (ordered by inclusion) of a nonempty topological space are called the connected components of the space. The components of any topological space X form a partition of X: they are disjoint, nonempty, and their union is the whole space. Every component is a closed subset of the original space. It follows that, in the case where their number is finite, each component is also an open subset. However, if their number is infinite, this might not be the case; for instance, the connected components of the set of the rational numbers are the one-point sets, which are not open.

be the connected component of x in a topological space X, and

be the intersection of all open-closed sets containing x (called quasi-component of x.) Then

where the equality holds if X is compact Hausdorff or locally connected.

This subspace of R² is path-connected, because a path can be drawn between any two points in the space.

A path from a point x to a point y in a topological space X is a continuous function f from the unit interval [0,1] to X with f(0) = x and f(1) = y. A path-component of X is an equivalence class of X under the equivalence relation which makes x equivalent to y if there is a path from x to y. The space X is said to be path-connected (or pathwise connected or 0-connected) if there is at most one path-component, i.e. if there is a path joining any two points in X. Again, many authors exclude the empty space.

A space X is said to be arc-connected or arcwise connected if any two distinct points can be joined by an arc, that is a path f which is a homeomorphism between the unit interval [0, 1] and its image f([0, 1]). It can be shown any Hausdorff space which is path-connected is also arc-connected. An example of a space which is path-connected but not arc-connected is provided by adding a second copy 0' of 0 to the nonnegative real numbers [0, ∞). One endows this set with a partial order by specifying that 0'<a for any positive number a, but leaving 0 and 0' incomparable. One then endows this set with the order topology, that is one takes the open intervals (a, b) = {x | a < x < b} and the half-open intervals [0, a) = {x | 0 ≤ x < a}, [0', a) = {x | 0' ≤ x < a} as a base for the topology. The resulting space is a T1 space but not a Hausdorff space. Clearly 0 and 0' can be connected by a path but not by an arc in this space. 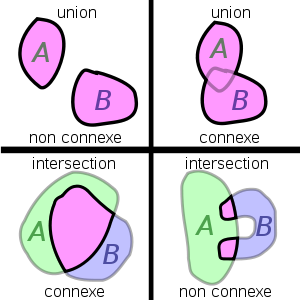 Examples of unions and intersections of connected sets

The intersection of connected sets is not necessarily connected. 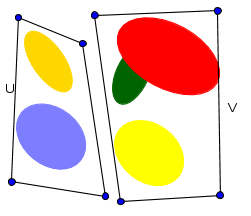 Each ellipse is a connected set, but the union is not connected, since it can be partitioned to two disjoint open sets U and V.

The union of connected sets is not necessarily connected. Consider a collection

of connected sets whose union is

is a separation of

disjoint and open in

must be entirely contained in either

(which are disjoint and open in

) would be a separation of

, contradicting the assumption that it is connected.

This means that, if the union

is disconnected, then the collection

(see picture). This implies that in several cases, a union of connected sets is necessarily connected. In particular:

Two connected sets whose difference is not connected

The set difference of connected sets is not necessarily connected. However, if X⊇Y and their difference X\Y is disconnected (and thus can be written as a union of two open sets X1 and X2), then the union of Y with each such component is connected (i.e. Y∪Xi is connected for all i). Proof:[4] By contradiction, suppose Y∪X1 is not connected. So it can be written as the union of two disjoint open sets, e.g. Y∪X1 = Z1∪Z2. Because Y is connected, it must be entirely contained in one of these components, say Z1, and thus Z2 is contained in X1. Now we know that:

The two sets in the last union are disjoint and open in X, so there is a separation of X, contradicting the fact that X is connected.

Graphs have path connected subsets, namely those subsets for which every pair of points has a path of edges joining them. But it is not always possible to find a topology on the set of points which induces the same connected sets. The 5-cycle graph (and any n-cycle with n>3 odd) is one such example.

There are stronger forms of connectedness for topological spaces, for instance: