In chemistry, crystallography and materials science the coordination number of a central atom in a molecule or crystal is the number of its near neighbours. This number is determined somewhat differently for molecules than for crystals.

However the solid-state structures of crystals often have less clearly defined bonds, and in these cases a count of neighbouring atoms is employed. The simplest method is one used in materials science. The usual value of the coordination number for a given structure refers to an atom in the interior of a crystal lattice with neighbours in all directions. In contexts where crystal surfaces are important, such as materials science and heterogeneous catalysis, the value for an interior atom is the bulk coordination number, while the value for an atom at a surface of the crystal is the surface coordination number.{{ safesubst:#invoke:Unsubst||date=__DATE__ |$B= {{#invoke:Category handler|main}}{{#invoke:Category handler|main}}[citation needed] }}

In chemistry, coordination number (c.n.), defined originally in 1893 by Alfred Werner, is the total number of neighbours of a central atom in a molecule or ion.[1][2] Although a carbon atom has four chemical bonds in most stable molecules, the coordination number of each carbon is four in methane (CH4), three in ethylene (H2C=CH2, each C is bonded to 2H + 1C = 3 atoms), and two in acetylene (HC≡CH). In effect we count the first bond (or sigma bond) to each neighbouring atom, but not the other bonds (pi bonds).

In coordination complexes, only the first or sigma bond between each ligand and the central atom counts, but not any pi bonds to the same ligands. In tungsten hexacarbonyl, W(CO)6, the coordination number of tungsten (W) is counted as six although pi as well as sigma bonding is important in such metal carbonyls.

Examples of high coordination number complexes are the ions formed by uranium and thorium with bidentate nitrate ion ligands, U(NO3)62− and Th(NO3)62−. Here each nitrate ligand is bound to the metal by two oxygen atoms, so that the total coordination number of the U or Th atom is 12.

When the surrounding ligands are smaller than the central atom, even higher coordination numbers may be possible. One computational chemistry study predicted a particularly stable PbHe152+ ion composed of a central lead ion coordinated with no fewer than 15 helium atoms.[3]

For π-electron ligands such as the cyclopentadienide ion [C5H5]–, alkenes and the cyclooctatetraenide ion [C8H8]2–, the number of atoms in the π-electron system that bind to the central atom is termed the hapticity.[4] In ferrocene the hapticity, η, of each cyclopentadienide anion is five, Fe(η5-C5H5)2. There are various ways of assigning the contribution made to the coordination number of the central iron atom by each cyclopentadienide ligand. The contribution could be assigned as one since there is one ligand, or as five since there are five neighbouring atoms, or as three since there are three electron pairs involved. Normally the count of electron pairs is taken.[5]

α-aluminium has a regular cubic close packed structure, fcc, where each aluminium atom has 12 nearest neighbors, 6 in the same plane and 3 above and below and the coordination polyhedron is a cuboctahedron. α-iron has a body centered cubic structure where each iron atom has 8 nearest neighbors situated at the corners of a cube.

Many chemical compounds have distorted structures. Nickel arsenide, NiAs has a structure where nickel and arsenic atoms are 6 coordinate. Unlike sodium chloride where the chloride ions are cubic close packed, the arsenic anions are hexagonal close packed. The nickel ions are 6 coordinate with a distorted octahedral coordination polyhedron where columns of octahedra share opposite faces. The arsenic ions are not octahedrally coordinated but have a trigonal prismatic coordination polyhedron. A consequence of this arrangement is that the nickel atoms are rather close to each other. Other compounds that share this structure, or a closely related one are some transition metal sulfides such as FeS and CoS, as well as some intermetallics. In cobalt telluride, CoTe, the six tellurium and two cobalt Co atoms are all equidistant from the central Co atom.[7]

Two other examples of commonly encountered chemicals are Fe2O3 and TiO2. Fe2O3 has a crystal structure that can be described as having a near close packed array of oxygen atoms with iron atoms filling two thirds of the octahedral holes. However each iron atom has 3 nearest neighbors and 3 others a little further away. The structure is quite complex, the oxygen atoms are coordinated to four iron atoms and the iron atoms in turn share vertices, edges and faces of the distorted octahedra.[7] TiO2 has the rutile structure. The titanium atoms 6 coordinate, 2 atoms at 198.3 pm and 4 at 194.6 pm, in a slightly distorted octahedron. The octahedra around the titanium atoms share edges and vertices to form a 3-D network. The oxide ions are 3 coordinate in a trigonal planar configuration.[11]

Usage in quasicrystal, liquid and other disordered systems 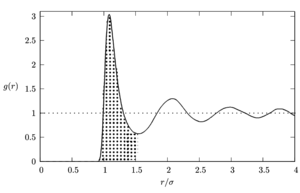 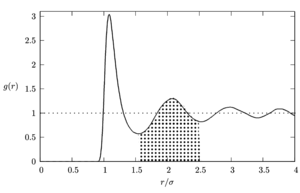 The coordination number of systems with disorder cannot be precisely defined.

is the rightmost position starting from

is the first minimum. Therefore, it is the area under the first peak of

Alternative definitions for the coordination number can be found in literature, but in essence the main idea is the same. One of those definition are as follows: Denote

as the position of the first peak,

The first coordination shell is the spherical shell with radius between

around the central particle under investigation.