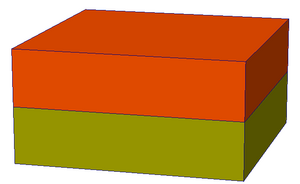 A trivial example of a Corner-point grid with only two cells.

In geometry, a corner-point grid is a tessellation an Euclidean 3D volume where the base cell has 6 faces (hexahedron).

Each cell can be identified by integer coordinates

coordinate runs along the pillars, and

span each layer. The cells are ordered naturally, where the index

runs the fastest and

In the special case of all pillars being vertical, the top and bottom face of each corner-point cell are described by bilinear surfaces and the side faces are planes.

Corner-point grids are supported by most reservoir simulation software, and has become an industry standard.

A main feature of the format is the ability to define erosion surfaces in geological modelling, effectively done by collapsing nodes along each pillar. This means that the corner-point cells degenerate and may have less than 6 faces.

For the corner-point grids non-neighboring connections are supported, meaning that grid cells that are not neighboring in ijk-space can be defined as neighboring. This feature allows for representation of faults with significant throw/displacement. Moreover, the neighboring grid cells do not need to have matching cell faces (just overlap).