Coulomb's law, or Coulomb's inverse-square law, is a law of physics describing the electrostatic interaction between electrically charged particles. The law was first published in 1785 by French physicist Charles Augustin de Coulomb and was essential to the development of the theory of electromagnetism. It is analogous to Isaac Newton's inverse-square law of universal gravitation. Coulomb's law can be used to derive Gauss's law, and vice versa. The law has been tested heavily, and all observations have upheld the law's principle.

Ancient cultures around the Mediterranean knew that certain objects, such as rods of amber, could be rubbed with cat's fur to attract light objects like feathers. Thales of Miletus made a series of observations on static electricity around 600 BC, from which he believed that friction rendered amber magnetic, in contrast to minerals such as magnetite, which needed no rubbing.[1][2] Thales was incorrect in believing the attraction was due to a magnetic effect, but later science would prove a link between magnetism and electricity. Electricity would remain little more than an intellectual curiosity for millennia until 1600, when the English scientist William Gilbert made a careful study of electricity and magnetism, distinguishing the lodestone effect from static electricity produced by rubbing amber.[1] He coined the New Latin word electricus ("of amber" or "like amber", from ήλεκτρον [elektron], the Greek word for "amber") to refer to the property of attracting small objects after being rubbed.[3] This association gave rise to the English words "electric" and "electricity", which made their first appearance in print in Thomas Browne's Pseudodoxia Epidemica of 1646.[4]

Early investigators of the 18th century who suspected that the electrical force diminished with distance as the force of gravity did (i.e., as the inverse square of the distance) included Daniel Bernoulli[5] and Alessandro Volta, both of whom measured the force between plates of a capacitor, and Franz Aepinus who supposed the inverse-square law in 1758.[6]

Based on experiments with electrically charged spheres, Joseph Priestley of England was among the first to propose that electrical force followed an inverse-square law, similar to Newton's law of universal gravitation. However, he did not generalize or elaborate on this.[7] In 1767, he conjectured that the force between charges varied as the inverse square of the distance.[8][9] 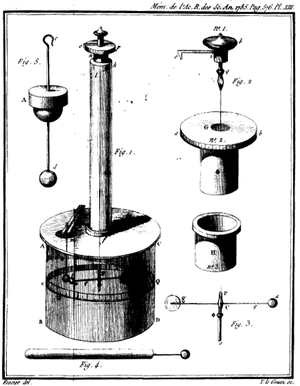 In 1769, Scottish physicist John Robison announced that, according to his measurements, the force of repulsion between two spheres with charges of the same sign varied as x-2.06.[10]

In the early 1770s, the dependence of the force between charged bodies upon both distance and charge had already been discovered, but not published, by Henry Cavendish of England.[11]

Finally, in 1785, the French physicist Charles-Augustin de Coulomb published his first three reports of electricity and magnetism where he stated his law. This publication was essential to the development of the theory of electromagnetism.[12] He used a torsion balance to study the repulsion and attraction forces of charged particles, and determined that the magnitude of the electric force between two point charges is directly proportional to the product of the charges and inversely proportional to the square of the distance between them.

The torsion balance consists of a bar suspended from its middle by a thin fiber. The fiber acts as a very weak torsion spring. In Coulomb's experiment, the torsion balance was an insulating rod with a metal-coated ball attached to one end, suspended by a silk thread. The ball was charged with a known charge of static electricity, and a second charged ball of the same polarity was brought near it. The two charged balls repelled one another, twisting the fiber through a certain angle, which could be read from a scale on the instrument. By knowing how much force it took to twist the fiber through a given angle, Coulomb was able to calculate the force between the balls and derive his inverse-square proportionality law.

are the signed magnitudes of the charges, the scalar

is the distance between the charges, the vector

is the vectorial distance between the charges, and

(a unit vector pointing from

). The vector form of the equation calculates the force

is used instead, then the effect on

can be found. It can be also calculated using Newton's third law:

Electromagnetic theory is usually expressed using the standard SI units. Force is measured in newtons, charge in coulombs, and distance in metres. Coulomb's constant is given by

is the relative permittivity of the material in which the charges are immersed, and is dimensionless.

The SI derived units for the electric field are volts per meter, newtons per coulomb, or tesla meters per second.

Coulomb's law and Coulomb's constant can also be interpreted in various terms:

An electric field is a vector field that associates to each point in space the Coulomb force experienced by a test charge. In the simplest case, the field is considered to be generated solely by a single source point charge. The strength and direction of the Coulomb force

on a test charge

depends on the electric field

that it finds itself in, such that

. If the field is generated by a positive source point charge

, the direction of the electric field points along lines directed radially outwards from it, i.e. in the direction that a positive point test charge

would move if placed in the field. For a negative point source charge, the direction is radially inwards.

The magnitude of the electric field

at a certain distance from it

in vacuum is given by:

Coulomb's constant is a proportionality factor that appears in Coulomb's law as well as in other electric-related formulas. Denoted

, it is also called the electric force constant or electrostatic constant, hence the subscript

The exact value of Coulomb's constant is:

There are two conditions to be fulfilled for the validity of Coulomb’s law: 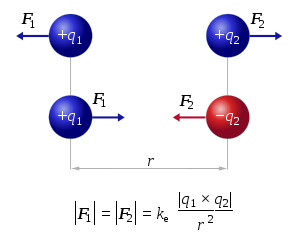 The absolute value of the force

relates to the distance between the point charges and to the simple product of their charges. The diagram shows that like charges repel each other, and opposite charges attract each other.

is the separation distance and

is Coulomb's constant. If the product

In the image, the vector

is the force experienced by

is the force experienced by

the forces are repulsive (as in the image) and when

the forces are attractive (opposite to the image). The magnitude of the forces will always be equal.

experienced by a charge,

, in the vicinity of another charge,

is the electric constant.

The vector form of Coulomb's law is simply the scalar definition of the law with the direction given by the unit vector,

, parallel with the line from charge

is positive and the direction of the force on

is negative and the direction of the force on

; the charges attract each other.

, according to Newton's third law, is

on a small charge,

, due to a system of

discrete charges in vacuum is:

are the magnitude and position respectively of the

is a unit vector in the direction of

(a vector pointing from charges

In this case, the principle of linear superposition is also used. For a continuous charge distribution, an integral over the region containing the charge is equivalent to an infinite summation, treating each infinitesimal element of space as a point charge

. The distribution of charge is usually linear, surface or volumetric.

gives the charge per unit length at position

is an infinitesimal element of length,

gives the charge per unit area at position

is an infinitesimal element of area,

gives the charge per unit volume at position

is an infinitesimal element of volume,

The force on a small test charge

in vacuum is given by the integral over the distribution of charge: 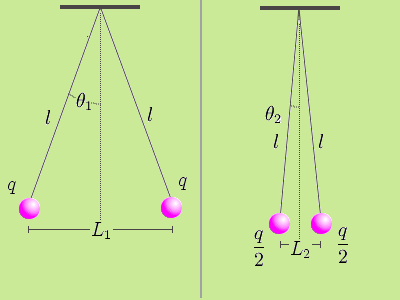 It is possible to verify Coulomb's law with a simple experiment. Let's consider two small spheres of mass

, hanging from two ropes of negligible mass of length

. The forces acting on each sphere are three: the weight

and the electric force

In the equilibrium state: Template:NumBlk

, assuming Coulomb's law is correct, is equal to Template:NumBlk

If we now discharge one of the spheres, and we put it in contact with the charged sphere, each one of them acquires a charge q/2. In the equilibrium state, the distance between the charges will be

and the repulsion force between them will be: Template:NumBlk

and the distance between the charges

is sufficient to verify that the equality is true taking into account the experimental error. In practice, angles can be difficult to measure, so if the length of the ropes is sufficiently great, the angles will be small enough to make the following approximation: Template:NumBlk

Using this approximation, the relationship (Template:EquationNote) becomes the much simpler expression: Template:NumBlk

In this way, the verification is limited to measuring the distance between the charges and check that the division approximates the theoretical value.

In late 2012, experimenters of the Istituto Nazionale di Fisica Nucleare, at the Laboratori Nazionali di Frascati in Frascati, Rome performed an experiment which indicated that there was no delay in propagation of the force between a beam of electrons and detectors.[16] This was taken as indicating that the field seemed to travel with the beam of electrons as if it were a rigid structure preceding the beam. Though awaiting corroboration, the results indicate that aberration is not present in the Coulomb force. The experiment, which was repeated in 2014, confirmed the results from 2012.

In either formulation, Coulomb’s law is fully accurate only when the objects are stationary, and remains approximately correct only for slow movement. These conditions are collectively known as the electrostatic approximation. When movement takes place, magnetic fields that alter the force on the two objects are produced. The magnetic interaction between moving charges may be thought of as a manifestation of the force from the electrostatic field but with Einstein’s theory of relativity taken into consideration. Other theories like Weber electrodynamics predict other velocity-dependent corrections to Coulomb's law.

Coulomb's law holds even within atoms, correctly describing the force between the positively charged atomic nucleus and each of the negatively charged electrons. This simple law also correctly accounts for the forces that bind atoms together to form molecules and for the forces that bind atoms and molecules together to form solids and liquids. Generally, as the distance between ions increases, the energy of attraction approaches zero and ionic bonding is less favorable. As the magnitude of opposing charges increases, energy increases and ionic bonding is more favorable.