The Critical State concept is an idealization of the observed behavior of saturated remoulded clays in triaxial compression tests, and it is assumed to apply to undisturbed soils. It states that soils and other granular materials, if continuously distorted (sheared) until they flow as a frictional fluid, will come into a well-defined critical state. At the onset of the critical state, shear distortions

occur without any further changes in mean effective stress

, in uniaxial tension according to the von Mises yielding criterion), or specific volume

However, for triaxial conditions

All critical states, for a given soil, form a unique line called the Critical State Line (CSL) defined by the following equations in the space

are soil constants. The first equation determines the magnitude of the deviatoric stress

) and the mean effective stress

. The second equation states that the specific volume

occupied by unit volume of flowing particles will decrease as the logarithm of the mean effective stress increases.

In an attempt to advance soil testing techniques, Kenneth Harry Roscoe of Cambridge University, in the late forties and early fifties, developed a simple shear apparatus in which his successive students attempted to study the changes in conditions in the shear zone both in sand and in clay soils. In 1958 a study of the yielding of soil based on some Cambridge data of the simple shear apparatus tests, and on much more extensive data of triaxial tests at Imperial College London from research led by Professor Sir Alec Skempton at the Imperial Geotechnical Laboratories, led to the publication of the critical state concept Template:Harv.

Roscoe obtained his undergraduate degree in mechanical engineering[1] and his experiences trying to create tunnels to escape when held as a prisoner of war by the Nazis during WWII introduced him to soil mechanics.[1] Subsequent to this 1958 paper, concepts of plasticity were introduced by Schofield and publa classic text book Template:Harv. Schofield was taught at Cambridge by Prof. John Baker, a structural engineer who was a strong believer in designing structures that would fail "plastically". Prof. Baker's theories strongly influenced Schofield's thinking on soil shear. Prof. Baker's views were developed from his pre-war work on steel structures and further informed by his wartime experiences assessing blast-damaged structures and with the design of the "Morrison Shelter", an air-raid shelter which could be located indoors Template:Harv.

The Original Cam-Clay model is based on the assumption that the soil is isotropic, elasto-plastic, deforms as a continuum, and it is not affected by creep. The yield surface of the Cam clay model is described by the equation

is the equivalent stress,

is the pre-consolidation pressure, and

is the slope of the critical state line in

The pre-consolidation pressure evolves as the void ratio (

) (and therefore the specific volume

) of the soil changes. A commonly used relation is

is the virgin compression index of the soil. A limitation of this model is the possibility of negative specific volumes at realistic values of stress.

An improvement to the above model for

is the appropriate compressibility index of the soil. 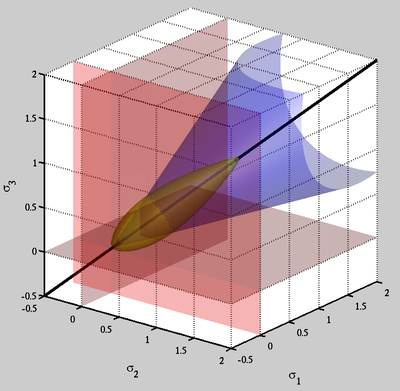 Professor John Burland of Imperial College who worked with Professor Roscoe is credited with the development of the modified version of the original model. The difference between the Cam Clay and the Modified Cam Clay [2] (MCC) is that the yield surface of the MCC is described by an ellipse and therefore the plastic strain increment vector (which is perpendicular to the yield surface) for the largest value of the mean effective stress is horizontal, and hence no incremental deviatoric plastic strain takes place for a change in mean effective stress (for purely hydrostatic states of stress). This is very convenient for constitutive modelling in numerical analysis, especially finite element analysis, where numerical stability issues are important (as a curve needs to be continuous in order to be differentiable).

is the equivalent stress,

is the pre-consolidation pressure, and

is the slope of the critical state line. 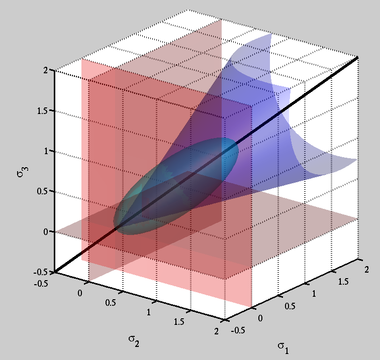