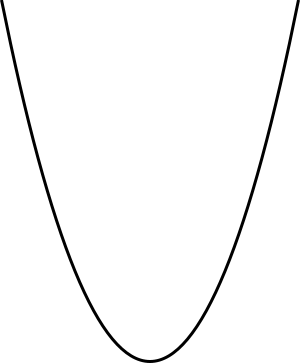 A parabola, a simple example of a curve

In mathematics, a curve (also called a curved line in older texts) is, generally speaking, an object similar to a line but which is not required to be straight. This entails that a line is a special case of curve, namely a curve with null curvature.Template:Efn Often curves in two-dimensional (plane curves) or three-dimensional (space curves) Euclidean space are of interest.

Various disciplines within mathematics have given the term different meanings depending on the area of study, so the precise meaning depends on context. However many of these meanings are special instances of the definition which follows. A curve is a topological space which is locally homeomorphic to a line. In everyday language, this means that a curve is a set of points which, near each of its points, looks like a line, up to a deformation. A simple example of a curve is the parabola, shown to the right. A large number of other curves have been studied in multiple mathematical fields.

Closely related meanings are "graph of a function" (as in "Phillips curve") and "two-dimensional or three-dimensional graph without a kink".

In non-mathematical language, the term is often used metaphorically, as in "learning curve".

An arc or segment of a curve is a part of a curve that is bounded by two distinct end points and contains every point on the curve between its end points. Depending on how the arc is defined, either of the two end points may or may not be part of it. When the arc is straight, it is typically called a line segment. 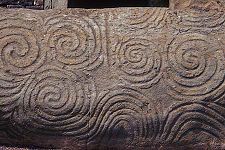 Megalithic art from Newgrange showing an early interest in curves

Fascination with curves began long before they were the subject of mathematical study. This can be seen in numerous examples of their decorative use in art and on everyday objects dating back to prehistoric times.[1] Curves, or at least their graphical representations, are simple to create, for example by a stick in the sand on a beach.

Historically, the term "line" was used in place of the more modern term "curve". Hence the phrases "straight line" and "right line" were used to distinguish what are today called lines from "curved lines". For example, in Book I of Euclid's Elements, a line is defined as a "breadthless length" (Def. 2), while a straight line is defined as "a line that lies evenly with the points on itself" (Def. 4). Euclid's idea of a line is perhaps clarified by the statement "The extremities of a line are points," (Def. 3).[2] Later commentators further classified lines according to various schemes. For example:[3]

The curves created by slicing a cone (conic sections) were among the curves studied in ancient Greece.

The Greek geometers had studied many other kinds of curves. One reason was their interest in solving geometrical problems that could not be solved using standard compass and straightedge construction. These curves include:

Analytic geometry allowed curves, such as the Folium of Descartes, to be defined using equations instead of geometrical construction.

A fundamental advance in the theory of curves was the advent of analytic geometry in the seventeenth century. This enabled a curve to be described using an equation rather than an elaborate geometrical construction. This not only allowed new curves to be defined and studied, but it enabled a formal distinction to be made between curves that can be defined using algebraic equations, algebraic curves, and those that cannot, transcendental curves. Previously, curves had been described as "geometrical" or "mechanical" according to how they were, or supposedly could be, generated.[1]

Conic sections were applied in astronomy by Kepler. Newton also worked on an early example in the calculus of variations. Solutions to variational problems, such as the brachistochrone and tautochrone questions, introduced properties of curves in new ways (in this case, the cycloid). The catenary gets its name as the solution to the problem of a hanging chain, the sort of question that became routinely accessible by means of differential calculus.

In the eighteenth century came the beginnings of the theory of plane algebraic curves, in general. Newton had studied the cubic curves, in the general description of the real points into 'ovals'. The statement of Bézout's theorem showed a number of aspects which were not directly accessible to the geometry of the time, to do with singular points and complex solutions.

From the nineteenth century there is not a separate curve theory, but rather the appearance of curves as the one-dimensional aspect of projective geometry, and differential geometry; and later topology, when for example the Jordan curve theorem was understood to lie quite deep, as well as being required in complex analysis. The era of the space-filling curves finally provoked the modern definitions of curve.

Boundaries of hyperbolic components of Mandelbrot set as closed curves

In topology, a curve is defined as follows. Let

be an interval of real numbers (i.e. a non-empty connected subset of

is a continuous mapping

is a topological space.

In other words this curve "does not cross itself and has no missing points".[7]

This definition of curve captures our intuitive notion of a curve as a connected, continuous geometric figure that is "like" a line, without thickness and drawn without interruption, although it also includes figures that can hardly be called curves in common usage. For example, the image of a curve can cover a square in the plane (space-filling curve). The image of simple plane curve can have Hausdorff dimension bigger than one (see Koch snowflake) and even positive Lebesgue measure[8] (the last example can be obtained by small variation of the Peano curve construction). The dragon curve is another unusual example.

The distinction between a curve and its image is important. Two distinct curves may have the same image. For example, a line segment can be traced out at different speeds, or a circle can be traversed a different number of times. Many times, however, we are just interested in the image of the curve. It is important to pay attention to context and convention in reading.

is a metric space with metric

, then we can define the length of a curve

where the sup is over all

A Template:Visible anchor is a curve with finite length. A parametrization of

is a Lipschitz-continuous function, then it is automatically rectifiable. Moreover, in this case, one can define the speed (or metric derivative) of

is an Euclidean space and

{{#invoke:main|main}} While the first examples of curves that are met are mostly plane curves (that is, in everyday words, curved lines in two-dimensional space), there are obvious examples such as the helix which exist naturally in three dimensions. The needs of geometry, and also for example classical mechanics are to have a notion of curve in space of any number of dimensions. In general relativity, a world line is a curve in spacetime.

. This general idea is enough to cover many of the applications of curves in mathematics. From a local point of view one can take

to be Euclidean space. On the other hand it is useful to be more general, in that (for example) it is possible to define the tangent vectors to

by means of this notion of curve.

is a smooth manifold, a smooth curve in

is a smooth map

This is a basic notion. There are less and more restricted ideas, too. If

manifold (i.e., a manifold whose charts are

times continuously differentiable), then a

is such a curve which is only assumed to be

is an analytic manifold (i.e. infinitely differentiable and charts are expressible as power series), and

is an analytic map, then

is said to be an analytic curve.

A differentiable curve is said to be regular if its derivative never vanishes. (In words, a regular curve never slows to a stop or backtracks on itself.) Two

are said to be equivalent if there is a bijective

such that the inverse map

is called a reparametrisation of

; and this makes an equivalence relation on the set of all

arc is an equivalence class of

curves under the relation of reparametrisation.

Algebraic curves can also be space curves, or curves in even higher dimension, obtained as the intersection (common solution set) of more than one polynomial equation in more than two variables. By eliminating variables (by any tool of elimination theory), an algebraic curve may be projected onto a plane algebraic curve, which however may introduce singularities such as cusps or double points.

A plane curve may also be completed in a curve in the projective plane: if a curve is defined by a polynomial f of total degree d, then wdf(u/w, v/w) simplifies to a homogeneous polynomial g(u, v, w) of degree d. The values of u, v, w such that g(u, v, w) = 0 are the homogeneous coordinates of the points of the completion of the curve in the projective plane and the points of the initial curve are those such w is not zero. An example is the Fermat curve un + vn = wn, which has an affine form xn + yn = 1. A similar process of homogenization may be defined for curves in higher dimensional spaces