Fitting of a noisy curve by an asymmetrical peak model, with an iterative process (Gauss–Newton algorithm with variable damping factor α).
Top: raw data and model.
Bottom: evolution of the normalised sum of the squares of the errors.

Curve fitting[1][2] is the process of constructing a curve, or mathematical function, that has the best fit to a series of data points,[3] possibly subject to constraints.[4][5] Curve fitting can involve either interpolation,[6][7] where an exact fit to the data is required, or smoothing,[8][9] in which a "smooth" function is constructed that approximately fits the data. A related topic is regression analysis,[10][11] which focuses more on questions of statistical inference such as how much uncertainty is present in a curve that is fit to data observed with random errors. Fitted curves can be used as an aid for data visualization,[12][13] to infer values of a function where no data are available,[14] and to summarize the relationships among two or more variables.[15] Extrapolation refers to the use of a fitted curve beyond the range of the observed data,[16] and is subject to a degree of uncertainty[17] since it may reflect the method used to construct the curve as much as it reflects the observed data.

This is a line with slope a. A line will connect any two points, so a first degree polynomial equation is an exact fit through any two points with distinct x coordinates.

If the order of the equation is increased to a second degree polynomial, the following results:

This will exactly fit a simple curve to three points.

If the order of the equation is increased to a third degree polynomial, the following is obtained:

This will exactly fit four points.

A more general statement would be to say it will exactly fit four constraints. Each constraint can be a point, angle, or curvature (which is the reciprocal of the radius of an osculating circle). Angle and curvature constraints are most often added to the ends of a curve, and in such cases are called end conditions. Identical end conditions are frequently used to ensure a smooth transition between polynomial curves contained within a single spline. Higher-order constraints, such as "the change in the rate of curvature", could also be added. This, for example, would be useful in highway cloverleaf design to understand the rate of change of the forces applied to a car (see jerk), as it follows the cloverleaf, and to set reasonable speed limits, accordingly.

If there are more than n + 1 constraints (n being the degree of the polynomial), the polynomial curve can still be run through those constraints. An exact fit to all constraints is not certain (but might happen, for example, in the case of a first degree polynomial exactly fitting three collinear points). In general, however, some method is then needed to evaluate each approximation. The least squares method is one way to compare the deviations.

There are several reasons given to get an approximate fit when it is possible to simply increase the degree of the polynomial equation and get an exact match.:

The degree of the polynomial curve being higher than needed for an exact fit is undesirable for all the reasons listed previously for high order polynomials, but also leads to a case where there are an infinite number of solutions. For example, a first degree polynomial (a line) constrained by only a single point, instead of the usual two, would give an infinite number of solutions. This brings up the problem of how to compare and choose just one solution, which can be a problem for software and for humans, as well. For this reason, it is usually best to choose as low a degree as possible for an exact match on all constraints, and perhaps an even lower degree, if an approximate fit is acceptable.

Fitting other curves to data points

Other types of curves, such as conic sections (circular, elliptical, parabolic, and hyperbolic arcs) or trigonometric functions (such as sine and cosine), may also be used, in certain cases. For example, trajectories of objects under the influence of gravity follow a parabolic path, when air resistance is ignored. Hence, matching trajectory data points to a parabolic curve would make sense. Tides follow sinusoidal patterns, hence tidal data points should be matched to a sine wave, or the sum of two sine waves of different periods, if the effects of the Moon and Sun are both considered.

In spectroscopy, curves may be fitted with Gaussian, Lorentzian, Voigt and related functions.

For algebraic analysis of data, "fitting" usually means trying to find the curve that minimizes the vertical (y-axis) displacement of a point from the curve (e.g., ordinary least squares). However for graphical and image applications geometric fitting seeks to provide the best visual fit; which usually means trying to minimize the orthogonal distance to the curve (e.g., total least squares), or to otherwise include both axes of displacement of a point from the curve. Geometric fits are not popular because they usually require non-linear and/or iterative calculations, although they have the advantage of a more aesthetic and geometrically accurate result.[18][19][20]

Fitting a circle by geometric fit 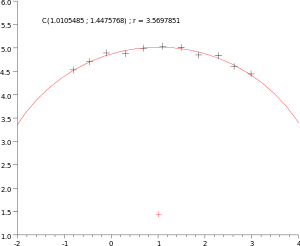 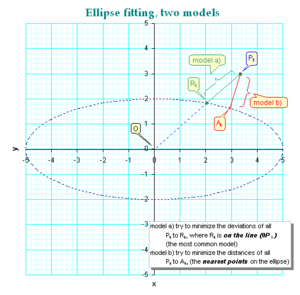 Coope[21] approaches the problem of trying to find the best visual fit of circle to a set of 2D data points. The method elegantly transforms the ordinarily non-linear problem into a linear problem that can be solved without using iterative numerical methods, and is hence an order of magnitude faster than previous techniques.

Fitting an ellipse by geometric fit

The above technique is extended to general ellipses[22] by adding a non-linear step, resulting in a method that is fast, yet finds visually pleasing ellipses of arbitrary orientation and displacement.

Note that while this discussion was in terms of 2D curves, much of this logic also extends to 3D surfaces, each patch of which is defined by a net of curves in two parametric directions, typically called u and v. A surface may be composed of one or more surface patches in each direction.

Many statistical packages such as R and numerical software such as the GNU Scientific Library,Maple, MATLAB, SciPy and OpenOpt include commands for doing curve fitting in a variety of scenarios. There are also programs specifically written to do curve fitting; they can be found in the lists of statistical and numerical analysis programs as well as in Category:Regression and curve fitting software.