A graph with vertices labeled by degree

In graph theory, the degree (or valency) of a vertex of a graph is the number of edges incident to the vertex, with loops counted twice.[1] The degree of a vertex

{{#invoke:main|main}} The degree sum formula states that, given a graph

The formula implies that in any graph, the number of vertices with odd degree is even. This statement (as well as the degree sum formula) is known as the handshaking lemma. The latter name comes from a popular mathematical problem, to prove that in any group of people the number of people who have shaken hands with an odd number of other people from the group is even. 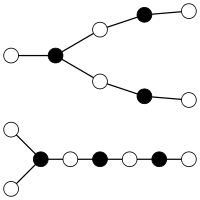