Degree of a continuous mapping 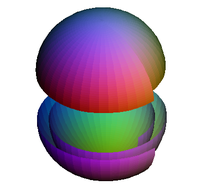 A degree two map of a sphere onto itself.

In topology, the degree of a continuous mapping between two compact oriented manifolds of the same dimension is a number that represents the number of times that the domain manifold wraps around the range manifold under the mapping. The degree is always an integer, but may be positive or negative depending on the orientations.

Definitions of the degree

From Sn to Sn

to itself (in the case

, this is called the winding number):

be a continuous map. Then

must be of the form

is then called the degree of

Let X and Y be closed connected oriented m-dimensional manifolds. Orientability of a manifold implies that its top homology group is isomorphic to Z. Choosing an orientation means choosing a generator of the top homology group.

If y in Y and f −1(y) is a finite set, the degree of f can be computed by considering the m-th local homology groups of X at each point in f −1(y).

In the language of differential topology, the degree of a smooth map can be defined as follows: If f is a smooth map whose domain is a compact manifold and p is a regular value of f, consider the finite set

By p being a regular value, in a neighborhood of each xi the map f is a local diffeomorphism (it is a covering map). Diffeomorphisms can be either orientation preserving or orientation reversing. Let r be the number of points xi at which f is orientation preserving and s be the number at which f is orientation reversing. When the domain of f is connected, the number r − s is independent of the choice of p (though n is not!) and one defines the degree of f to be r − s. This definition coincides with the algebraic topological definition above.

One can also define degree modulo 2 (deg2(f)) the same way as before but taking the fundamental class in Z2 homology. In this case deg2(f) is an element of Z2 (the field with two elements), the manifolds need not be orientable and if n is the number of preimages of p as before then deg2(f) is n modulo 2.

is a bounded region,

a regular value of

is defined by the formula

is the Jacobi matrix of

. This definition of the degree may be naturally extended for non-regular values

is a point close to

The degree satisfies the following properties:[2]

are disjoint parts of

These properties characterise the degree uniquely and the degree may be defined by them in an axiomatic way.

In a similar way, we could define the degree of a map between compact oriented manifolds with boundary.

are homotopic if and only if

In other words, degree is an isomorphism

Moreover, the Hopf theorem states that for any

are homotopic if and only if

is extendable to a map