Alternation of the n-cube yields one of two n-demicubes, as in this 3-dimensional illustration of the two tetrahedra that arise as the 3-demicubes of the 3-cube.

In geometry, demihypercubes (also called n-demicubes, n-hemicubes, and half measure polytopes) are a class of n-polytopes constructed from alternation of an n-hypercube, labeled as hγn for being half of the hypercube family, γn. Half of the vertices are deleted and new facets are formed. The 2n facets become 2n (n-1)-demicubes, and 2n (n-1)-simplex facets are formed in place of the deleted vertices.

They have been named with a demi- prefix to each hypercube name: demicube, demitesseract, etc. The demicube is identical to the regular tetrahedron, and the demitesseract is identical to the regular 16-cell. The demipenteract is considered semiregular for having only regular facets. Higher forms don't have all regular facets but are all uniform polytopes.

The vertices and edges of a demihypercube form two copies of the halved cube graph.

Thorold Gosset described the demipenteract in his 1900 publication listing all of the regular and semiregular figures in n-dimensions above 3. He called it a 5-ic semi-regular. It also exists within the semiregular k21 polytope family.

The demihypercubes can be represented by extended Schläfli symbols of the form h{4,3,...,3} as half the vertices of {4,3,...,3}. The vertex figures of demihypercubes are rectified n-simplexes.

They are represented by Coxeter-Dynkin diagrams of three constructive forms:

H.S.M. Coxeter also labeled the third bifurcating diagrams as 1k1 representing the lengths of the 3 branches and lead by the ringed branch.

An n-demicube, n greater than 2, has n*(n-1)/2 edges meeting at each vertex. The graphs below show less edges at each vertex due to overlapping edges in the symmetry projection.

The symmetry group of the demihypercube is the Coxeter group 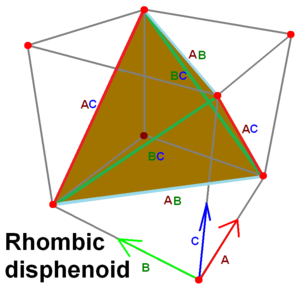 The rhombic disphenoid inside of a cuboid

Constructions as alternated orthotopes have the same topology, but can be stretched with different lengths in n-axes of symmetry.

The rhombic disphenoid is the three-dimensional example as alternated cuboid. It has three sets of edge lengths, and scalene triangle faces.