Distance is a numerical description of how far apart objects are. In physics or everyday usage, distance may refer to a physical length, or an estimation based on other criteria (e.g. "two counties over"). In mathematics, a distance function or metric is a generalization of the concept of physical distance. A metric is a function that behaves according to a specific set of rules, and is a concrete way of describing what it means for elements of some space to be "close to" or "far away from" each other. In most cases, "distance from A to B" is interchangeable with "distance between B and A".

These formula are easily derived by constructing a right triangle with a leg on the hypotenuse of another (with the other leg orthogonal to the plane that contains the 1st triangle) and applying the Pythagorean theorem. In the study of complicated geometries,we call this (most common) type of distance Euclidean distance,as it is derived from the Pythagorean theorem,which does not hold in Non-Euclidean geometries.This distance formula can also be expanded into the arc-length formula.

In the Euclidean space Rn, the distance between two points is usually given by the Euclidean distance (2-norm distance). Other distances, based on other norms, are sometimes used instead.

p need not be an integer, but it cannot be less than 1, because otherwise the triangle inequality does not hold.

The 2-norm distance is the Euclidean distance, a generalization of the Pythagorean theorem to more than two coordinates. It is what would be obtained if the distance between two points were measured with a ruler: the "intuitive" idea of distance.

The 1-norm distance is more colourfully called the taxicab norm or Manhattan distance, because it is the distance a car would drive in a city laid out in square blocks (if there are no one-way streets).

The infinity norm distance is also called Chebyshev distance. In 2D, it is the minimum number of moves kings require to travel between two squares on a chessboard.

The p-norm is rarely used for values of p other than 1, 2, and infinity, but see super ellipse.

In physical space the Euclidean distance is in a way the most natural one, because in this case the length of a rigid body does not change with rotation.

The Euclidean distance between two points in space (

) may be written in a variational form where the distance is the minimum value of an integral:

is the trajectory (path) between the two points. The value of the integral (D) represents the length of this trajectory. The distance is the minimal value of this integral and is obtained when

the integrand has be to modified to

, where Einstein summation convention has been used.

The above double integral is the generalized distance functional between two plymer conformation.

is a spatial parameter and

is pseudo-time. This means that

is the polymer/string conformation at time

and is parameterized along the string length by

. The term with cofactor

is a Lagrange multiplier and its role is to ensure that the length of the polymer remains the same during the transformation. If two discrete polymers are inextensible, then the minimal-distance transformation between them no longer involves purely straight-line motion, even on a Euclidean metric. There is a potential application of such generalized distance to the problem of protein folding[1][2] This generalized distance is analogous to the Nambu-Goto action in string theory, however there is no exact correspondence because the Euclidean distance in 3-space is inequivalent to the space-time distance minimized for the classical relativistic string.

Template:Expand section This is a metric often used in computer vision that can be minimized by least squares estimation. [1][2] For curves or surfaces given by the equation

(such as a conic in homogeneous coordinates), the algebraic distance from the point

to the curve is simply

. It may serve as an "initial guess" for geometric distance to refine estimations of the curve by more accurate methods, such as non-linear least squares.

In mathematics, in particular geometry, a distance function on a given set M is a function d: M×M → R, where R denotes the set of real numbers, that satisfies the following conditions:

Such a distance function is known as a metric. Together with the set, it makes up a metric space.

For example, the usual definition of distance between two real numbers x and y is: d(x,y) = |x − y|. This definition satisfies the three conditions above, and corresponds to the standard topology of the real line. But distance on a given set is a definitional choice. Another possible choice is to define: d(x,y) = 0 if x = y, and 1 otherwise. This also defines a metric, but gives a completely different topology, the "discrete topology"; with this definition numbers cannot be arbitrarily close.

Distances between sets and between a point and a set 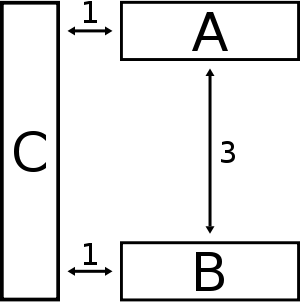 Various distance definitions are possible between objects. For example, between celestial bodies one should not confuse the surface-to-surface distance and the center-to-center distance. If the former is much less than the latter, as for a LEO, the first tends to be quoted (altitude), otherwise, e.g. for the Earth-Moon distance, the latter.

There are two common definitions for the distance between two non-empty subsets of a given set:

This is a symmetric premetric. On a collection of sets of which some touch or overlap each other, it is not "separating", because the distance between two different but touching or overlapping sets is zero. Also it is not hemimetric, i.e., the triangle inequality does not hold, except in special cases. Therefore only in special cases this distance makes a collection of sets a metric space.

In terms of this, the definition of the Hausdorff distance can be simplified: it is the larger of two values, one being the supremum, for a point ranging over one set, of the distance between the point and the set, and the other value being likewise defined but with the roles of the two sets swapped.

In graph theory the distance between two vertices is the length of the shortest path between those vertices.

Distance versus directed distance and displacement 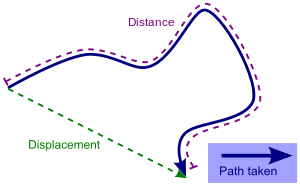 Distance along a path compared with displacement

Directed distances are distances with a directional sense. They can be determined along straight lines and along curved lines. A directed distance of a point C from point A in the direction of B on a line AB in a Euclidean vector space is the distance from A to C if C falls on the ray AB, but is the negative of that distance if C falls on the ray BA (I.e., if C is not on the same side of A as B is).

A directed distance along a curved line is not a vector and is represented by a segment of that curved line defined by endpoints A and B, with some specific information indicating the sense (or direction) of an ideal or real motion from one endpoint of the segment to the other (see figure). For instance, just labelling the two endpoints as A and B can indicate the sense, if the ordered sequence (A, B) is assumed, which implies that A is the starting point.

A displacement (see above) is a special kind of directed distance defined in mechanics. A directed distance is called displacement when it is the distance along a straight line (minimum distance) from A and B, and when A and B are positions occupied by the same particle at two different instants of time. This implies motion of the particle. The distance traveled by a particle must always be greater than or equal to its displacement, with equality occurring only when the particle moves along a straight path.