The dollar or peso sign ($) is a symbol primarily used to indicate the various peso and dollar units of currency around the world.

The sign is first attested in British, American, Canadian, Mexican and other Spanish American business correspondence in the 1770s, referring to the Spanish American peso,[1][2] also known as "Spanish dollar" or "piece of eight" in British North America, which provided the model for the currency that the United States later adopted in 1785 and the larger coins of the new Spanish American republics such as the Mexican peso, Peruvian eight-real and Bolivian eight-sol coins.

The best documented explanation reveals that the sign evolved out of the Spanish and Spanish American scribal abbreviation "ps" for pesos. A study of late eighteenth- and early nineteenth-century manuscripts shows that the s gradually came to be written over the p developing a close equivalent to the "$" mark.[3][4][5][6][7]

There are a number of other theories about the origin of the symbol, some with a measure of academic acceptance, others the symbolic equivalent of false etymologies.[8]

Drawn with one vertical line ($)

One theory is that the dollar sign is derived from a slash through the numeral eight, denoting pieces of eight. The Oxford English Dictionary before 1963 held that this was the most probable explanation, though later editions have placed it in doubt.Template:Fact 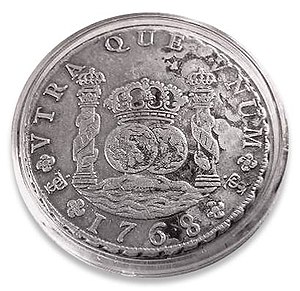 Image of a 1768 Spanish Colonial Real silver coin, showing the PTSI mint mark in the lower right and left quadrants and the Pillars of Hercules surrounding a picture of the world.

Another theory is that the dollar sign was derived from or inspired by the mint mark on the Spanish pieces of eight that were minted in Potosí (in present day Bolivia). The mint mark, composed of the letters "PTSI" superimposed, bears a strong resemblance to the single-stroke dollar sign (see photo). The mark, which appeared on silver coins minted from 1573 to 1825 in Potosí, the largest mint during the colonial period, would have been widely recognized throughout the North American colonies.{{ safesubst:#invoke:Unsubst||date=__DATE__ |$B= {{#invoke:Category handler|main}}{{#invoke:Category handler|main}}[citation needed] }}

Alternatively, the $ symbol derives from the scroll on the pillar, on the reverse of the "pillar dollar" variety of pieces of eight.Template:Fact

Another theory is that the dollar sign may have also originated from Hermes, the Greek god of bankers, thieves, messengers, and tricksters. One of his symbols was the caduceus, a staff from which ribbons or snakes dangled in a sinuous curve.Template:Fact

The dollar sign drawn with two vertical lines is said to come from the Spanish coat of arms which showed the Pillars of Hercules with a banner curling between them(see below).

The Pillars of Hercules with a small "S" shaped ribbon around in the City of Seville, Spain (16th Century).

A common theory holds that it derives from the Spanish coat of arms engraved on the colonial silver coins, the reals, (among them the Spanish dollar) that were in circulation in Spain's colonies in America and Asia. Reals and Spanish dollars were also legal tender in the English colonies in North America, which later became part of the United States and Canada.

In 1492, Ferdinand II of Aragon adopted the symbol of the Pillars of Hercules and added the Latin warning Non plus ultra meaning meaning "nothing further beyond", indicating "this is the end of the (known) world." But when Christopher Columbus came to America, the legend was changed to Plus ultra: meaning "further beyond." 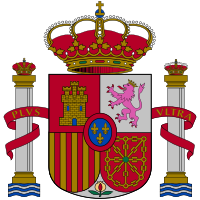 The symbol was adopted by Charles V and was part of his coat of arms representing Spain's American possessions. The symbol was later stamped on coins minted in gold and silver. These coins, depicting the Pillars of Hercules over two hemispheres and a small "S"-shaped ribbon around each, were spread throughout America, Europe and Asia. For the sake of simplicity, traders wrote signs that, instead of saying dollar or peso, had this symbol made by hand, and this in turn evolved into a simple S with two vertical bars.

A dollar sign with two vertical lines could have started off as a monogram of 'USA', used on money bags issued by the United States Mint. The letters U and S superimposed resemble the historical double-stroke dollar sign

: the bottom of the 'U' disappears into the bottom curve of the 'S', leaving two vertical lines. It is postulated from the papers of Dr. James Alton James, a professor of history at Northwestern University from 1897-1935, that the symbol with two strokes was an adapted design of the patriot Oliver Pollock in 1778.[9] Oliver Pollock was such a zealous patriot – known as the "Financier of the Revolution in the West" – that conjecture does not overstep its bounds in purporting this theory as viable.[10]

This theory is referred to by the character Owen Kellogg in Ayn Rand's novel Atlas Shrugged.Template:Fact

Another theory is that it derives from "unit of silver", each unit being one "bit" of the "pieces of eight". Before the American Revolution, prices were often quoted in units of the Spanish dollar. According to this theory, when a price was quoted the capital 'S' was used to indicate silver with a capital 'U' written on top to indicate units. Eventually the capital 'U' was replaced by double vertical hash marks.{{ safesubst:#invoke:Unsubst||date=__DATE__ |$B= {{#invoke:Category handler|main}}{{#invoke:Category handler|main}}[citation needed] }}

Another hypothesis is that it derives from the symbol used on a German Thaler. According to Ovason (2004), on one type of thaler one side showed the crucified Christ while the other showed a serpent hanging from a cross, the letters NU near the serpent's head, and on the other side of the cross the number 21. This refers to the Bible, Numbers, Chapter 21 (see Nehushtan).Template:Fact

There is a theory that the dollar sign goes back to the most important Roman coin, the sestertius, which had the letters 'HS' as its currency sign. When superimposed these letters form a dollar sign with two vertical strokes (the horizontal line of the 'H' merging into the 'S').Template:Fact

Robert Morris was the first to use that symbol in official documents and in official communications with Oliver Pollock. The US Dollar was directly based on the Spanish Milled Dollar when, in the Coinage Act of 1792, the first Mint Act, its value was "fixed" (per the U.S. Constitution, Article I, Section 8, clause 1 power of the United States Congress "To coin Money, regulate the Value thereof, and of foreign Coin, and fix the Standard of Weights and Measures") as being "of the value of a Spanish milled dollar as the same is now current, and to contain three hundred and seventy-one grains and four sixteenth parts of a grain of pure, or four hundred and sixteen grains of standard silver."

According to a plaque in St Andrews, Scotland, the dollar sign was first cast into type at a foundry in Philadelphia, United States in 1797 by the Scottish immigrant John Baine.

The plaque in St. Andrews.

Use in computer software

As the dollar sign is one of the few symbols that is, on one hand, almost universally present in computer character sets, but, on the other hand, rarely needed in their literal meaning within computer software, the $ character has been used on computers for many purposes unrelated to money.[15] Its uses in programming languages have often influenced or provoked its uses in operating systems, and applications.

There are no separate characters for one and two line variants. This is font dependent.

{{#invoke:main|main}} In addition to those countries of the world that use dollars or pesos, a number of other countries use the $ symbol to denote their currencies, including:

An exception is the Philippine peso, whose sign is written as ₱.

The dollar sign is also still sometimes used to represent the Malaysian ringgit (which replaced the local dollar), though its official use to represent the currency has been discontinued since 1993.

Some currencies use the cifrão

, similar to the dollar sign, but always with two strokes:

In Mexico and other peso-using countries, the cifrão is used as a dollar sign when a document uses pesos and dollars at the same time, to avoid confusions, but, when it used alone, usually is represented as US $ (United States dollars). Example: US $5 (five US dollars).{{ safesubst:#invoke:Unsubst||date=__DATE__ |$B= {{#invoke:Category handler|main}}{{#invoke:Category handler|main}}[citation needed] }}

However, in Argentina, the $ sign is always used for pesos, and if they want to indicate dollars, they always write U$S 5 or US$ 5 (5 US dollars).

In the United States, Mexico, Australia, Argentina, New Zealand, Hong Kong, Pacific Island nations, and English-speaking Canada, the dollar or peso symbol precedes the number, unlike most currency symbols. Five dollars or pesos is written and printed as $5, whereas five cents is written as 5¢. In French-speaking Canada, the dollar symbol usually appears after the number (5$), although it sometimes appears in front of it, or instead may even be totally absent.

The dollar sign is also used in library cataloging to represent subsections.

Also, it is used derisively to indicate greed or excess money such as in "Micro$oft", "George Luca$", "Lar$ Ulrich", "Di$ney", and "GW$"; or supposed overt Americanization as in "$ky". In 1872, Ambrose Bierce referred to the California Governor as ₤eland $tanford. The dollar sign is also used intentionally to stylize names such as A$AP Rocky and Ke$ha.

|CitationClass=book }} - contains section on the history of the dollar sign, with much documentary evidence supporting the "pesos" theory.