Change of wavelength caused by motion of the source

An animation illustrating how the Doppler effect causes a car engine or siren to sound higher in pitch when it is approaching than when it is receding. The pink circles represent sound waves. 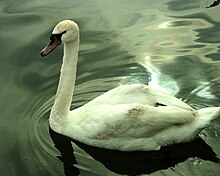 Doppler effect of water flow around a swan

The Doppler effect (or Doppler shift) is the change in frequency of a wave (or other periodic event) for an observer moving relative to its source. It is named after the Austrian physicist Christian Doppler, who proposed it in 1842 in Prague. It is commonly heard when a vehicle sounding a siren or horn approaches, passes, and recedes from an observer. Compared to the emitted frequency, the received frequency is higher during the approach, identical at the instant of passing by, and lower during the recession.

Doppler first proposed this effect in 1842 in his treatise "Über das farbige Licht der Doppelsterne und einiger anderer Gestirne des Himmels" (On the coloured light of the binary stars and some other stars of the heavens).[1] The hypothesis was tested for sound waves by Buys Ballot in 1845.[2] He confirmed that the sound's pitch was higher than the emitted frequency when the sound source approached him, and lower than the emitted frequency when the sound source receded from him. Hippolyte Fizeau discovered independently the same phenomenon on electromagnetic waves in 1848 (in France, the effect is sometimes called "effet Doppler-Fizeau" but that name was not adopted by the rest of the world as Fizeau's discovery was six years after Doppler's proposal).[3] In Britain, John Scott Russell made an experimental study of the Doppler effect (1848).[4]

In classical physics, where the speeds of source and the receiver relative to the medium are lower than the velocity of waves in the medium, the relationship between observed frequency

is the velocity of waves in the medium;

is the velocity of the receiver relative to the medium; positive if the receiver is moving towards the source (and negative in the other direction);

is the velocity of the source relative to the medium; positive if the source is moving away from the receiver (and negative in the other direction).

The frequency is decreased if either is moving away from the other.

are small compared to the speed of the wave, the relationship between observed frequency

we can substitute the geometric expansion:

The frequency of the sounds that the source emits does not actually change. To understand what happens, consider the following analogy. Someone throws one ball every second in a man's direction. Assume that balls travel with constant velocity. If the thrower is stationary, the man will receive one ball every second. However, if the thrower is moving towards the man, he will receive balls more frequently because the balls will be less spaced out. The inverse is true if the thrower is moving away from the man. So it is actually the wavelength which is affected; as a consequence, the received frequency is also affected. It may also be said that the velocity of the wave remains constant whereas wavelength changes; hence frequency also changes. Note that in the ball analogy, the speed of the balls is dependent on the speeds of the thrower and receiver which is not the case of the wavefront velocity which remains constant.

With an observer stationary relative to the medium, if a moving source is emitting waves with an actual frequency

(in this case, the wavelength is changed, the transmission velocity of the wave keeps constant

A similar analysis for a moving observer and a stationary source (in this case, the wavelength keeps constant, but due to the motion, the rate at which the observer receives waves

is changed) yields the observed frequency:

These can be generalized into the equation that was presented in the previous section.

An interesting effect was predicted by Lord Rayleigh in his classic book on sound: if the source is moving at twice the speed of sound, a musical piece emitted by that source would be heard in correct time and tune, but backwards.[6]

"The reason the siren slides is because it doesn't hit you."

In other words, if the siren approached the observer directly, the pitch would remain constant until the vehicle hit him, and then immediately jump to a new lower pitch. Because the vehicle passes by the observer, the radial velocity does not remain constant, but instead varies as a function of the angle between his line of sight and the siren's velocity:

is the angle between the object's forward velocity and the line of sight from the object to the observer. 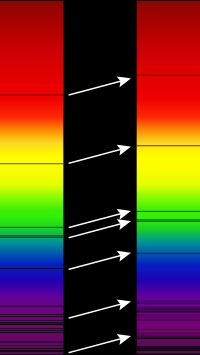 Redshift of spectral lines in the optical spectrum of a supercluster of distant galaxies (right), as compared to that of the Sun (left)

The Doppler effect for electromagnetic waves such as light is of great use in astronomy and results in either a so-called redshift or blueshift. It has been used to measure the speed at which stars and galaxies are approaching or receding from us, that is, the radial velocity. This is used to detect if an apparently single star is, in reality, a close binary and even to measure the rotational speed of stars and galaxies.

The use of the Doppler effect for light in astronomy depends on our knowledge that the spectra of stars are not homogeneous. They exhibit absorption lines at well defined frequencies that are correlated with the energies required to excite electrons in various elements from one level to another. The Doppler effect is recognizable in the fact that the absorption lines are not always at the frequencies that are obtained from the spectrum of a stationary light source. Since blue light has a higher frequency than red light, the spectral lines of an approaching astronomical light source exhibit a blueshift and those of a receding astronomical light source exhibit a redshift.

The Doppler effect is used in some types of radar, to measure the velocity of detected objects. A radar beam is fired at a moving target — e.g. a motor car, as police use radar to detect speeding motorists — as it approaches or recedes from the radar source. Each successive radar wave has to travel farther to reach the car, before being reflected and re-detected near the source. As each wave has to move farther, the gap between each wave increases, increasing the wavelength. In some situations, the radar beam is fired at the moving car as it approaches, in which case each successive wave travels a lesser distance, decreasing the wavelength. In either situation, calculations from the Doppler effect accurately determine the car's velocity taking into account wind speed and direction relative to the car. Moreover, the proximity fuze, developed during World War II, relies upon Doppler radar to detonate explosives at the correct time, height, distance, etc.{{ safesubst:#invoke:Unsubst||date=__DATE__ |$B= {{#invoke:Category handler|main}}{{#invoke:Category handler|main}}[citation needed] }}

An echocardiogram can, within certain limits, produce an accurate assessment of the direction of blood flow and the velocity of blood and cardiac tissue at any arbitrary point using the Doppler effect. One of the limitations is that the ultrasound beam should be as parallel to the blood flow as possible. Velocity measurements allow assessment of cardiac valve areas and function, any abnormal communications between the left and right side of the heart, any leaking of blood through the valves (valvular regurgitation), and calculation of the cardiac output. Contrast-enhanced ultrasound using gas-filled microbubble contrast media can be used to improve velocity or other flow-related medical measurements.

Instruments such as the laser Doppler velocimeter (LDV), and acoustic Doppler velocimeter (ADV) have been developed to measure velocities in a fluid flow. The LDV emits a light beam and the ADV emits an ultrasonic acoustic burst, and measure the Doppler shift in wavelengths of reflections from particles moving with the flow. The actual flow is computed as a function of the water velocity and phase. This technique allows non-intrusive flow measurements, at high precision and high frequency.

Fast moving satellites can have a Doppler shift of dozens of kilohertz relative to a ground station. The speed, thus magnitude of Doppler effect, changes due to earth curvature. Dynamic Doppler compensation, where the frequency of a signal is changed multiple times during transmission, is used so the satellite receives a constant frequency signal.[8]

The Leslie speaker, associated with and predominantly used with the Hammond B-3 organ, takes advantage of the Doppler Effect by using an electric motor to rotate an acoustic horn around a loudspeaker, sending its sound in a circle. This results at the listener's ear in rapidly fluctuating frequencies of a keyboard note.

A laser Doppler vibrometer (LDV) is a non-contact method for measuring vibration. The laser beam from the LDV is directed at the surface of interest, and the vibration amplitude and frequency are extracted from the Doppler shift of the laser beam frequency due to the motion of the surface.

Since 1968 Scientists such as Victor Veselago have speculated about the possibility of an Inverse Doppler effect. An experiment that claimed to have detected this effect was conducted by Nigel Seddon and Trevor Bearpark in Bristol, United Kingdom in 2003.[9]

Researchers from Swinburne University of Technology and the University of Shanghai for Science and Technology showed that this effect can be observed in optical frequencies as well. This was made possible by growing a photonic crystal and projecting a laser beam into the crystal. This made the crystal act like a super prism and the Inverse Doppler Effect could be observed.[10]