Electron diffraction refers to the wave nature of electrons. However, from a technical or practical point of view, it may be regarded as a technique used to study matter by firing electrons at a sample and observing the resulting interference pattern. This phenomenon is commonly known as the wave–particle duality, which states that a particle of matter (in this case the incident electron) can be described as a wave. For this reason, an electron can be regarded as a wave much like sound or water waves. This technique is similar to X-ray and neutron diffraction.

Electron diffraction is most frequently used in solid state physics and chemistry to study the crystal structure of solids. Experiments are usually performed in a transmission electron microscope (TEM), or a scanning electron microscope (SEM) as electron backscatter diffraction. In these instruments, electrons are accelerated by an electrostatic potential in order to gain the desired energy and determine their wavelength before they interact with the sample to be studied.

Apart from the study of crystals i.e. electron crystallography, electron diffraction is also a useful technique to study the short range order of amorphous solids, and the geometry of gaseous molecules. 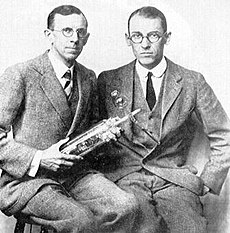 The de Broglie hypothesis, formulated in 1924, predicts that particles should also behave as waves. De Broglie's formula was confirmed three years later for electrons (which have a rest-mass) with the observation of electron diffraction in two independent experiments. At the University of Aberdeen George Paget Thomson passed a beam of electrons through a thin metal film and observed the predicted interference patterns. At Bell Labs Clinton Joseph Davisson and Lester Halbert Germer guided their beam through a crystalline grid. Thomson and Davisson shared the Nobel Prize for Physics in 1937 for their work.

Unlike other types of radiation used in diffraction studies of materials, such as X-rays and neutrons, electrons are charged particles and interact with matter through the Coulomb forces. This means that the incident electrons feel the influence of both the positively charged atomic nuclei and the surrounding electrons. In comparison, X-rays interact with the spatial distribution of the valence electrons, while neutrons are scattered by the atomic nuclei through the strong nuclear forces. In addition, the magnetic moment of neutrons is non-zero, and they are therefore also scattered by magnetic fields. Because of these different forms of interaction, the three types of radiation are suitable for different studies.

In the kinematical approximation for electron diffraction, the intensity of a diffracted beam is given by:

is the wavefunction of the diffracted beam and

is the so-called structure factor which is given by:

is the scattering vector of the diffracted beam,

is the position of an atom

in the unit cell, and

is the scattering power of the atom, also called the atomic form factor. The sum is over all atoms in the unit cell.

The structure factor describes the way in which an incident beam of electrons is scattered by the atoms of a crystal unit cell, taking into account the different scattering power of the elements through the factor

. Since the atoms are spatially distributed in the unit cell, there will be a difference in phase when considering the scattered amplitude from two atoms. This phase shift is taken into account by the exponential term in the equation.

The atomic form factor, or scattering power, of an element depends on the type of radiation considered. Because electrons interact with matter though different processes than for example X-rays, the atomic form factors for the two cases are not the same.

is Planck's constant and

the relativistic momentum of the electron.

is called the de Broglie wavelength. The electrons are accelerated in an electric potential

to the desired velocity:

is the mass of the electron, and

is the elementary charge.The electron wavelength is then given by:

However, in an electron microscope, the accelerating potential is usually several thousand volts causing the electron to travel at an appreciable fraction of the speed of light. An SEM may typically operate at an accelerating potential of 10,000 volts (10 kV) giving an electron velocity approximately 20% of the speed of light, while a typical TEM can operate at 200 kV raising the electron velocity to 70% the speed of light. We therefore need to take relativistic effects into account. The relativistic relation between energy and momentum is E2=p2c2+m02c4[1] and it can be shown that,

where ΔE = E − E0 = eU. The relativistic formula for the wavelength is then modified to become,

is the speed of light. We recognize the first term in this final expression as the non-relativistic expression derived above, while the last term is a relativistic correction factor. The wavelength of the electrons in a 10 kV SEM is then 12.2 x 10−12 m (12.2 pm) while in a 200 kV TEM the wavelength is 2.5 pm. In comparison the wavelength of X-rays usually used in X-ray diffraction is in the order of 100 pm (Cu Kα: λ=154 pm).

Electron diffraction in a TEM

Electron diffraction of solids is usually performed in a Transmission Electron Microscope (TEM) where the electrons pass through a thin film of the material to be studied. The resulting diffraction pattern is then observed on a fluorescent screen, recorded on photographic film, on imaging plates or using a CCD camera.

Furthermore, electron lenses allows the geometry of the diffraction experiment to be varied. The conceptually simplest geometry referred to as selected area electron diffraction (SAED) is that of a parallel beam of electrons incident on the specimen, with the specimen field selected using a sub-specimen image-plane aperture. However, by converging the electrons in a cone onto the specimen, one can in effect perform a diffraction experiment over several incident angles simultaneously. This technique is called Convergent Beam Electron Diffraction (CBED) and can reveal the full three-dimensional symmetry of the crystal.

In a TEM, a single crystal grain or particle may be selected for the diffraction experiments. This means that the diffraction experiments can be performed on single crystals of nanometer size, whereas other diffraction techniques would be limited to studying the diffraction from a multicrystalline or powder sample. Furthermore, electron diffraction in TEM can be combined with direct imaging of the sample, including high resolution imaging of the crystal lattice, and a range of other techniques. These include solving and refining crystal structures by electron crystallography, chemical analysis of the sample composition through energy-dispersive X-ray spectroscopy, investigations of electronic structure and bonding through electron energy loss spectroscopy, and studies of the mean inner potential through electron holography.

1: Sketch of the electron beam-path in a TEM.

2: Typical electron diffraction pattern obtained in a TEM with a parallel electron beam

Figure 1 to the right is a simple sketch of the path of a parallel beam of electrons in a TEM from just above the sample and down the column to the fluorescent screen. As the electrons pass through the sample, they are scattered by the electrostatic potential set up by the constituent elements. After the electrons have left the sample they pass through the electromagnetic objective lens. This lens acts to collect all electrons scattered from one point of the sample in one point on the fluorescent screen, causing an image of the sample to be formed. We note that at the dashed line in the figure, electrons scattered in the same direction by the sample are collected into a single point. This is the back focal plane of the microscope, and is where the diffraction pattern is formed. By manipulating the magnetic lenses of the microscope, the diffraction pattern may be observed by projecting it onto the screen instead of the image. An example of what a diffraction pattern obtained in this way may look like is shown in figure 2.

If the sample is tilted with respect to the incident electron beam, one can obtain diffraction patterns from several crystal orientations. In this way, the reciprocal lattice of the crystal can be mapped in three dimensions. By studying the systematic absence of diffraction spots the Bravais lattice and any screw axes and glide planes present in the crystal structure may be determined.

Electron diffraction in TEM is subject to several important limitations. First, the sample to be studied must be electron transparent, meaning the sample thickness must be of the order of 100 nm or less. Careful and time consuming sample preparation may therefore be needed. Furthermore, many samples are vulnerable to radiation damage caused by the incident electrons.

The study of magnetic materials is complicated by the fact that electrons are deflected in magnetic fields by the Lorentz force. Although this phenomenon may be exploited to study the magnetic domains of materials by Lorentz force microscopy, it may make crystal structure determination virtually impossible.

Furthermore, electron diffraction is often regarded as a qualitative technique suitable for symmetry determination, but too inaccurate for determination of lattice parameters and atomic positions. But there are also several examples where unknown crystal structures (inorganic, organic and biological) have been solved by electron crystallography. Lattice parameters of high accuracy can in fact be obtained from electron diffraction, relative errors less than 0.1% have been demonstrated. However, the right experimental conditions may be difficult to obtain, and these procedures are often viewed as too time consuming and the data too difficult to interpret. X-ray or neutron diffraction are therefore often the preferred methods for determining lattice parameters and atomic positions.