For contributions to the unification of the weak and electromagnetic interaction between elementary particles, Abdus Salam, Sheldon Glashow and Steven Weinberg were awarded the Nobel Prize in Physics in 1979.[1][2] The existence of the electroweak interactions was experimentally established in two stages, the first being the discovery of neutral currents in neutrino scattering by the Gargamelle collaboration in 1973, and the second in 1983 by the UA1 and the UA2 collaborations that involved the discovery of the W and Z gauge bosons in proton–antiproton collisions at the converted Super Proton Synchrotron. In 1999, Gerardus 't Hooft and Martinus Veltman were awarded the Nobel prize for showing that the electroweak theory is renormalizable. 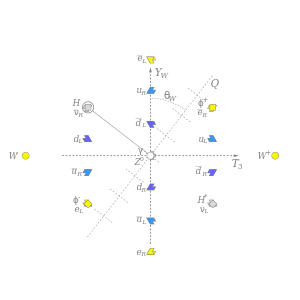 The pattern of weak isospin, T3, and weak hypercharge, YW, of the known elementary particles, showing electric charge, Q, along the weak mixing angle. The neutral Higgs field (circled) breaks the electroweak symmetry and interacts with other particles to give them mass. Three components of the Higgs field become part of the massive W and Z bosons.

In the Standard Model, the [[W and Z bosons|Template:SubatomicParticle and Template:SubatomicParticle bosons]], and the photon, are produced by the spontaneous symmetry breaking of the electroweak symmetry from SU(2) × U(1)Y to U(1)em, caused by the Higgs mechanism (see also Higgs boson).[3][4][5][6] U(1)Y and U(1)em are different copies of U(1); the generator of U(1)em is given by Q = Y/2 + I3, where Y is the generator of U(1)Y (called the weak hypercharge), and I3 is one of the SU(2) generators (a component of weak isospin).

The distinction between electromagnetism and the weak force arises because there is a (nontrivial) linear combination of Y and I3 that vanishes for the Higgs boson (it is an eigenstate of both Y and I3, so the coefficients may be taken as −I3 and Y): U(1)em is defined to be the group generated by this linear combination, and is unbroken because it does not interact with the Higgs.

term describes the interaction between the three W particles and the B particle.

are the field strength tensors for the weak isospin and weak hypercharge fields.

is the kinetic term for the Standard Model fermions. The interaction of the gauge bosons and the fermions are through the gauge covariant derivative.

runs over the three generations of fermions,

are the left-handed doublet and right-handed singlet electron fields.

The y term gives the Yukawa interaction that generates the fermion masses after the Higgs acquires a vacuum expectation value.

The Lagrangian reorganizes itself after the Higgs boson acquires a vacuum expectation value. Due to its complexity, this Lagrangian is best described by breaking it up into several parts as follows.

contains all the quadratic terms of the Lagrangian, which include the dynamic terms (the partial derivatives) and the mass terms (conspicuously absent from the Lagrangian before symmetry breaking)

where the sum runs over all the fermions of the theory (quarks and leptons), and the fields

, (replace X by the relevant field, and fabc with the structure constants for the gauge group).

components of the Lagrangian contain the interactions between the fermions and gauge bosons.

where the electromagnetic current

and the neutral weak current

are the fermions' electric charges and weak isospin.

The charged current part of the Lagrangian is given by

contains the Higgs three-point and four-point self interaction terms.

contains the gauge three-point self interactions.

contains the gauge four-point self interactions

contains the Yukawa interactions between the fermions and the Higgs field.

factors in the weak couplings: these factors project out the left handed components of the spinor fields. This is why electroweak theory (after symmetry breaking) is commonly said to be a chiral theory.

|CitationClass=book }} Conveys much of the Standard Model with no formal mathematics. Very thorough on the weak interaction.