For a general chemical equilibrium

the thermodynamic equilibrium constant can be defined such that, at equilibrium,[1][2]

where curly brackets denote the thermodynamic activities of the chemical species. The right-hand side of this equation corresponds to the reaction quotient Q for arbitrary values of the activities, and becomes the equilibrium constant as shown when the reaction is at equilibrium. The logarithm of this expression appears in the formula for the Gibbs free energy change for the reaction. If deviations from ideal behaviour are neglected, the activities of solutes may be replaced by concentrations, [A], and the activity quotient becomes a concentration quotient, Kc.

Kc is defined as equal to the thermodynamic equilibrium constant but with concentrations of reactants and products instead of activity coefficients. (Kc appears here to have units of concentration raised to some power while K

A knowledge of equilibrium constants is essential for the understanding of many chemical systems, as well as biochemical processes such as oxygen transport by hemoglobin in blood and acid-base homeostasis in the human body.

The stepwise constant, K, for the formation of the same complex from ML and L is given by

A cumulative constant can always be expressed as the product of stepwise constants. There is no agreed notation for stepwise constants, though a symbol such as KTemplate:Su is sometimes found in the literature. It is best always to define each stability constant by reference to an equilibrium expression.

The formation constant of [Pd(CN)4]2- was determined by the competition method.

In organic chemistry and biochemistry it is customary to use pKa values for acid dissociation equilibria.

On the other hand stability constants for metal complexes, and binding constants for host-guest complexes are generally expressed as association constants. When considering equilibria such as

it is customary to use association constants for both ML and HL. Also, in generalized computer programs dealing with equilibrium constants it is general practice to use cumulative constants rather than stepwise constants and to omit ionic charges from equilibrium expressions. For example, if NTA, nitrilotriacetic acid, N(CH2CO2H)3 is designated as H3L and forms complexes ML and MHL with a metal ion M, the following expressions would apply for the dissociation constants.

The cumulative association constants can be expressed as

Note how the subscripts define the stoichiometry of the equilibrium product.

When two or more sites in an asymmetrical molecule may be involved in an equilibrium reaction there are more than one possible equilibrium constants. For example, the molecule L-dopa has two non-equivalent hydroxyl groups which may be deprotonated. Denoting L-Dopa as LH2, the following diagram shows all the species that may be formed (X=CH2CH(NH2)CO2H) 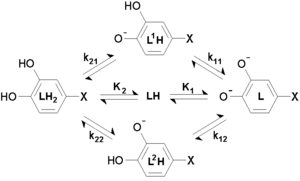 The first protonation constants are

In the same way,

Lastly, the cumulative constant is

Thus, although there are six micro-and macro-constants, only three of them are mutually independent. Moreover, the isomerization constant, Ki, is equal to the ratio of the microconstants.

In L-Dopa the isomerization constant is 0.9, so the micro-species L1H and L2H have almost equal concentrations at all pH values.

In the approximation of ideal behaviour, activity is replaced by concentration. pH is measured by means of a glass electrode, a mixed equilibrium constant, also known as a Brønsted constant, may result.

Conditional constants, also known as apparent constants, are concentration quotients which are not true equilibrium constants but can be derived from them.[6] A very common instance is where pH is fixed at a particular value. For example, in the case of iron(III) interacting with EDTA, a conditional constant could be defined by

This conditional constant will vary with pH. It has a maximum at a certain pH. That is the pH where the ligand sequesters the metal most effectively.

In biochemistry equilibrium constants are often measured at a pH fixed by means of a buffer solution. Such constants are, by definition, conditional and different values may be obtained when using different buffers.

For equilibria in a gas phase, fugacity, f, is used in place of activity. However, fugacity has the dimension of pressure, so it must be divided by a standard pressure, usually 1 bar, in order to produce a dimensionless quantity, f / p

. An equilibrium constant is expressed in terms of the dimensionless quantity. For example, for the equilibrium 2NO2 Template:Eqm N2O4,

For a general chemical equilibrium

the thermodynamic definition of the equilibrium constant is that, at equilibrium,

where {A} is the activity, at equilibrium, of the chemical species A, etc.[7] It is conventional to put the activities of the products in the numerator and those of the reactants in the denominator. Since activity is a dimensionless quantity, the thermodynamic equilibrium constant, K

, is also a dimensionless quantity. This is important because K

is related to the standard free energy change, ΔG

R is the gas constant and T the absolute or thermodynamic temperature. Taking the logarithm of K

is only possible when K

The symbol [A] stands for a generalized concentration or partial pressure of the chemical species A, The activity coefficients, γ, are dimensionless and cA

remains dimensionless. so the expression simplifies to 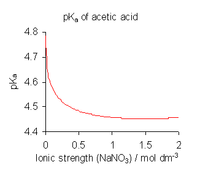 Variation of log Kc of acetic acid with ionic strength

It follows that the "Concentration constant", Kc, is related to the thermodynamic equilibrium constant by

Note that when Kc is defined in this way it has no dimension, so log Kc is permissible.

When an equilibrium constant value is to be determined, there are three options for dealing with the activity coefficients.

Kc appears to have the dimension of concentration to the power z, the difference of the sums of the powers in the numerator and denominator: Template:Nowrap beginz = ρ + σ + ... − (α + β + ...)Template:Nowrap end. It must in fact be dimensionless or it would not be possible to take its logarithm. The illusion is the result of omitting the standard concentrations from the defining expression. Nevertheless it is not unusual, particularly in texts relating to biochemical equilibria, to see a value quoted with a dimension. Some examples are as follows

where the symbol M signifies a molar concentration (1 M = 1 mol dm−3). In writing these expressions, there is an implicit assumption that the quotient of activity coefficients is equal to 1. Furthermore, the subscript c is often omitted, implying that the concentration quotient is a thermodynamic equilibrium constant, in the sense defined above. In these cases, the unit in effect specifies the concentration scale to which the concentrations [A], [B], etc. refer. Implicitly, the standard concentrations are on that scale, too.

In speciation calculations one must define the equilibrium constant as a quotient of concentrations, K = QE. Then, the equilibrium constant has dimensions, such as M−1 (mol−1 dm3) or mM−1 (mmol−1 dm3), a unit sometimes used in biochemistry. For example, for the formation of an adduct A + B Template:Eqm AB the concentrations [A] and [B] can be calculated by solving the equations of mass-balance.

Temperature, T, is assumed to be constant in the following treatment.

A general chemical equilibrium can be written as

The chemical potential, μi, of the ith species can be calculated in terms of its activity, ai.

is the standard chemical potential of the species, R is the gas constant and T is the temperature. Setting the sum for the reactants j to be equal to the sum for the products, k, so that δGr(Eq) = 0

to an equilibrium constant, K, the reaction quotient of activity values at equilibrium.

shows that when the reaction is exothermic (ΔH

is negative), then K decreases with increasing temperature, in accordance with Le Chatelier's principle. It permits calculation of the reaction equilibrium constant at temperature T2 if the reaction constant at T1 is known and the standard reaction enthalpy can be assumed to be independent of temperature even though each standard enthalpy change is defined at a different temperature. However, this assumption is valid only for small temperature differences T2 − T1. In fact standard thermodynamic arguments can be used to show that

where Cp is the heat capacity at constant pressure. The equilibrium constant is related to the standard Gibbs energy change of reaction as

is the standard Gibbs free energy change of reaction, R is the gas constant, and T the absolute temperature.

Here, the term "standard" denotes the ideal behaviour (i.e., an infinite dilution) and a hypothetical standard concentration (typically 1 mol/kg). It does not imply any particular temperature or pressure because, although contrary to IUPAC recommendation, it is more convenient when describing aqueous systems over wide temperature and pressure ranges.[11]

The standard Gibbs energy (for each species or for the entire reaction) can be represented (from the basic definitions) as:

Now, if one expresses the standard heat capacity Cp

, as a function of absolute temperature using correlations of the following forms:[12]

then the integrals can be evaluated and the following final form is obtained:

The constants A, B, C, a, b and the absolute entropy,

, required for evaluation of Cp

(T), as well as the values of G298 K and S298 K for many species are tabularized in the literature.

The pressure dependence of the equilibrium constant is usually weak in the range of pressures normally encountered in industry, and therefore, it is usually neglected in practice. This is true for condensed reactant/products (i.e., when reactants and products are solids or liquid) as well as gaseous ones.

For a gaseous-reaction example, one may consider the well-studied reaction of hydrogen with nitrogen to produce ammonia:

In the example reaction above, the number of moles changes from 4 to 2, and an increase of pressure by system compression will result in appreciably more ammonia in the equilibrium mixture. In the general case of a gaseous reaction:

the change of mixture composition with pressure can be quantified using:

The above change in composition is in accordance with Le Chatelier's principle and does not involve any change of the equilibrium constant with the total system pressure. Indeed, for ideal-gas reactions Kp is independent of pressure.[13] 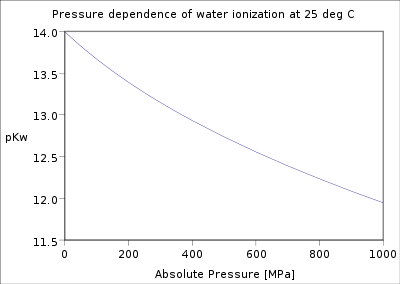 Pressure dependence of the water ionization constant at 25 °C. In general, ionization in aqueous solutions tends to increase with increasing pressure.

In a condensed phase, the pressure dependence of the equilibrium constant is associated with the reaction molar volume.[14] For reaction:

the reaction molar volume is:

where Template:Overline denotes a partial molar volume of a reactant or a product.

For the above reaction, one can expect the change of the reaction equilibrium constant (based either on mole-fraction or molal-concentration scale) with pressure at constant temperature to be:

The matter is complicated as partial molar volume is itself dependent on pressure.