Informally, a Euclidean plane isometry is any way of transforming the plane without "deforming" it. For example, suppose that the Euclidean plane is represented by a sheet of transparent plastic sitting on a desk. Examples of isometries include:

These are examples of translations, rotations, and reflections respectively. There is one further type of isometry, called a glide reflection (see below under classification of Euclidean plane isometries).

However, folding, cutting, or melting the sheet are not considered isometries. Neither are less drastic alterations like bending, stretching, or twisting.

An isometry of the Euclidean plane is a distance-preserving transformation of the plane. That is, it is a map

such that for any points p and q in the plane,

where d(p, q) is the usual Euclidean distance between p and q.

It can be shown that there are four types of Euclidean plane isometries. (Note: the notations for the types of isometries listed below are not completely standardised.)

These matrices are the orthogonal matrices (i.e. each is a square matrix G whose transpose is its inverse, i.e.

), with determinant 1 (the other possibility for orthogonal matrices is −1, which gives a mirror image, see below). They form the special orthogonal group SO(2).

or in other words,

Alternatively, a rotation around the origin is performed, followed by a translation:

The set of translations and rotations together form the rigid motions or displacements. This set forms a group under composition, the group of rigid motions, a subgroup of the full group of Euclidean isometries.

and then we obtain the reflection of p by subtraction,

or in other words,

(It is also true that

that is, we obtain the same result if we do the translation and the reflection in the opposite order.)

Alternatively we multiply by an orthogonal matrix with determinant −1 (corresponding to a reflection in a line through the origin), followed by a translation. This is a glide reflection, except in the special case that the translation is perpendicular to the line of reflection, in which case the combination is itself just a reflection in a parallel line.

In all cases we multiply the position vector by an orthogonal matrix and add a vector; if the determinant is 1 we have a rotation, a translation, or the identity, and if it is −1 we have a glide reflection or a reflection.

A "random" isometry, like taking a sheet of paper from a table and randomly laying it back, "almost surely" is a rotation or a glide reflection (they have three degrees of freedom). This applies regardless of the details of the probability distribution, as long as θ and the direction of the added vector are independent and uniformly distributed and the length of the added vector has a continuous distribution. A pure translation and a pure reflection are special cases with only two degrees of freedom, while the identity is even more special, with no degrees of freedom.

Reflections, or mirror isometries, can be combined to produce any isometry. Thus isometries are an example of a reflection group.

In the Euclidean plane, we have the following possibilities.

Two reflections in the same mirror restore each point to its original position. All points are left fixed. Any pair of identical mirrors has the same effect.

As Alice found through the looking-glass, a single mirror causes left and right hands to switch. (In formal terms, topological orientation is reversed.) Points on the mirror are left fixed. Each mirror has a unique effect.

Two distinct intersecting mirrors have a single point in common, which remains fixed. All other points rotate around it by twice the angle between the mirrors. Any two mirrors with the same fixed point and same angle give the same rotation, so long as they are used in the correct order.

Two distinct mirrors that do not intersect must be parallel. Every point moves the same amount, twice the distance between the mirrors, and in the same direction. No points are left fixed. Any two mirrors with the same parallel direction and the same distance apart give the same translation, so long as they are used in the correct order.

Three mirrors. If they are all parallel, the effect is the same as a single mirror (slide a pair to cancel the third). Otherwise we can find an equivalent arrangement where two are parallel and the third is perpendicular to them. The effect is a reflection combined with a translation parallel to the mirror. No points are left fixed.

Adding more mirrors does not add more possibilities (in the plane), because they can always be rearranged to cause cancellation.

Proof. An isometry is completely determined by its effect on three independent (not collinear) points. So suppose p1, p2, p3 map to q1, q2, q3; we can generate a sequence of mirrors to achieve this as follows. If p1 and q1 are distinct, choose their perpendicular bisector as mirror. Now p1 maps to q1; and we will pass all further mirrors through q1, leaving it fixed. Call the images of p2 and p3 under this reflection p2′ and p3′. If q2 is distinct from p2′, bisect the angle at q1 with a new mirror. With p1 and p2 now in place, p3 is at p3′′; and if it is not in place, a final mirror through q1 and q2 will flip it to q3. Thus at most three reflections suffice to reproduce any plane isometry. ∎

We can recognize which of these isometries we have according to whether it preserves hands or swaps them, and whether it has at least one fixed point or not, as shown in the following table (omitting the identity).

Isometries requiring an odd number of mirrors — reflection and glide reflection — always reverse left and right. The even isometries — identity, rotation, and translation — never do; they correspond to rigid motions, and form a normal subgroup of the full Euclidean group of isometries. Neither the full group nor the even subgroup are abelian; for example, reversing the order of composition of two parallel mirrors reverses the direction of the translation they produce.

Proof. The identity is an isometry; nothing changes, so distance cannot change. And if one isometry cannot change distance, neither can two (or three, or more) in succession; thus the composition of two isometries is again an isometry, and the set of isometries is closed under composition. The identity isometry is also an identity for composition, and composition is associative; therefore isometries satisfy the axioms for a semigroup. For a group, we must also have an inverse for every element. To cancel a reflection, we merely compose it with itself. (Reflections are involutions.) And since every isometry can be expressed as a sequence of reflections, its inverse can be expressed as that sequence reversed. Notice that the cancellation of a pair of identical reflections reduces the number of reflections by an even number, preserving the parity of the sequence; also notice that the identity has even parity. Therefore all isometries form a group, and even isometries a subgroup. (Odd isometries do not include the identity, so are not a subgroup.) This subgroup is a normal subgroup, because sandwiching an even isometry between two odd ones yields an even isometry. ∎

Composition of isometries mixes kinds in assorted ways. We can think of the identity as either two mirrors or none; either way, it has no effect in composition. And two reflections give either a translation or a rotation, or the identity (which is both, in a trivial way). Reflection composed with either of these could cancel down to a single reflection; otherwise it gives the only available three-mirror isometry, a glide reflection. A pair of translations always reduces to a single translation; so the challenging cases involve rotations. We know a rotation composed with either a rotation or a translation must produce an even isometry. Composition with translation produces another rotation (by the same amount, with shifted fixed point), but composition with rotation can yield either translation or rotation. It is often said that composition of two rotations produces a rotation, and Euler proved a theorem to that effect in 3D; however, this is only true for rotations sharing a fixed point. 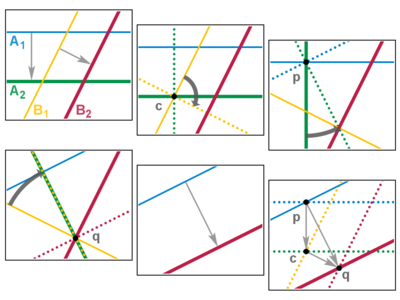 Proof. If two rotations share a fixed point, then we can swivel the mirror pair of the second rotation to cancel the inner mirrors of the sequence of four (two and two), leaving just the outer pair. Thus the composition of two rotations with a common fixed point produces a rotation by the sum of the angles about the same fixed point.
If two translations are parallel, we can slide the mirror pair of the second translation to cancel the inner mirror of the sequence of four, much as in the rotation case. Thus the composition of two parallel translations produces a translation by the sum of the distances in the same direction. Now suppose the translations are not parallel, and that the mirror sequence is A1, A2 (the first translation) followed by B1, B2 (the second). Then A2 and B1 must cross, say at c; and, reassociating, we are free to pivot this inner pair around c. If we pivot 90°, an interesting thing happens: now A1 and A2′ intersect at a 90° angle, say at p, and so do B1′ and B2, say at q. Again reassociating, we pivot the first pair around p to make B2″ pass through q, and pivot the second pair around q to make A1″ pass through p. The inner mirrors now coincide and cancel, and the outer mirrors are left parallel. Thus the composition of two non-parallel translations also produces a translation. Also, the three pivot points form a triangle whose edges give the head-to-tail rule of vector addition: 2(p c) + 2(c q) = 2(p q). ∎

The subgroup structure suggests another way to compose an arbitrary isometry:

Pick a fixed point, and a mirror through it.

The subgroups discussed so far are not only infinite, they are also continuous (Lie groups). Any subgroup containing at least one non-zero translation must be infinite, but subgroups of the orthogonal group can be finite. For example, the symmetries of a regular pentagon consist of rotations by integer multiples of 72° (360° / 5), along with reflections in the five mirrors which perpendicularly bisect the edges. This is a group, D5, with 10 elements. It has a subgroup, C5, of half the size, omitting the reflections. These two groups are members of two families, Dn and Cn, for any n > 1. Together, these families constitute the rosette groups.

Translations do not fold back on themselves, but we can take integer multiples of any finite translation, or sums of multiples of two such independent translations, as a subgroup. These generate the lattice of a periodic tiling of the plane.

We can also combine these two kinds of discrete groups — the discrete rotations and reflections around a fixed point and the discrete translations — to generate the frieze groups and wallpaper groups. Curiously, only a few of the fixed-point groups are found to be compatible with discrete translations. In fact, lattice compatibility imposes such a severe restriction that, up to isomorphism, we have only 7 distinct frieze groups and 17 distinct wallpaper groups. For example, the pentagon symmetries, D5, are incompatible with a discrete lattice of translations. (Each higher dimension also has only a finite number of such crystallographic groups, but the number grows rapidly; for example, 3D has 320 groups and 4D has 4783.)

Isometries in the complex plane

In terms of complex numbers, the isometries of the plane are either of the form

or of the form

This is obviously related to the previous classification of plane isometries, since:

where the last expression shows the mapping equivalent to rotation at 0 and a translation. Therefore, given direct isometry

as the center for an equivalent rotation, provided that