listen (help·info)) (1608–1647) was an Italian physicist and mathematician, best known for his invention of the barometer, but is also known for his advances in optics.

Torricelli was born on 15 October in 1608 in Rome, the firstborn child of Gaspare Ruberti and Giacoma (Jacoba) Torricelli. His family was from Faenza in the Province of Ravenna, then part of the Papal States. His father was a textile worker and the family was very poor. Seeing his talents, his parents sent him to be educated in Faenza, under the care of his uncle, Jacobo, a Camaldolese monk, who first ensured that his nephew was given a sound basic education. He then entered young Torricelli into a Jesuit College in 1624, possibly the one in Faenza itself, to study mathematics and philosophy until 1626, by which time his father, Gaspare, had died. The uncle then sent Torricelli to Rome to study science under the Benedictine monk Benedetto Castelli, professor of mathematics at the Collegio della Sapienza (now known as the Sapienza University of Rome).[1] Castelli was a student of Galileo Galilei.[2] "Benedetto Castelli made experiments on running water (1628), and he was entrusted by Pope Urban VIII with hydraulic undertakings."[3] Because of this, Torricelli was exposed to experiments funded by Pope Urban VIII. While living in Rome, Torricelli became also the student of the brilliant mathematician, Bonaventura Cavalieri, with whom he became great friends.[2]

In 1632, shortly after the publication of Galileo's Dialogues of the New Science, Torricelli wrote to Galileo of reading it "with the delight [...] of one who, having already practiced all of geometry most diligently [...] and having studied Ptolemy and seen almost everything of Tycho Brahe, Kepler and Longomontanus, finally, forced by the many congruences, came to adhere to Copernicus, and was a Galileian in profession and sect". (The Vatican condemned Galileo in June 1633, and this was the only known occasion on which Torricelli openly declared himself to hold the Copernican view.)

Aside from several letters, little is known of Torricelli's activities in the years between 1632 and 1641, when Castelli sent Torricelli's monograph of the path of projectiles to Galileo, then a prisoner in his villa at Arcetri. Although Galileo promptly invited Torricelli to visit, he did not accept until just three months before Galileo's death. The reason for this was that Torricelli's mother, Caterina Angetti, died.[2] "(T)his short intercourse with the great mathematician enabled Torricelli to finish the fifth dialogue under the personal direction of its author; it was published by Viviani, another pupil of Galileo, in 1674."[3] After Galileo's death on 8 January 1642, Grand Duke Ferdinando II de' Medici asked him to succeed Galileo as the grand-ducal mathematician and chair of mathematics at the University of Pisa. Right before the appointment, Torricelli was considering returning to Rome because of there being nothing left for him in Florence.[2] In this role he solved some of the great mathematical problems of the day, such as finding a cycloid's area and center of gravity. As a result of this study, he wrote the book the Opera Geometrica in which he described his observations. The book was published in 1644.[2] Little was known about Torricelli in regard to his works in geometry when he accepted the honorable position, but after he published Opera Geometrica two years later, he became highly esteemed in that discipline.[4] "He was interested in Optics, and invented a method whereby microscopic lenses might be made of glass which could be easily melted in a lamp."[3] As a result, he designed and built a number of telescopes and simple microscopes; several large lenses, engraved with his name, are still preserved in Florence. On 11 June 1644, he famously wrote in a letter to Michelangelo Ricci:

Noi viviamo sommersi nel fondo d'un pelago d'aria. (We live submerged at the bottom of an ocean of air.)[5]

Evangelista Torricelli by Lorenzo Lippi (circa 1647, Galleria Silvano Lodi & Due) 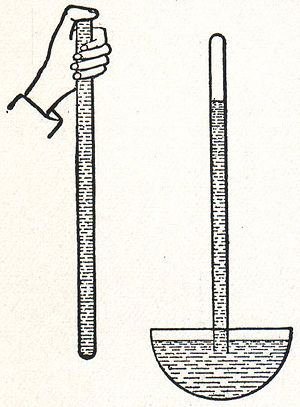 Torricelli died in Florence on 25 October 1647, a few days after having contracted typhoid fever, and was buried at the Basilica of San Lorenzo. He left all his belongings to his adopted son Alessandro. "Belonging to that first period are his pamphlets on Solidi spherali, Contatti and the major part of the propositions and sundry problems which were gathered together by Viviani after Torricelli's death. This early work owes much to the study of the classics."[2] In Faenza, a statue of Torricelli was created in 1868 as a thank you for all that Torricelli had done in advancing science during his short lifetime.[3] The asteroid 7437 Torricelli and a crater on the Moon were named in his honor.

The perusal of Galileo's Two New Sciences (1638) inspired him with many developments of the mechanical principles there set forth, which he embodied in a treatise De motu (printed amongst his Opera geometrica, 1644). Its communication by Castelli to Galileo in 1641, with a proposal that Torricelli should reside with him, led to Torricelli traveling to Florence, where he met Galileo, and acted as his amanuensis during the three remaining months of his life.

Torricelli's chief invention was the mercury barometer. "This instrument is named from two Greek words, signifying two measures of weight, since by it a column of air is weighed against a column of mercury."[6] The barometer arose from the need to solve a practical problem. Pump makers of the Grand Duke of Tuscany attempted to raise water to a height of 12 meters or more, but found that 10 meters was the limit with a suction pump (as recounted in Galileo's Dialogue). Torricelli employed mercury, fourteen times more dense than water. In 1643 he created a tube approximately one meter long, sealed at the top, filled it with mercury, and set it vertically into a basin of mercury. The column of mercury fell to about 76 cm, leaving a Torricellian vacuum above. As we now know, the column's height fluctuated with changing atmospheric pressure; this was the first barometer. The discovery of the principle of the barometer has perpetuated his fame ("Torricellian tube", "Torricellian vacuum"). The torr, a unit of pressure used in vacuum measurements, is named after him. "12 years before Torricelli's observations, Descartes, the French philosopher, had made the same observation, although he does not appear to have turned it to any account."[6]

Torricelli also discovered Torricelli's Law, regarding the speed of a fluid flowing out of an opening, which was later shown to be a particular case of Bernoulli's principle. "Evangelista Torricelli found that water leaks out a small hole in the bottom of a container at a rate proportional to the square root of the depth of the water. So if the container is an upright cylinder with a small leak at the bottom and y is the depth of the water at time t, then

The Study of Projectiles

Torricelli studied a lot about projectile and how they traveled through the air. "Perhaps his most notable achievement in the field of projectiles was to establish for the first time the idea of an envelope: projectiles sent out at the same angle and the same speed in all directions trace out parabolas which are all tangent to a common paraboloid. This envelope became known as the parabola di sicurezza."[2]

Torricelli gave the first scientific description of the cause of wind:

... winds are produced by differences of air temperature, and hence density, between two regions of the earth.[1]

Torricelli is also famous for the discovery of the Torricelli's trumpet (also - perhaps more often - known as Gabriel's Horn) whose surface area is infinite, but whose volume is finite. This was seen as an "incredible" paradox by many at the time, including Torricelli himself, and prompted a fierce controversy about the nature of infinity, also involving the philosopher Hobbes. It is supposed by some to have led to the idea of a "completed infinity". Torricelli tried several alternative proofs, attempting to prove that its surface area was also finite - all of which failed.{{ safesubst:#invoke:Unsubst||date=__DATE__ |$B= {{#invoke:Category handler|main}}{{#invoke:Category handler|main}}[citation needed] }}

Torricelli was also a pioneer in the area of infinite series. In his De dimensione parabolae of 1644, Torricelli considered a decreasing sequence of positive terms

and showed the corresponding telescoping series

, where L is the limit of the sequence, and in this way gives a proof of the formula for the sum of a geometric series.

His manuscripts are preserved at Florence, Italy. The following have appeared in print: