In photography, exposure value (EV) is a number that represents a combination of a camera's shutter speed and f-number, such that all combinations that yield the same exposure have the same EV value (for any fixed scene luminance). Exposure value is also used to indicate an interval on the photographic exposure scale, with 1 EV corresponding to a standard power-of-2 exposure step, commonly referred to as a stop.[1]

The EV concept was developed in an attempt to simplify choosing among combinations of equivalent camera settings, by the German shutter manufacturer Template:Ill in the 1950s (Ray 2000, 318). Exposure value was originally indicated by the quantity symbol

; this symbol continues to be used in ISO standards, but the acronym EV is more common elsewhere.

Although all camera settings with the same EV nominally give the same exposure, they do not necessarily give the same picture. The f-number (relative aperture) determines the depth of field, and the shutter speed (exposure time) determines the amount of motion blur, as illustrated by the two images at the right (and at long exposure times, as a second-order effect, the light-sensitive medium may exhibit reciprocity failure, which is a change of light sensitivity dependent on the irradiance at the film).

EV 0 corresponds to an exposure time of 1 s and a relative aperture of f/1.0. If the EV is known, it can be used to select combinations of exposure time and f-number, as shown in Table 1.

Each increment of 1 in exposure value corresponds to a change of one “step” (or, more commonly, one “stop”) in exposure, i.e., half as much exposure, either by halving the exposure time or halving the aperture area, or a combination of such changes. Greater exposure values are appropriate for photography in more brightly lit situations, or for higher ISO speeds.

"Exposure value" actually indicates combinations of camera settings rather than the photometric quantity of luminous exposure Hv (aka photometric exposure), which is given by (Ray 2000, 310)

The illuminance Ev is controlled by the f-number but also depends on the scene luminance Lv. To avoid confusion, some authors (Ray 2000, 310) have used camera exposure to refer to combinations of camera settings. The 1964 ASA standard for automatic exposure controls for cameras, ASA PH2.15-1964, took the same approach, and also used the more descriptive term camera exposure settings.

Common practice among photographers is nonetheless to use “exposure” to refer to camera settings as well as to photometric exposure.

EV as an indicator of camera settings

EV corresponds simply to a combination of a shutter speed and an aperture setting, independent of any ISO setting—independent even of whether there is film in the camera or any light available.

Popular exposure chart type, showing exposure values EV (red lines) as combinations of aperture and shutter speed values. The green lines are sample program lines, by which a digital camera automatically selects both the shutter speed and the aperture for given exposure value (brightness of light), when set to Program mode (P).Canon

An exposure meter may not always be available, and using a meter to determine exposure for some scenes with unusual lighting distribution may be difficult. However, natural light, as well as many scenes with artificial lighting, is predictable, so that exposure often can be determined with reasonable accuracy from tabulated values.

Exposure values in Table 2 are reasonable general guidelines, but they should be used with caution. For simplicity, they are rounded to the nearest integer, and they omit numerous considerations described in the ANSI exposure guides from which they are derived. Moreover, they take no account of color shifts or reciprocity failure. Proper use of tabulated exposure values is explained in detail in the ANSI exposure guide, ANSI PH2.7-1986.

To photograph a rainbow against a cloudy sky with an ISO 50–speed imaging medium, search Table 2 for "Rainbows-Cloudy sky background" (which has an EV of 14), and subtract 1 to get EV50 = 13.

The equation for correcting for ISO speed is sometimes shown with a minus sign, and an online calculator implements that version at dpreview.com.[4] In that case, the value being calculated is an EV100 or light value (LV),[4] a representation of light meter reading or light level appropriate to the camera EV setting at the given speed:

For example, setting the camera for EV 11 and using ISO 400 films allows shooting night sports at a light level of EV100 = 9, in agreement with the example done the other way around above.

Setting EV on a camera 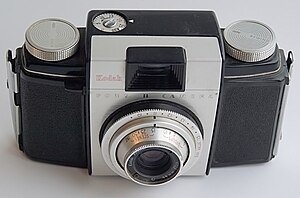 On most cameras, there is no direct way to transfer an EV to camera settings; however, a few cameras, such as some Voigtländer and Braun models or the Kodak Pony II shown in the photo, allowed direct setting of exposure value.

Some medium-format cameras from Rollei (Rolleiflex, Rolleicord models) and Hasselblad allowed EV to be set on the lenses. The set EV could be locked, coupling shutter and aperture settings, such that adjusting either the shutter speed or aperture made a corresponding adjustment in the other to maintain a constant exposure. On some lenses the locking was optional, so that the photographer could choose the preferred method of working depending on the situation. Use of the EV scale on Hasselblad cameras is discussed briefly by Adams (1981), 39).

Many current cameras allow for exposure compensation, and usually state it in terms of EV (Ray 2000, 316). In this context, EV refers to the difference between the indicated and set exposures. For example, an exposure compensation of +1 EV (or +1 step) means to increase exposure, by using either a longer exposure time or a smaller

Some light meters (e.g., Pentax spot meters) indicate directly in EV at ISO 100. Some other meters, especially digital models, can indicate EV for the selected ISO speed. In most cases, this difference is irrelevant; with the Pentax meters, camera settings usually are determined using the exposure calculator, and most digital meters directly display shutter speeds and

Recently, articles on many web sites have used light value (LV) to denote EV at ISO 100. However, this term does not derive from a standards body, and has had several conflicting definitions.

Relationship of EV to lighting conditions

Applied to the right-hand side of the exposure equation, exposure value is

Camera settings also can be determined from incident-light measurements, for which the exposure equation is

In terms of exposure value, the right-hand side becomes

When applied to the left-hand side of the exposure equation, EV denotes actual combinations of camera settings; when applied to the right-hand side, EV denotes combinations of camera settings required to give the nominally “correct” exposure. The formal relationship of EV to luminance or illuminance has limitations. Although it usually works well for typical outdoor scenes in daylight, it is less applicable to scenes with highly atypical luminance distributions, such as city skylines at night. In such situations, the EV that will result in the best picture often is better determined by subjective evaluation of photographs than by formal consideration of luminance or illuminance.

For a given luminance and film speed, a greater EV results in less exposure, and for fixed exposure (i.e., fixed camera settings), a greater EV corresponds to greater luminance or illuminance.

where Av (aperture value) and Tv (time value) were defined as:

Av and Tv represent the numbers of stops from Template:F/1 and 1 second, respectively.

Use of APEX required logarithmic markings on aperture and shutter controls, however, and these never were incorporated in consumer cameras. With the inclusion of built-in exposure meters in most cameras shortly after APEX was proposed, the need to use the exposure equation was eliminated, and APEX saw little actual use.

Though it remains of little interest to the end user, APEX has seen a partial resurrection in the Exif standard, which calls for storing exposure data using APEX values. See Use of APEX values in Exif for additional discussion.

EV as a measure of luminance and illuminance

For a given ISO speed and meter calibration constant, there is a direct relationship between exposure value and luminance (or illuminance). Strictly, EV is not a measure of luminance or illuminance; rather, an EV corresponds to a luminance (or illuminance) for which a camera with a given ISO speed would use the indicated EV to obtain the nominally correct exposure. Nonetheless, it is common practice among photographic equipment manufacturers to express luminance in EV for ISO 100 speed, as when specifying metering range (Ray 2000, 318) or autofocus sensitivity. And the practice is long established; Ray (2002), 592) cites Ulffers (1968) as an early example. Properly, the meter calibration constant as well as the ISO speed should be stated, but this seldom is done.

Values for the reflected-light calibration constant K vary slightly among manufacturers; a common choice is 12.5 (Canon, Nikon, and Sekonic[6]). Using K = 12.5, the relationship between EV at ISO 100 and luminance L is then

As with luminance, common practice among photographic equipment manufacturers is to express illuminance in EV for ISO 100 speed when specifying metering range.[7]

The situation with incident-light meters is more complicated than that for reflected-light meters, because the calibration constant C depends on the sensor type. Two sensor types are common: flat (cosine-responding) and hemispherical (cardioid-responding). Illuminance is measured with a flat sensor; a typical value for C is 250 with illuminance in lux. Using C = 250, the relationship between EV at ISO 100 and illuminance E is then

Exposure meter calibration is discussed in detail in the Light meter article.